2Q-16 Market Commentary- Should I Stay or Should I Go?

That was the question Brits faced in their June 23rd voter referendum seeking an answer as to their desire to remain a member of the European Union (EU) or to leave.  Global market volatility increased as we drew closer to the Brexit referendum with stocks gaining ground when polling sentiment was in favor of staying within the EU and then selling off if sentiment indicated the Brits wanted out.  Back and forth it went until a final rally on June 22nd when the consensus opinion predicted the U.K. would remain in the EU.  So much for the smart money as the only poll that mattered came on June 23rd when 52% of voters said they wanted a divorce from the EU and its foreign governing elites who exercised too much control over British sovereignty.  Of course, it wasn’t unanimous, with Scotland, Northern Ireland and London voting in favor of remaining within the EU.

As everyone knows by now, markets across the world sold off sharply with the news and it appeared the second quarter would end with a dud or worse.  Over the next two trading days U.S. markets dropped about 5% and international markets fared worse, as would be expected.  Then a remarkable thing happened on the way to an all-out panic.  After recovering from the initial shock investors realized that it will take at least a couple of years for the divorce to be worked out and all of the world’s great companies are still in business making and selling products and services.  The sky didn’t fall, markets stabilized and over the next four trading days, regained almost all of their losses. Go figure!

Following an incredible three-year gain of 77%, stocks have been in a side-ways trading range for the past 18 months as earnings have slowed.  However, we remain within a whisper of all-time highs and it is no wonder with inflation almost non-existent and alternative investments like bonds offering such low returns. Even though GDP (gross domestic product) has slowed, some economists believe our economy may actually be operating at or near full capacity and simply can’t grow much faster due to current regulations, taxes and entitlements which act as disincentives to take risks or seek employment. 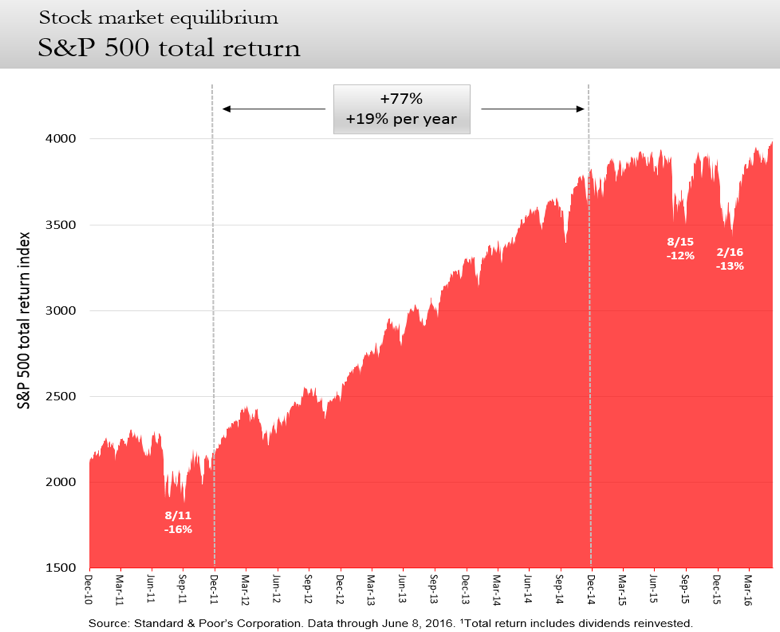 One impact of the Brexit vote was a strong belief that global growth will slow which sent interest rates plunging world-wide.  As an example, the 10-Year U.S. Treasury note hit an all-time intra-day low of 1.385% and as of this writing, the long bond (30-Year Treasury bond) is yielding a paltry 2.22%, another record low.  These low rates are great news for borrowers but not so great for lenders, especially those retired investors who rely on interest payments to supplement their incomes.  It is what it is.

After the Brexit sell-off reversed course, most stocks posted positive returns during the second quarter of 2016.  U.S. markets’ returns ranged from a low of 2.46% for the largest companies (S&P 500) to a high of 3.99% for mid-cap companies (S&P 400).  International markets were mixed with developed international markets (MSCI EAFE) posting a loss of -1.46% as one of its largest components is the U.K.  Emerging international markets gained 0.66% for the period.  Over-all, the quarter turned out very nicely for those with broadly diversified portfolios.   With the exception of the aforementioned MSCI EAFE (Europe, Australasia and the Far East) the first half of 2016 was a banner period for stocks.  Mid-cap U.S. companies lead the way with gains of 7.93% for the year’s first six months, followed close behind by emerging international markets, up 6.41%.  MSCI EAFE ended the first half down -4.42%.

Our bond benchmark (Barclays Capital 1-5 Year Government/Credit index) returned 0.98% and 2.60% for the 2nd quarter and first half of 2016, respectively.  Longer bonds fared even better as falling interest rates cause bond prices to rise.

According to a June 13th article in the Wall Street Journal, earnings may be set to grow as analysts’ estimates haven’t fallen as sharply as usual, fewer companies are warning of expected reduced earnings and the rebound in oil prices has improved the prior drag from the energy sector.  Standard and Poor’s is predicting a 12% earnings growth trajectory through 2017 which may be too high but even half that pace would be welcome. Additionally, the market is not showing signs of “irrational exuberance” which is typical of over-bought conditions, so if earnings grow we could certainly see higher stock prices over the next 18 months.

There is little doubt that the Brexit vote will complicate things for all involved and increases the risk of other countries following suit which could result in the EU coming apart.  Unlike the decision the Brits faced, when it comes to investing, the question is not a matter of staying in the market or getting out, since your commitment should not change in anticipation of, or in response to such geo-political events.  These events are impossible to predict consistently and investors who jump in and out trying to avoid short-term pain run the risk of being on the wrong side of the market, potentially putting years of prudent saving and investing at risk. The percentage of your financial assets allocated to stocks (for growth), bonds (for income and stability), and cash (for liquidity) should instead be the result of a comprehensive and objective planning process designed to offer you a reasonable likelihood of achieving your goals without unnecessary risk.  No more, no less.

If there is one thing you could do in the wake of the Brexit vote, it would be to take a vacation to the U.K. now that the British pound has fallen significantly relative to the U.S. dollar.

Best wishes for the remainder of the summer.