2021 ended with the Federal Reserve caught between countervailing forces of the Omicron COVID-19 variant which threatens another economic slowdown, and inflation, now running at the highest levels in four decades. The Fed maintained its ultra-accommodative policies for so long that inflation overshot its target and remains elevated. It now finds itself trying to reverse course without taking away the punch bowl prematurely and ruining the party. If the Fed is going to orchestrate a smooth economic landing it will need the skill and timing of the Flying Wallendas. 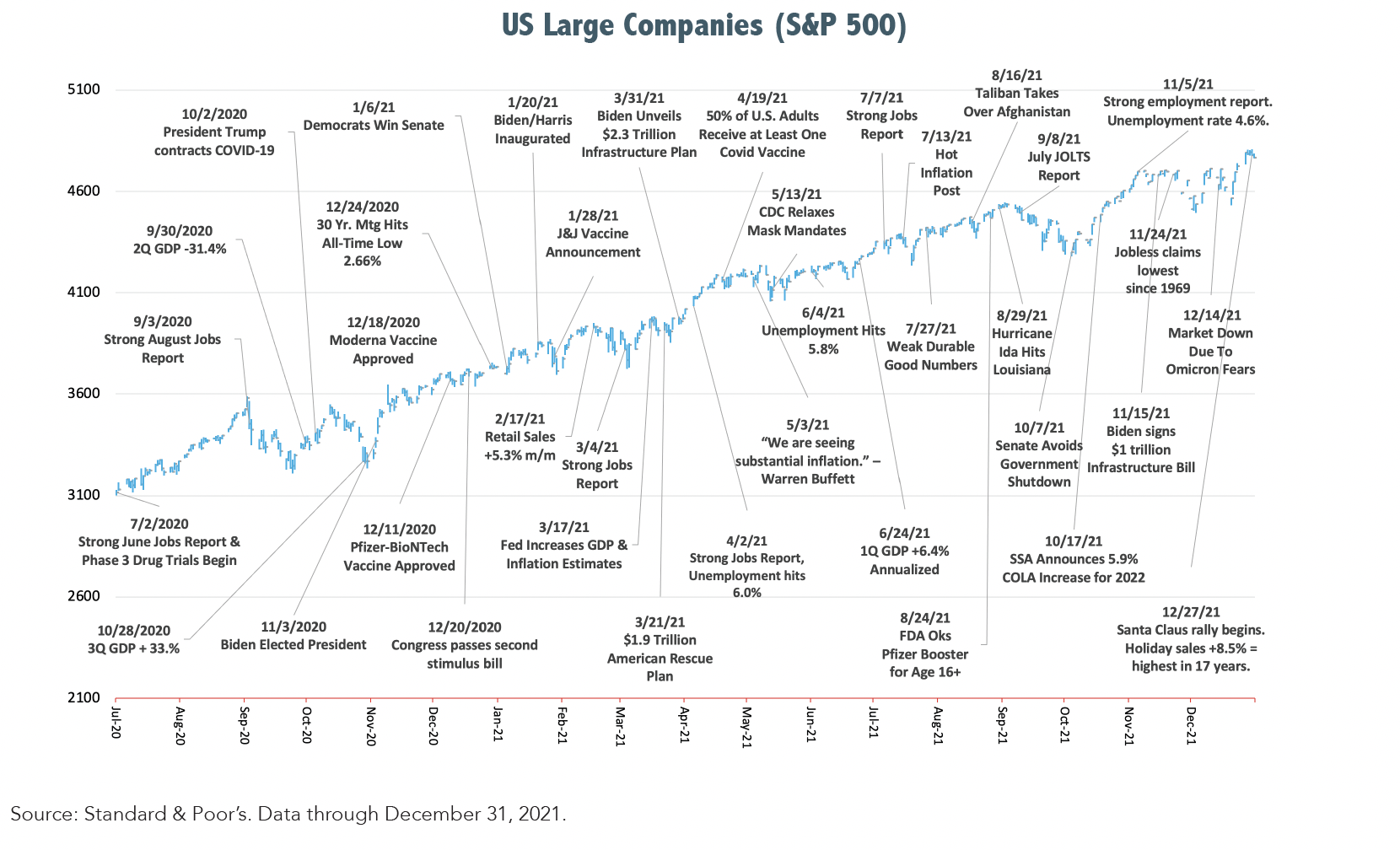 Despite Omicron induced fears and inflation induced pain, equity markets marched onward and upward in the 4thquarter bringing 2021’s performance to a spectacular climax as U.S. stocks posted a third consecutive year with above-average gains. The year’s bullish sentiment was the result of low interest rates, excessive fiscal and monetary stimulus, strong earnings growth, and a belief that we are getting closer to the end of the COVID-19 pandemic. Large (S&P 500), small (S&P SmallCap 600), and mid-sized (S&P MidCap 400) companies delivered full year returns of 28%, 26% and 24% respectively among broadly diversified domestic benchmarks. Across the pond, developed international stocks (MSCI EAFE) produced respectable gains of 11% for 2021, but emerging markets (MSCI EM) continued to disappoint with losses of -2.5%. Bonds stalled as interest rates began a slow rise in anticipation of Fed tightening. Our short-term corporate bond benchmark, the Bloomberg 1-5 Year Credit posted a small loss of -0.55% for 2021. Bonds prices typically fall when interest rates rise, with shorter duration bonds being less sensitive to rate movements than longer maturities.

COVID-19 cases in the U.S. have picked up dramatically, with 486,428 new cases reported on December 29, 2021, compared to earlier waves’ daily peaks of 294,016 (January 2021) and 182,905 (September 2021). 7-day moving averages hit 316,277 per day for the period ending December 29, 2021, compared to 250,435 on January 11, 2021, the previous high-watermark. The impacts from this new wave on the economy, financial markets and Fed policy is still unknown, but a silver lining appears to be much fewer hospitalizations and deaths as a percentage of the higher daily cases compared with previous waves leading many to believe we are getting close to herd immunity. 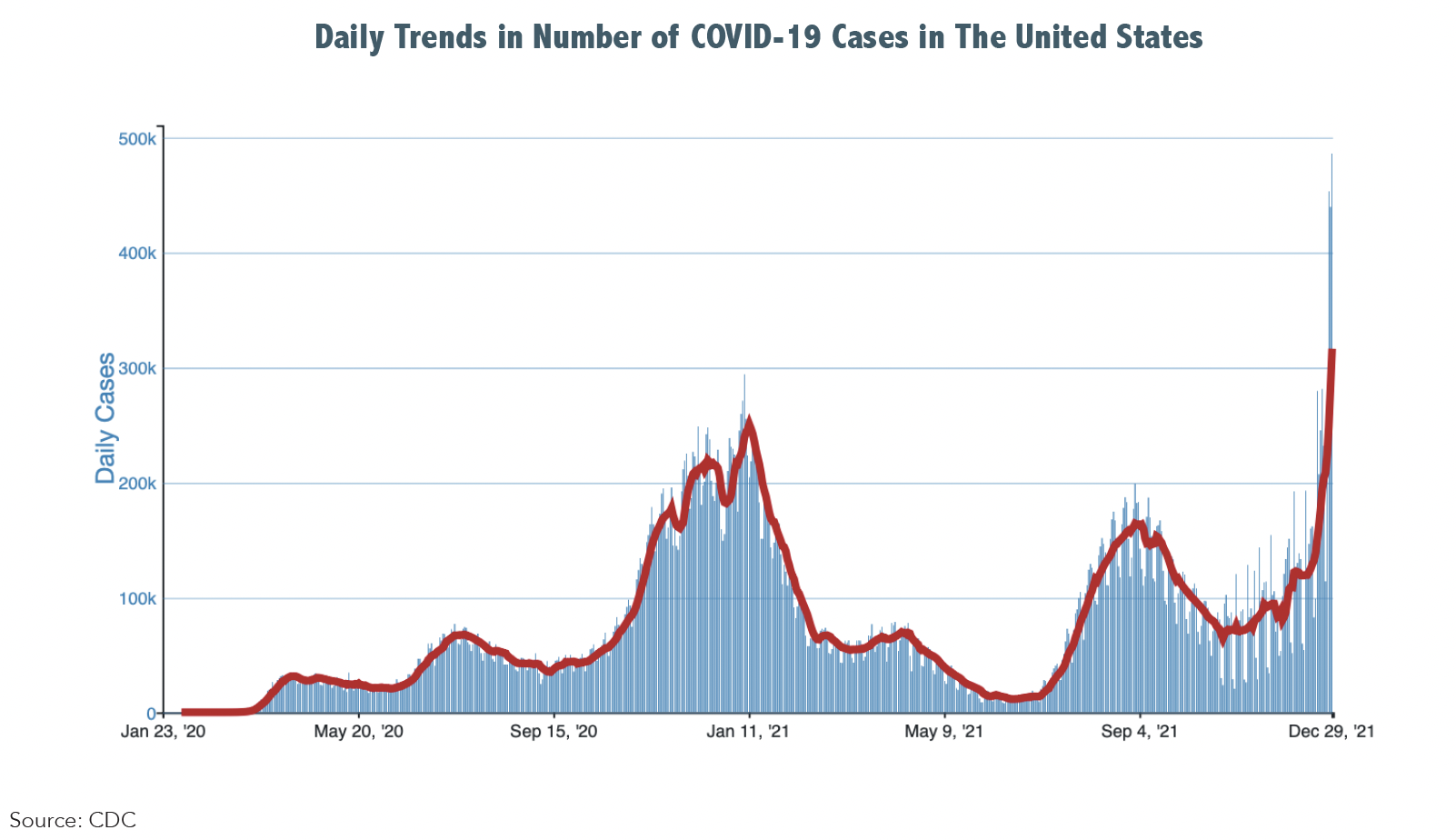 The Fed appears to have mis-calculated in its attempt to allow inflation to run above its long-held 2% target rate until it reached an average of 2%. It changed its policy to an “average inflation” target in August 2020 to allow the economic recovery to gain a solid footing, repeatedly stating its opinion that inflation pressures would subside as the trillions of stimulus dollars circulating through the economy were spent. That hasn’t happened, and the Fed now admits it misjudged the impacts from supply chain interruptions and no longer thinks inflation will be transitory. The Fed pivoted from ultra-accommodative easing to slightly less accommodative in announcing plans to sequentially ratchet down its purchase of Treasury bonds and agency mortgage-backed securities from an earlier $120 billion monthly rate, ending its “quantitative easing” by March 2022.  Additionally, it says it will now likely raise the target range for the fed funds rate three times in 2022 and more in 2023. There has been no mention of when it might start reducing its balance sheet.

With the exception of supply chain bottlenecks and the imbalance between job openings and people seeking employment, the U.S. economy is hitting on most cylinders. The Atlanta Fed’s GDPNow model is projecting GDP (Gross Domestic Product) real growth (after inflation) of 7.4% annualized for 4Q21. The employment picture is admittedly quirky, but positive. Unemployment claims have fallen back down to the level of March 2020 when the pandemic was just getting underway. The latest unemployment rate has dropped to 3.9%, a number many consider to be full employment, and yet there are still 10.6 million job openings. The biggest risks to continued growth currently appear to be from exacerbated supply chain disruptions if more people resist the need to work in-person in response to the Omicron variant, and additionally, rapidly rising interest rates should the Fed decide to become more hawkish in response to continued elevated inflation. 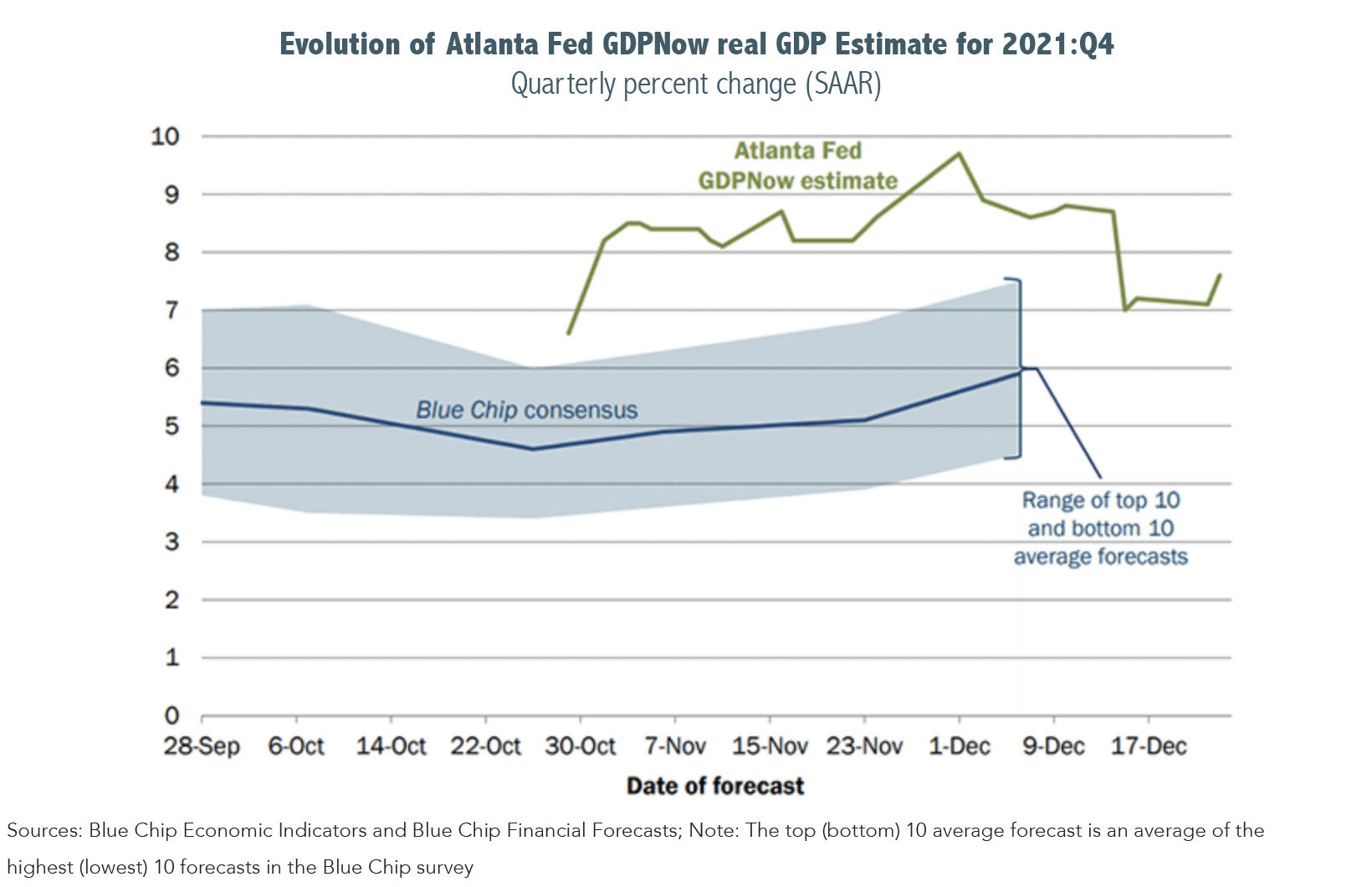 Stocks experienced a P/E (price/earnings) multiple expansion in the wake of the Federal Reserve’s ultra-accommodative monetary policies aided by ultra-aggressive fiscal stimulus from the numerous programs shoveled out by Congress. Even with rising inflation, yields from investments such as bonds, bank time deposits and money market accounts offered little attraction as alternatives to equities. The forward-looking P/E ratio for the S&P 500 has gone from a low of 13.4 at the bottom of the sell-off on March 23, 2020, to a high of 23.1 by early September 2021.  It currently sits at 21.3, and while down from the September high, that is still a 28% premium to its 10-year average. That does not mean stocks will not continue to advance in 2022 given the large amounts of cash on the sidelines, monetary policy that is still accommodative, negative real interest rates and earnings growth estimates that are still strong.

2022 should see a slowdown in the economy as the lift from the various stimulus programs winds down.  COVID-19 and inflation remain the two wild cards for now. Omicron appears to be less virulent than the Alpha and Delta variants but more contagious. In an abundance of caution many businesses, schools and institutions are reinstating measures that risk slowing or even reversing our record economic recovery.  Will the Fed be able to tap gently on its monetary brakes without throwing us into a recession should consumer spending reverse course in the face of Omicron, or will it continue to allow an accommodative policy risking higher inflation for even longer periods? This is the Fed’s dilemma as it finds itself betwixt and between these potential outcomes in attempting to fulfill its dual mandates of full employment and moderate inflation. 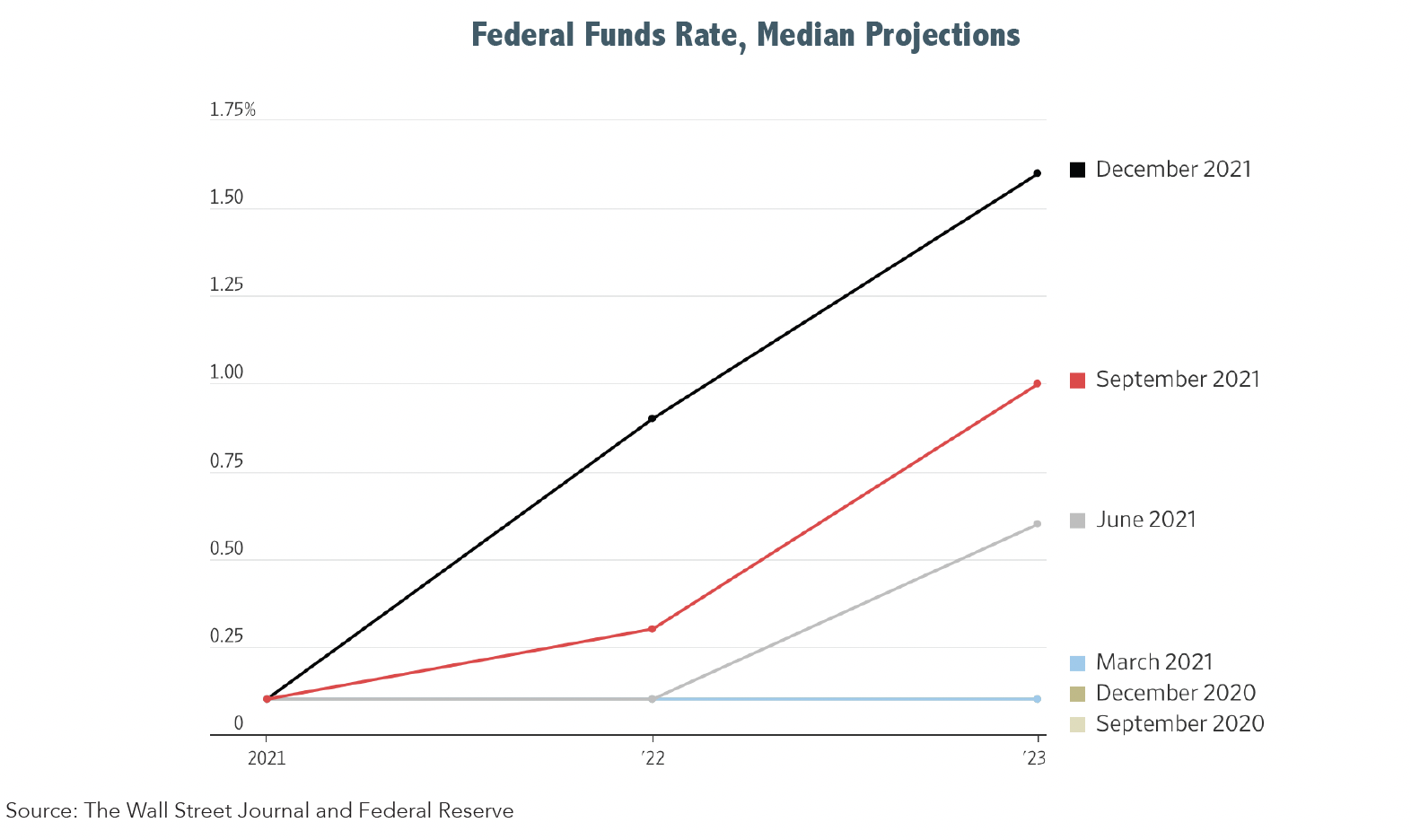 Long-term, goal-focused investors needn’t worry. That’s because achieving their life’s goals does not depend on being able to predict inflation or interest rates. Nor do they need to spend a nanosecond overly concerned about equity valuations. Companies’ share prices swing like a pendulum from being over-valued to under-valued and back again. All an investor needs to do is remain fully committed to their personal investment strategy, guided by a prudently crafted financial plan and sound advice from a team of experienced, dedicated professionals committed to that investor’s success.