Equities spent most of this year’s second quarter backing and filling, caught between two countervailing forces, until finally pushing through to new highs by the end of June.  Blowout earnings reports and upwardly revised earnings forecasts elevated prices, while simultaneously, P/E (Price/Earnings) contraction from higher inflation concerns exerted downward pressure.  Growth has been so good that some are finding it hard to believe it can last, which has resulted in a “peak growth” narrative predicting strong headwinds ahead for equities.  The market may have appeared quiet, but there was a lot of turbulence underneath as evidenced by extreme speculation in meme stocks, cryptocurrencies, NFTs (non-fungible tokens), and SPACs (Special-Purpose Acquisition Companies).  The quarter also saw an increased focus on interest rates and Federal Reserve monetary policies.  The bond market’s inflection point came in July 2020 when yields on the 10-Year U.S. Treasury Note bottomed at an all-time low of 0.50% and then marched upward to a recent high of 1.75%.  At that point yields hit a ceiling and became range-bound lending more credence to the Fed’s “transitory” inflation argument.  At the end of 2Q-21 the 10-Year Note stood at 1.45%. 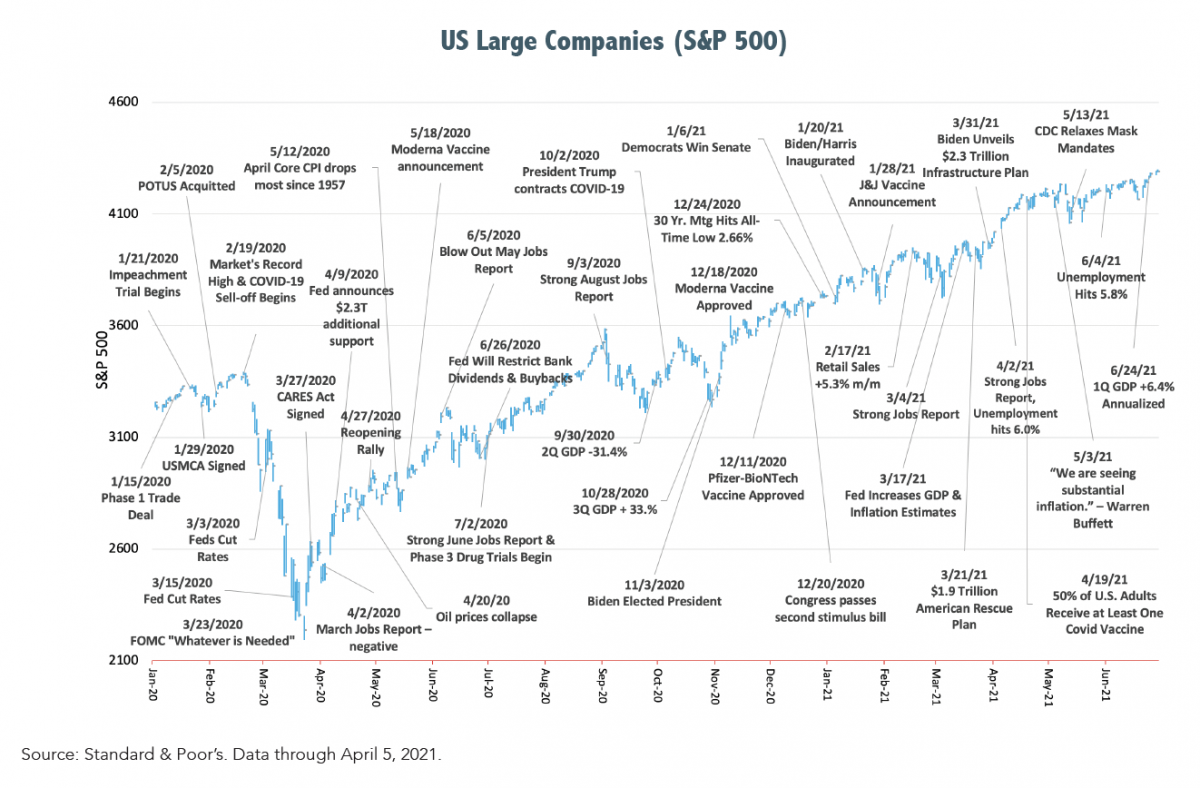 Inflation shocks continued making headlines during the quarter.  Consumer prices, as measured by the CPI (Consumer Price Index), rose 5% year-over-year in May, the fastest increase in thirteen years.  Not to be outdone, wholesale prices, as measured by the PPI (Producer Price Index), increased year-over-year by 6.6%.  The Fed’s preferred inflation gauge, the PCE (Personal Consumption Expenditures) gained 3.9% year-over-year, and core PCE which excludes food and energy was up 3.5%, a 30-year high.  These elevated inflation rates are partly due to comparisons with last year’s “base-effect” numbers, when prices plummeted because of collapsing demand during the economic shut down. Going forward, as the base-effects diminish, the month-over-month comparisons will be more revealing than year-over-year numbers.  The Fed’s oft-stated view is that price increases will be “transitory”, a short-lived consequence of what former Fed Chairman Ben Bernanke coined helicopter money, in this case, cash raining down to consumers and businesses from the various stimulus programs.  The Federal Reserve believes that once those funds circulate through the economy pricing pressures will abate.  Only time will tell if recent above-trend inflation proves transitory or more enduring. 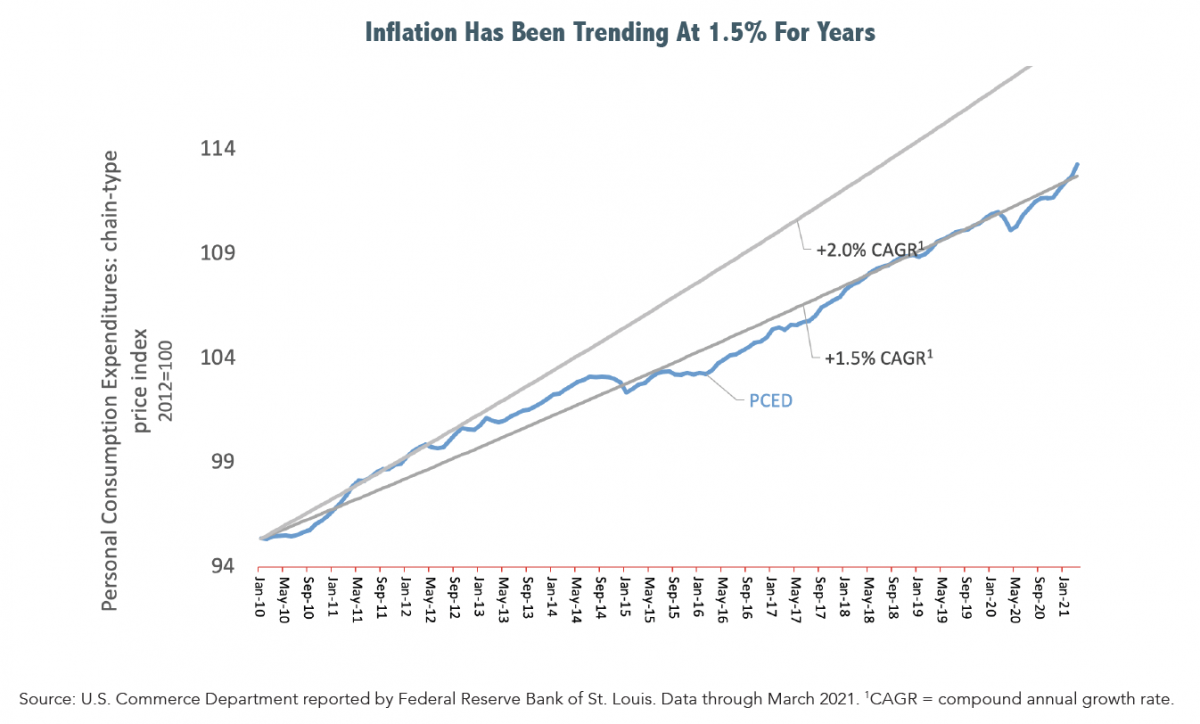 The economic recovery has been unprecedented in speed and scope, albeit from extremely depressed levels after the world’s economies went dark.  In the depths of the recession economists and policy makers thought it would take years to recover, but it is now believed the nation’s economic output, as measured by GDP (Gross Domestic Product), may have surpassed pre-pandemic levels by the quarter just ended.  Some economists are forecasting that by year-end, U.S. GDP will be at the level it would have reached had the pandemic never happened.  That is truly remarkable and primarily due to a trifecta of influences including consumers with trillions in extra cash trying to get their lives back to normal, companies eager to hire and get their businesses back to normal and the massive policy support from the FOMC (Federal Open Market Committee) trying to get the entire nation back to normal.

Given the strength of the recovery, some FOMC board members suggested at their mid-June meeting that the Fed consider tapering its monthly asset purchases (also known as quantitative easing) sooner than earlier anticipated.  Currently, the Fed is buying $120 billion per month in U.S. Treasuries and mortgage-backed securities as part of its two-pronged approach to stimulate the economy.  As to the other prong, there was also talk that the first hike in the Fed Funds rate may come in 2023, rather than 2024 as previously communicated.  This talk spooked the market which fell precipitously on the news, but it then regained all of its losses the following week after Chairman Powell and others reiterated they will be in no hurry to take their foot off the accommodative gas pedal and will be very transparent in their policy directives.  The market’s over-riding concern is the possibility that the Federal Reserve mis-judges the strength of the economy and over-shoots with its easy-money policies, resulting in unintended negative consequences in the severity, duration and impacts of inflation.  Much of the recent price spikes is due to the speed of the snap-back in the economy and subsequent supply constraints as companies struggle to re-hire and re-tool to respond to the tremendous release of pent-up demand.  While still elevated, many commodities from copper to lumber have dropped from their peak pandemic prices, easing some concerns about an inflationary spiral. 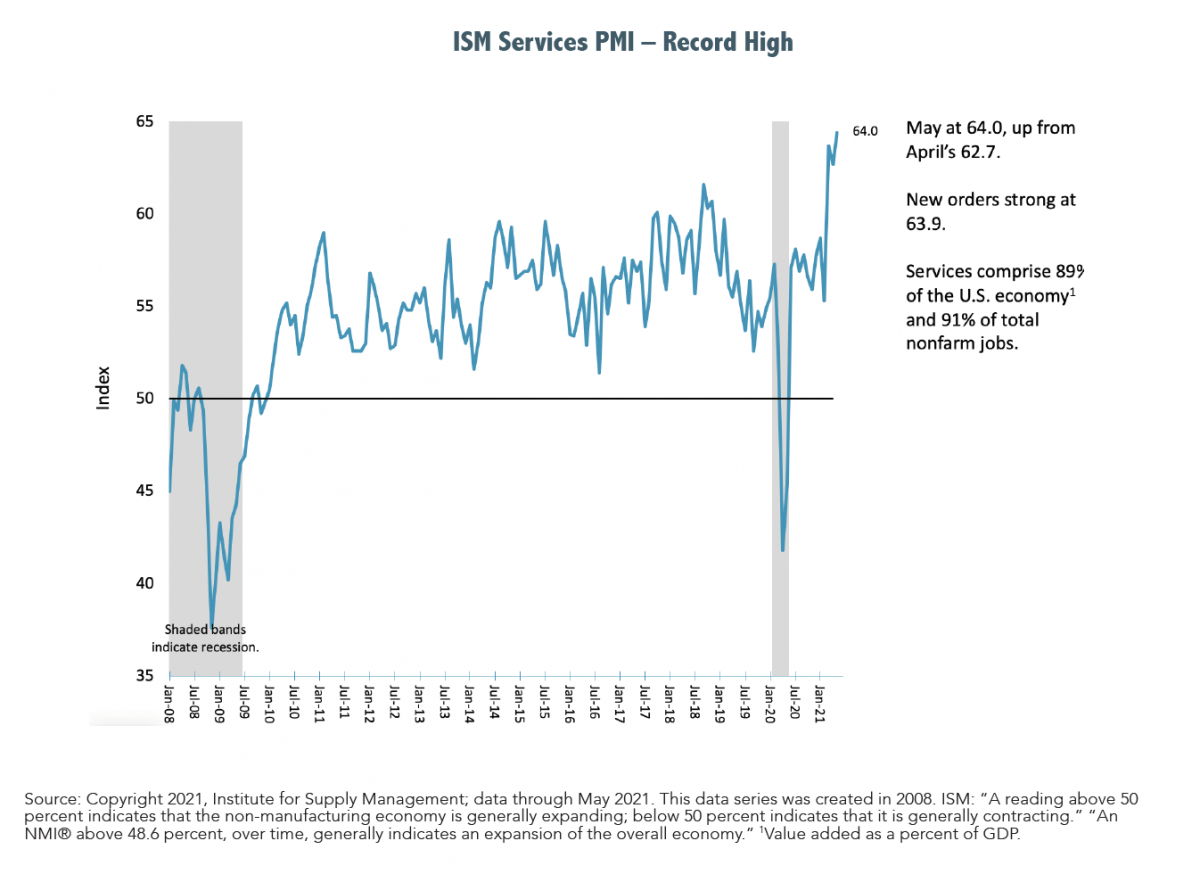 The U.S. economy appears strong and strengthening as evidenced by numerous readings and surveys.  The current forecast for second quarter real GDP is 8.3% (annualized) and a whopping 7.0% for the full year.  For 2022 the Fed is projecting 3.2% real GDP growth which may appear tame compared to this year, but the average GDP for the 10-year period ending 2019 was 2.3%.  A June poll of 100 economists by Reuters showed an increase in growth and inflation forecasts.  The ISM Services PMI Index, which measures the service sector’s purchasing activity, hit a record high 64.0 in May.  This is an important gauge to watch since services comprise 89% of the U.S. economy and 91% of non-farm jobs.  Another important gauge is the housing market because it impacts so much of the economy due to ancillary industries such as building materials, appliances, furnishings, etc.  Housing starts hit 1.57 million units in April, well above the pandemic lows but also below the 1.6 – 1.8 million units consistent with long-term demographics and the replacement of the existing housing stock. This means there is room to run for continued growth in housing construction, another bullish economic sign.  The Conference Board’s LEI (Leading Economic Index) hit an all-time high in May and suggests strong economic growth will continue in the near-term. 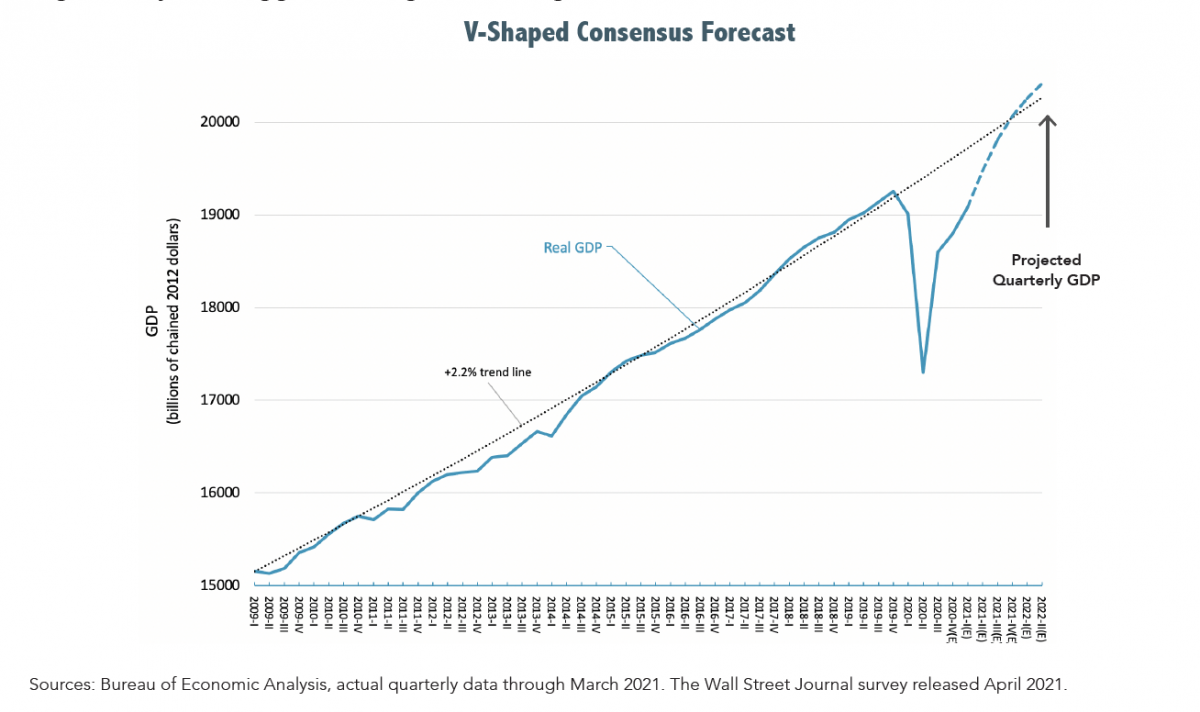 Ironically, as the economy re-awakens from its COVID-induced hibernation, one of the biggest challenge’s companies face is finding qualified workers.  The JOLTS (Job Openings and Labor Turnover) report revealed job openings reached 9.3 million in April, the highest number in the twenty years the BLS (Bureau of Labor Statistics) has been tracking that data.  Openings are pervasive across most industries including restaurants, retailers, truckers, and airlines, among others.  Many business owners believe the enhanced unemployment benefits are creating a disincentive for those out of work to seek employment.  Others believe a segment of the population is simply not willing to rejoin the labor force until COVID vaccination rates increase.  Another explanation is that some people are in a temporary holding pattern, currently re-assessing their former career choices and contemplating hitting the re-start button on a different career path.  Even though the unemployment rate has dropped from 14.7% in April 2020 to 5.8% currently, there are still 7.6 million fewer people in the labor force now as compared to February 2020.  The unemployment rate is one statistic the FOMC points to when explaining its current accommodative stance. 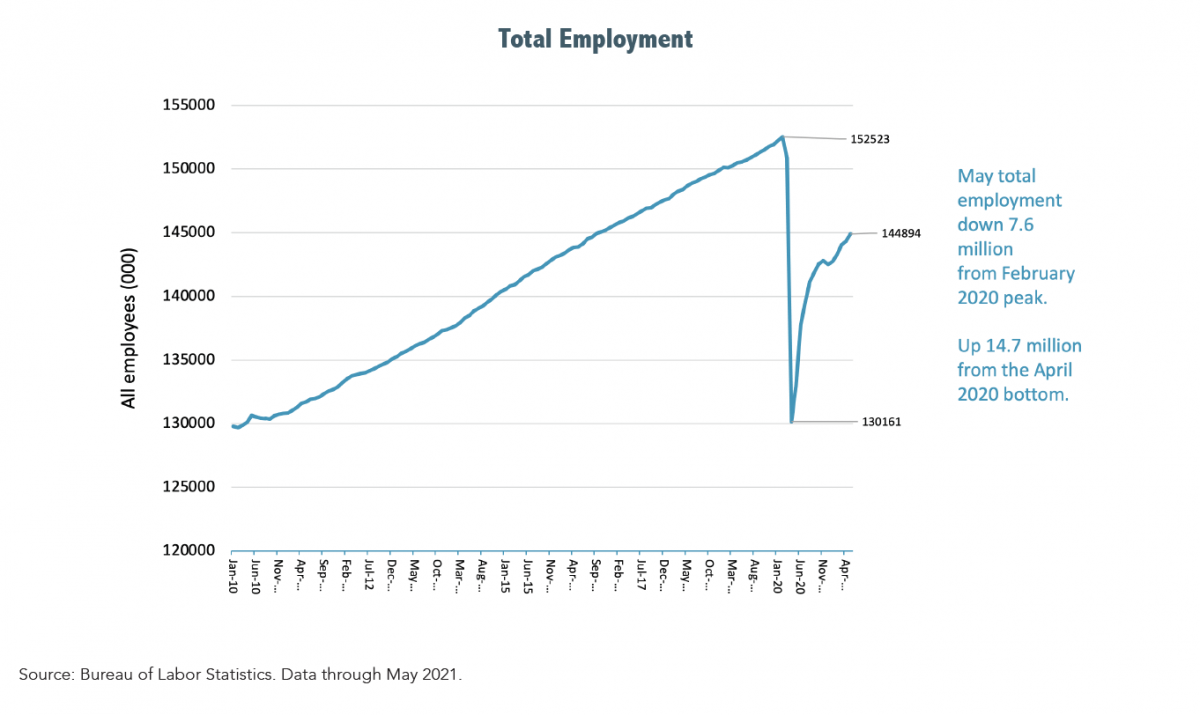 Is the equity market over-valued?  That depends on your perspective.  In Barron’s annual survey of 10 leading Wall Street strategists published December 21, 2020, their year-end 2021 predictions for the S&P 500 ranged from a low of 3,800 to a high of 4,400.  At 2Q-21’s end, the S&P 500 stood at 4,297, up 8.55% for the period and 15.25% year-to-date (including dividends). Stock prices are primarily driven by earnings, but also by other factors such as the aforementioned interest rate and inflation expectations. The consensus earnings forecast for the S&P 500 is $189.61 and $212.12 for 2021 and 2022, respectively.  At 4,297 stocks are trading at 22 times 2021 earnings estimates and 20 times 2022 estimates.  While not cheap by any means, these P/E ratios are in-line with historical periods of low interest rates and low inflation.  Where we go from here depends on the near-term outlook for earnings, interest rates and inflation and the attractiveness of alternative investments (bonds, CDs, cash, etc.).  If inflation moderates, as the Fed predicts, if interest rates remain relatively low, and if the economy continues its recovery, there is no reason to believe investors will not continue paying current multiples for the world’s greatest companies.  If the Fed is wrong, we could see a temporary pullback in prices to allow earnings time to catch-up with valuations. 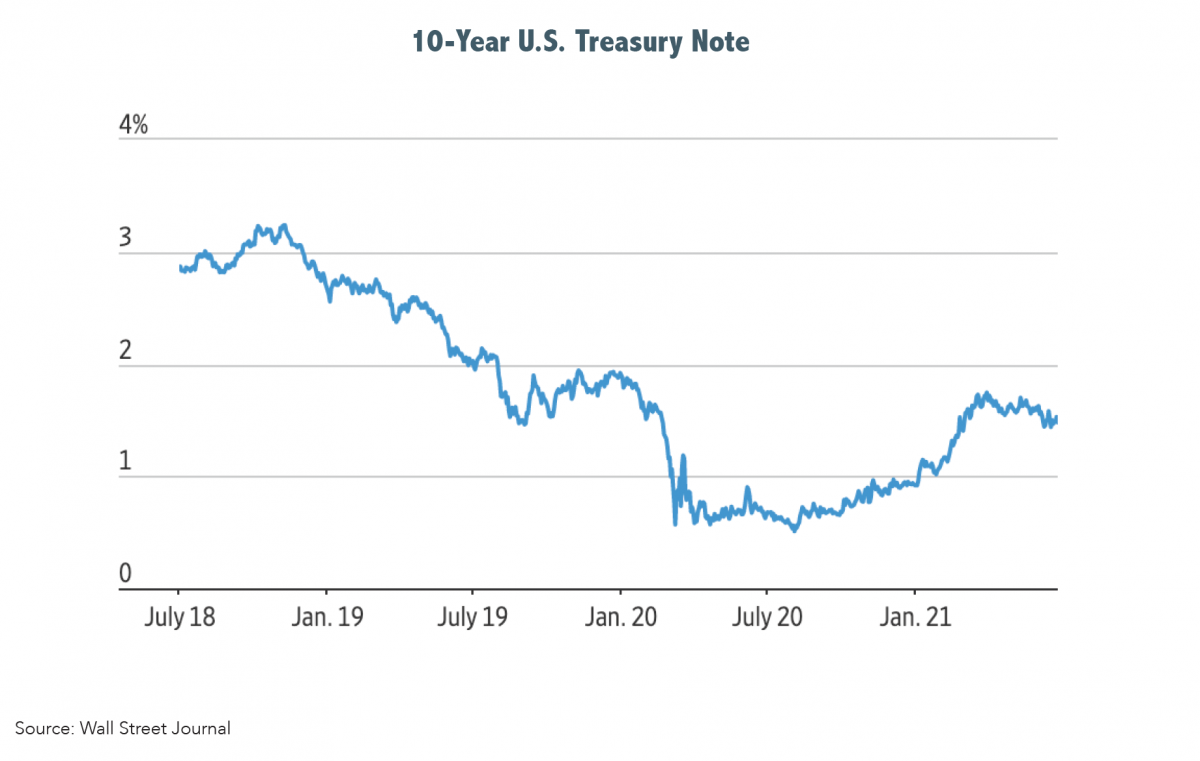 Will the market continue its upward momentum in this year’s second half, or will we see a sell-off?  Bulls are betting on continued accommodative policies, supportive interest rates and strong earnings growth as the economy fully re-awakens.  Bears argue that we have seen the peak in growth, peak in earnings and peak in Federal Reserve dovishness.  While that may be true, the Fed believes it has more work to do with so many people still unemployed and that a “transitory” bump in inflation must be tolerated to regain solid economic footing.  No one knows if the bulls or bears will be right over the near-term.  For the long-term investor it does not pay to bet against the resilience and creativity of the world’s greatest companies constantly expanding and evolving to provide the goods and services demanded by 7.8 billion consumers.  Your personal investment strategy should not wax and wane with the vagaries of the market, for there will always be vagaries.  Instead, it should be the product of an intelligent financial planning process that incorporates your unique goals, objectives, risk tolerance and the resources available to fund those goals.  No more, no less.