Just as everyone was settling in for a long winter’s nap, things started going haywire.  Stocks, oil and interest rates all rolled over beginning in late September/early October and dove deep as the 4th quarter progressed.  By the end of December, what was shaping up to be another good year for equities became a market only a Grinch could love.  Never mind that the latest quarterly reading on U.S. economic growth came in at a solid 3.4% annualized, after-inflation.  No matter that full-year 2018 earnings growth is expected to exceed 20%.  Forget that inflation is not soaring into the stratosphere as some anticipated, or that unemployment is at a 50-year low.  Don’t mention that global growth is expected to be around 3.7% this year.  The only thing that appears to matter is the perception that the world’s economies are slowing, that the U.S. and China cannot resolve their trade tariff tiff (try saying that three times quickly) and that the Federal Reserve’s Open Market Committee (FOMC) continues raising the fed funds rate, risking a recession in the minds of many people.  Sometimes perception creates reality. 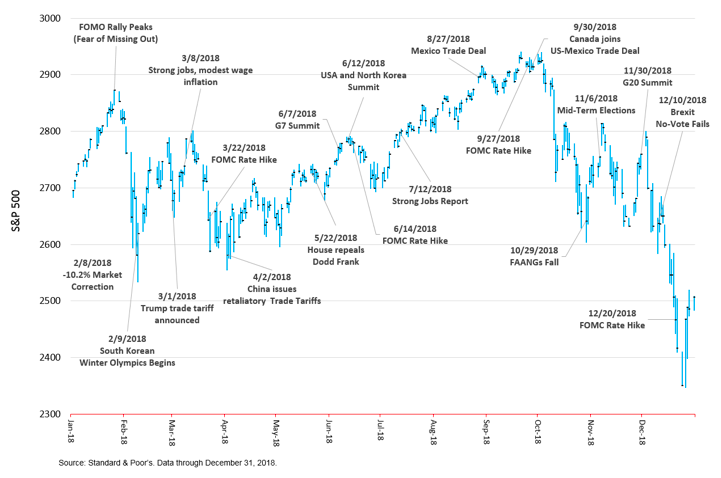 First, investors do not like uncertainty (as if there is ever a time without it) and the current environment is full of unknowns from the economic to the political.  Second, markets are forward-looking, moving in anticipation of the future rather than reacting to the past.  Currently the future looks to many like slower economic growth, reduced corporate earnings and political gridlock.

2018 started off with a bang, carrying through momentum from 2017 as tax cuts and reduced regulations led to increases in consumer spending, business investment and wages and ultimately to record earnings and dividends from the country’s largest companies (S&P 500).  The market overcame a 10% correction in February as well as concerns over rising interest rates, inflation and protectionist threats so that by the time the third quarter ended each of the major U.S. equity indexes had posted new all-time highs.  However, an inflection point came in late September as the Trump Administration’s tariffs on $200 billion worth of Chinese imports went into effect and a report was released by Bloomberg indicating that the White House was considering an executive order for trust officials to probe the business practices of social media companies.  Worries about increased regulation of those companies began to pressure their already lofty valuations.  Then Italy announced its budget deficit would equal 2.4% of its GDP in 2019 increasing concerns over EU solidarity and teeing up what would turn out to be an unpleasant holiday season in financial markets

The 4th quarter started on a high note with the announcement that the U.S. and Canada had reached a deal bringing Canada into the new United States-Mexico-Canada Trade Agreement (USMCA) that replaced NAFTA.  Buoyed by U.S. sanctions on Iran's energy industry and our booming economy, West Texas Intermediate (WTI) crude hit a four-year high of $75.96/barrel on October 3.  Interest rates were rising amid a confluence of factors that included stronger growth, rising inflation, deficit funding, shifts in monetary policy among the world's leading central banks, and the Federal Reserve's balance sheet normalization effort.  The jump in interest rates helped cool some of the stock market's bullish enthusiasm and trigger concerns about the future pace of economic growth. 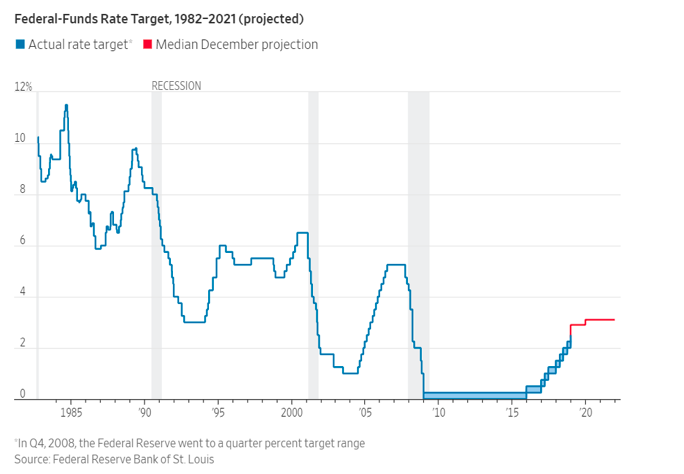 The FOMC hiked the fed funds rate four times in 2018 (+1.00% to a range of 2.25% - 2.50%) with a total of nine hikes since the process toward normalization began in December 2015.  In its September meeting it removed the word “accommodative” from its policy statement, which led some to believe that the central bank could be moving towards slowing monetary tightening.  However, Fed Chairman Jerome Powell followed up by saying the language change didn't signal a change in the Fed's path for rate hikes.  President Trump tweeted that he'd prefer the Fed not raise interest rates and New York Fed President Williams (an FOMC voter) said that he thinks the Fed will get to a neutral rate in the next year or so, implying that there is still more room for rate hikes.  The IMF (International Monetary Fund) subsequently lowered its global growth outlook for 2018 and 2019 from 3.9% to 3.7%, citing in part the retardant of trade actions and trade uncertainty.  Conflicting tensions between expected economic slowdowns during periods of monetary tightening added to the market’s volatility. 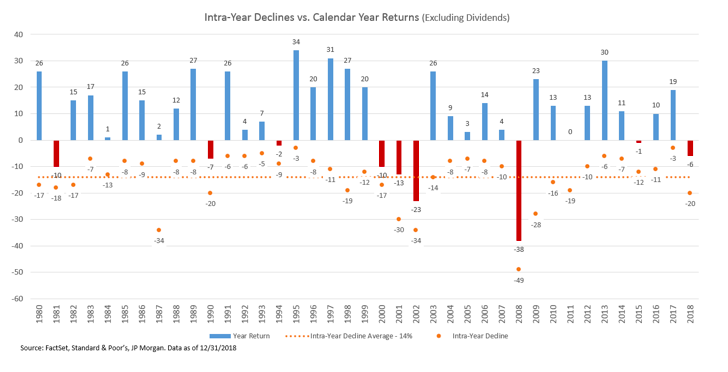 By mid-October stocks had broken below their 50-day moving average and then dropped below their 200-day moving average and it became obvious the market was worried about a potential earnings slowdown, rising interest rates, trade tariffs and rising costs.  Once the NASDAQ index fell 10% a buy-on-the-dip mentality gave way to a risk-off posture and market-based interest rates reversed direction.  Additional downward pressure came when some of the largest companies such as Apple, Google and Amazon started reporting news of softening demand, product glitches and/or regulatory concerns.  November was dominated by concerns over the mid-term elections and the next FOMC decision and policy directive. The elections produced a divided Congress and removed an element of uncertainty which had added to market volatility.   The FOMC decided to hold off on raising rates which was largely expected, and the month closed out with de-risking of the FAANG stocks which continued to sell-off due to concerns over a cyclical slowdown, valuations and regulatory scrutiny.  By December the focus turned to the G-20 meeting with its announced 90-day delay in the increase in tariffs between the U.S. and China, Brexit, confusing reports of an inverted yield curve and worries of a recession.  The market simply wanted to go lower and embraced negative news while discounting any good news such as record 3Q earnings, solid GDP growth and low inflation.

Stocks continued a dramatic sell-off on Christmas Eve, a shortened trading day, after President Trump once again criticized the Federal Reserve for raising interest rates and threatened to fire Chairman Jerome Powell.  Just the day prior, on Sunday, U.S. Treasury Secretary Mnuchin announced to the world that he had called the nation’s six largest banks to ensure their liquidity levels were adequate (which they are).  His announcement, intended to bolster investor confidence, had the opposite effect and unnerved an already jittery market.  Add to that a partial government shutdown over the border wall funding dispute and it meant coal in our stockings for Christmas.

No sooner were those sooty stockings taken down from the chimney, the markets rallied recouping the Christmas Eve decline with the largest-ever single day point gain in the Dow Jones Industrial Average, up 1,086 points or almost 5%.  The broader market also rallied 5%, its largest daily percentage gain in almost ten years.  It can make one dizzy.  Of course, that 5% gain was not near enough to make up the ground lost since the September peak.   By year-end all major U.S. and international markets saw red for 2018, ranging from -4.38% (S&P 500) to -14.58% (International Emerging Markets).  The 4th quarter produced losses of -7.47% (International Emerging Markets) to -20.10% (S&P 600 Small Cap Index).  Oil prices (WTI) plummeted 40% from their October high, closing out at $45.41/bbl. due to concerns of over-supply and a global economic slowdown.  The energy sector pulled down by oil prices, was 2018’s worst performing sector, down 20.5% (Yardeni Research).  Our bond benchmark (Barclays 1-5 Year Govt/Corp Index) gained 1.38% for the year and 1.46% for 4Q18 as the flight to quality caused bond prices to rally. 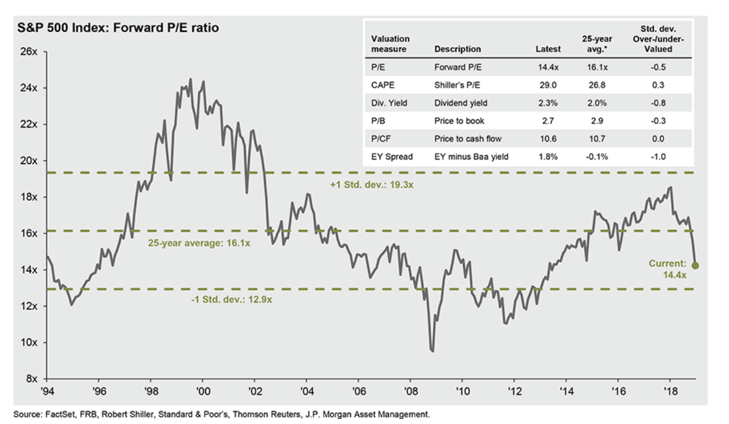 At year-end’s closing price of 2,506, the S&P 500 certainly looks more attractive than its September peak of 2,940.  However, the question becomes what multiple of earnings investors will assign to these great companies given the expected slowdown in growth.   The current 2019 earnings estimate of $176.25 for the S&P 500 equates to a 12-month forward P/E (Price/Earnings) multiple of 14.2x as compared to a forward P/E of 18.3x entering 2018 (Yardeni Research, Inc. and Thomson Reuters I/B/E/S). With a P/E of 14.2x, a current dividend yield of 2.18% and an estimated earnings yield of 7.03% (EPS/Price) investors can draw their own conclusions as to whether the market looks pricy, cheap or reasonably valued – it’s all in the eye of the beholder.

2018 will soon be a distant memory (especially for those of us more mature investors for whom time seems to pass more quickly) and a recent survey of 19 Wall Street banks predicts an average 25% gain in the S&P 500 index in the new year (USA Today).  Earnings are predicted to grow about 8% in 2019, nowhere close to the 20% growth in 2018, but respectable in any other year and certainly not recessionary.  Lower earnings growth is expected due to the fading impact from tax cuts, higher borrowing costs and slower economic growth at home and abroad.  With the pervasiveness of computerized algorithms and program-trading, increased volatility is the new norm and will be something investors will simply have to tolerate as a part of equity investing.

Is an economic slowdown a foreboding of an eminent recession or just a normal cyclical episode?  No one knows for certain but the economic metrics we follow do not portend a recession just yet.  The yield curve is flat, but not inverted.  Interest rates are higher today than a year ago, increasing the cost of everything from credit cards, home equity loans, consumer loans to longer-term home mortgages.   If the fed continues to raise rates it remains to be seen if market rates will follow or if they will do what they have been doing recently – fall.  Economic growth, as measured by GDP is expected to be 2.6% (net of inflation) in 2019 according to a survey of 51 economists (Wolters Kluwer Blue Chip Economic Indicators), and while less than the 3% rate expected for all of 2018, 2.6% is very good growth in a $20 trillion economy.  If we are still growing past July 2019 the current economic expansion will become the longest in U.S. history.

Consumer confidence has taken a hit along with 401(k) accounts, but there are several positive take-aways from the current environment.  Lower oil prices act like a tax cut and can help stimulate consumer spending because it reduces the cost of gasoline and hundreds of other petroleum-based products.  The Conference Board Leading Economic Indicators Index® (LEI) is at record levels and rolled over well in advance of the last two recessions.  Retail sales are booming and the crucial holiday season (November 1 – December 24) just posted their largest gain in six years, + 5.1%.  Some borrowing costs are lower today than they were 3 months ago as interest rates reversed their upward trajectory.  Job growth should slow in 2019 as employers find it harder to find qualified workers but the unemployment rate is expected to drop from today’s 3.7% to 3.3% by the end of 2019 as the pool of surplus workers thins out (JP Morgan Chase/USA Today).  Fortunately, enhanced productivity enables employers to raise wages to attract and retain talent without crushing their bottom lines or requiring significant price increases, thus one reason for continued moderate levels of inflation. 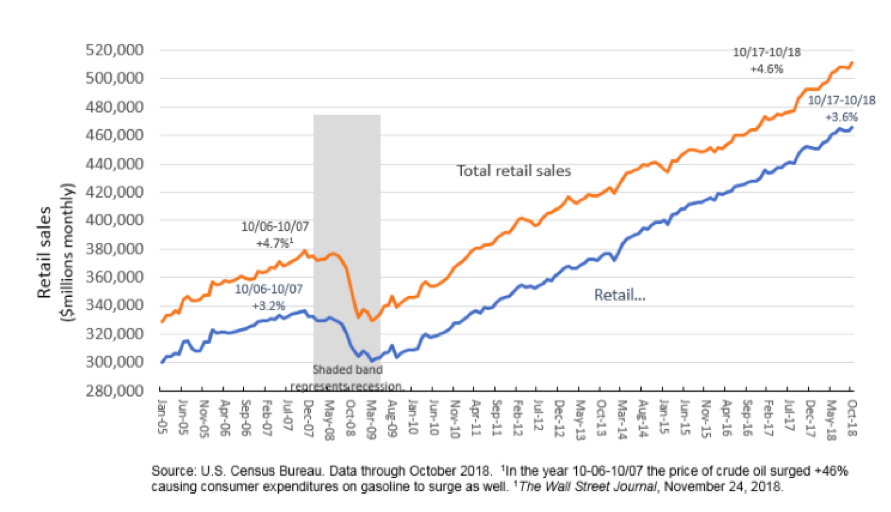 Daily tweets notwithstanding, the President cannot remove the Chairman of the Federal Reserve.  China and the U.S. will eventually resolve their trade dispute, if for no other reason than China has too much to lose to take a hardline position.  The government’s shutdown over border wall funding, while unpleasant, is not unprecedented despite what the hyper-sensational news media would have you believe.  No matter.  The crazier financial markets become, the stronger our resolve at Wealthview Capital to succeed in our mission – that being our clients’ mission.  Simply stated - their life’s goals and objectives.  For us, this is not a game of playing the market but instead, creating intelligent goals-based financial plans and then structuring low-cost, broadly-diversified, tax-efficient portfolios intended to help fund those goals over time and being there all along the way to offer personalized advice and mutual accountability.  What an honor and a privilege to be able to play a part in something so meaningful.

Best wishes for a safe, prosperous and blessed 2019.