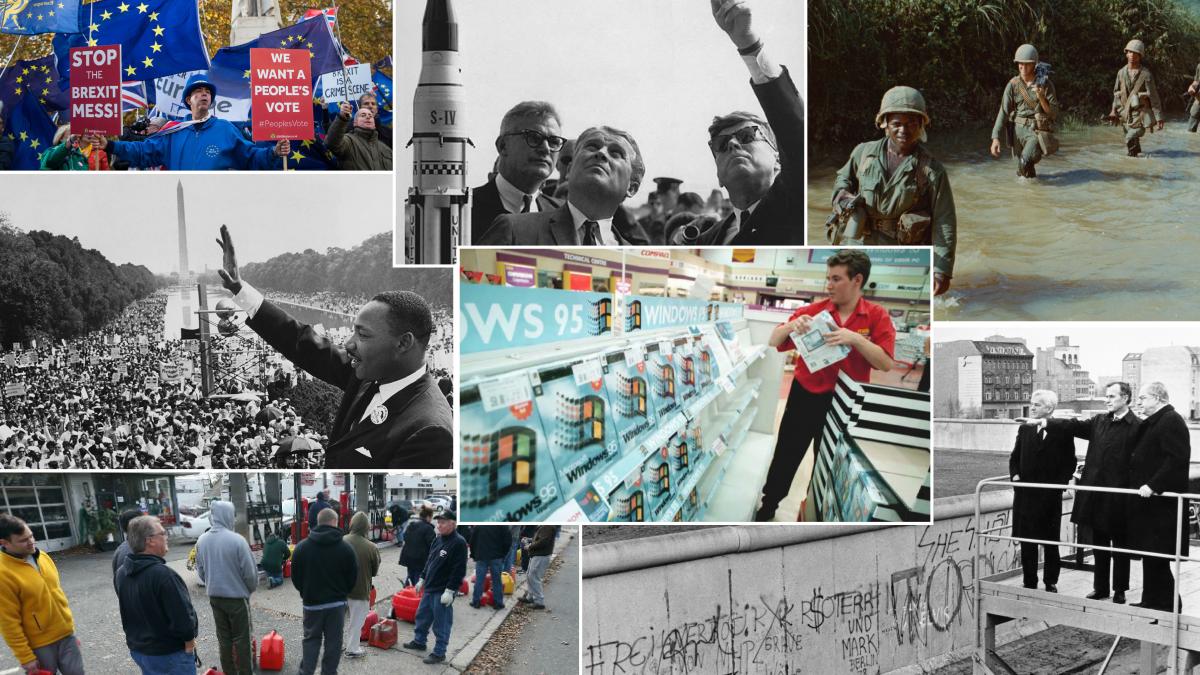 When discussing money and saving, the topic of compounding comes up often – as it should – because of its importance. But what is compounding? When related to savings or investing, compounding is essentially money building upon money, or earnings that generate more earnings. And while most people inherently understand compounding is a good attribute of investing, I wonder if they truly understand just how wonderful it is? Compounding enables money that you have worked hard for to one day work hard for you. Given time, the stock market can be a powerful compounding machine, especially when investments are left uninterrupted. Whether it be wars, taxes, presidential elections, politics, inflation, government deficits, crises – whatever the headline du jour –throughout each decade every investor can find a reason to avoid investing. But that doesn't mean one should.

To demonstrate how powerful a compounding machine the stock market can be let us take a trip through time tracing a $100 investment in the S&P 500 beginning in 1950, looking at the return of the decade and the many reasons an investor might have given at the time for avoiding investing.

Five years removed from the end of World War II, the S&P 500 begins the decade with a price of $16.66. What a decade of investing it turned out to be! From January 1, 1950, and holding through the entire decade, our $100 investment will grow into $558.22, for an annualized return of 18.76%. But what did our investment experience during this decade?

It experienced North Korea invading South Korea and saw the Russians place nuclear missiles on submarines and a rise in fear within the United States of the State Department being infiltrated by communists. It witnessed Dwight D. Eisenhower elected as president of the United States (becoming the first Republican to take the office since 1933) and saw the start of desegregation when the Brown v. Board of Education decision is handed down by the Supreme Court. It kept growing as the American Civil rights movement, led by Martin Luther King, Jr. was set into motion after Rosa Parks was arrested for refusing to give up her seat on a bus. As the decade ended, the investment experienced the Soviet Union’s launch of Sputnik and Castro taking power in Cuba.

After a stellar decade of investing, the 60s would prove to be more challenging, though rewarding for the resilient investor. Our investment value of $558.22 in 1960 will be worth $1,190.73 by the end of the decade for a nominal annualized return of 7.87%. So what did our investment experience during the swinging 60s?

At the beginning of the decade, it experienced a tight Presidential election won by John F. Kennedy. It saw the Bay of Pigs – failed attempt by the United States to overthrow Castro’s government in Cuba – shortly followed by the construction of the Berlin Wall. It witnessed the beginning and end of the Cuban Missile Crisis. It witnessed Martin Luther King’s famous “I Have a Dream” speech delivered in Washington, John F. Kennedy’s assassination, the escalation of the Vietnam war, the passing of the U.S. Civil Rights Act, and President Johnson’s creation of Medicare. It ended the decade with the assassination of Martin Luther King, Jr in Memphis.

The 1970s was an eventful decade and would prove a difficult one for stocks and bonds. Though the decade would provide a positive nominal return before inflation, the skyrocketing double-digit inflation of the decade would consume most of the returns. By the end of the decade, our original investment value of $1,190.73 would grow to $2,183.25 for an annualized return of 6.25%. So what happened in the 1970s that may have kept some from the market?

The Pentagon papers were published by the New York Times, exposing the Watergate scandal which led to the resignation of President Richard Nixon. The Vietnam war broadened with an invasion of Cambodia, followed by anti-war militants attempting to shut down the government and the energy crises created by the Arab Oil Embargo brought skyrocketing costs to consumers, challenging the stability of national economies throughout the decade. This same oil crisis led to a recession in the United States accompanied by stagflation, a condition of high unemployment accompanied by high inflation.

It experienced continued rampant inflation through the first half of the decade. It saw the Soviets invade Afghanistan leading to the United States imposing grain embargos on the U.S.S.R., followed by the U.S. breaking diplomatic ties with Iran due to the Iranian hostage crises, and Iraq invading Iran. All of this was amid continued increasing consumer costs, rising interest rates, and a recession in the United States. It witnessed the election of Ronald Reagan and the subsequent assassination attempt on his life as well as the largest tax cut in history (at the time) as proposed by President Reagan and passed by Congress. It experienced an unemployment rate of 10.4%, which left over 11 million Americans unemployed, and Fed Chairman Paul Volcker’s ongoing fight against rising rates and inflation. The Savings and Loan industry began to fail after years of risky lending in search of high returns, which ultimately led to the failure of nearly a third of the industry – a $160 billion cost to taxpayers. To close out the decade, it experienced Black Monday, when the stock market dropped 22.6% in one day wreaking havoc in markets across the globe.

Considered to be a decade of prosperity and relative peace, the 90s may have been the calmest decade during which to invest. With the rise of the Internet and the fall of the Soviet Union, prosperity in the U.S. grew. By the end of the decade our investment value of $10,167.31, will be valued at $54,306.31 for an annualized return of 18.24%. So what did our investment experience in the 90s?

The beginning of the decade brought another war, the Gulf War, lasting 42 days. It also saw the first bombing of the World Trade Center by Islamic terrorists. It experienced an emergency $20 billion loan from the U.S. to Mexico to avert a major financial disaster due to currency exchange rates. It experienced "irrational exuberance," a phrase coined by Fed Chairman Alan Greenspan, due to the ever-increasing prices of stocks. It witnessed the beginning of the end of the highly leveraged Long Term Capital Management (LTCM) group with the start of the Asian Financial Crisis; the final nail came from the Russian financial crisis and Russian government defaulting on its national debt. The fall of LTCM would threaten the whole financial system due to its massive leverage position and its overall reach on Wall Street. This would lead the Federal Reserve to step in by organizing a $3.6 billion bailout to avert a collapse in the financial markets. By the end of the decade, President Bill Clinton was undergoing impeachment trials, ultimately to be acquitted by the U.S. Senate.

Known as the “Lost Decade”, the first decade after the turn of the century would prove a difficult one, with the S&P 500 ending lower than where it started. Starting the decade with an investment value of $54,306.31, our investment will end the decade valued at $51,237.49 for an annualized return of -.58%. What all did our investment face during this decade?

To start, it experienced the bursting of the Dotcom bubble, a bubble caused by excessive speculation in Internet companies in the late 90s that came to an end in the early 2000s. It also witnessed the tragic September 11 terrorist attacks on the World Trade Center which shut down the New York Stock Exchange for 7 days and lead to the ongoing War on Terror. It saw massive corporate scandals and the fall of Enron, WorldCom, and Tyco, all of which would test the securities markets and investors’ confidence, leading to a stock market crash in 2002. It also experienced the devastating impact of one of the United States' largest natural disasters, Hurricane Katrina, displacing many and impacting oil and gasoline availability and prices. To round out the decade, our investment experienced a global recession caused by the subprime mortgage crisis which brought Wall Street to its knees and left many without homes and millions more unemployed.

After a difficult decade to start the new century, the 2010s would be born out of a recession and bring with it a decade of steady gains accompanied by low volatility and minimum setbacks. Our starting investment value of $51,237.49 will end the decade valued at $182,261.19 for an annualized return of 13.53%. So what did our investment experience during this decade?

To start, it experienced the Federal Reserve announcing a second round of Quantitative Easing to spur growth in the U.S. as the economy remained on uneasy ground coming out of the recession. It witnessed the passing of the Affordable Care Act and concerns of the European Union beginning to unravel as member countries such as Greece, Portugal, Spain, and others faced a debt crisis, needing to be bailed out or default on their national debt. It experienced extreme volatility in oil prices, with peak prices in 2014 around $110 which fell by close to 70% over the next few years, all creating instability in countries reliant on oil production. It ended the decade with Brexit – the U.K. voting to leave the European Union – causing disruption to the European banking system as well as Donald Trump being elected President of the United States and quickly waging trade wars on China and other countries with tariffs.

And now to the current decade. A few months into the new year, a global pandemic arises that will disrupt economies across the world, leaving 23 million people in the U.S. without work, the loss of millions of loved ones, a stock market crash, and governments taking unprecedented actions to keep their economy moving as best possible. Also to start off the decade, the U.S. faced riots, political movements, as well as worries of inflation due to unprecedented stimulus packages from our government and supply chain concerns. So where do we go from here? Only time will tell, but I remain optimistic of a bright future.

Compounding is not done in a straight line, the market zigs and zags. It requires patience and enduring difficult periods of not only market turbulence, but life events as well. It is easy to look at history and believe we would have held strong through difficult periods but reading about it and living through it are quite different. Imagine coming home to your family after losing your job during a recession with your investment portfolios falling, worrying about providing a secure future for them while the world appears to be in disarray and worsening. These are the moments where financial decisions are made that can alter the course of your financial future. These are the times when it is best to have someone to talk with, to guide you to the other side, a partner with experience and objectivity to help weather the storm. As history has shown repeatedly, human innovation always trumps fear, entrepreneurs create, companies expand, and the market presses on, no matter the circumstances. As the great investor Warren Buffet once said, “Never bet against America”.

As demonstrated through the last 70 years of investing, a $100 initial investment in the S&P 500 in 1950 would have grown to $182,261.19 by the start of 2020, achieving a nominal annualized return of 11.32%. The saying goes that history does not repeat, but it does rhyme. New challenges will emerge, many like the past. Regardless, be in the market and stay in the market. Uninterrupted compounding can be a powerful tool in an investor's belt.