If 2020 were a sporting event, investors might have been tempted to head for the exits after the first quarter when the market buckled under the weight of the novel coronavirus COVID-19.  But, as the old saying goes, it ain’t over until it’s over.  In one of the most remarkable come backs ever, team equity reversed momentum on March 24th and, by November 24th, scored record highs from the S&P 500, the Nasdaq Composite, and the Dow Jones Industrial Average which closed above 30,000 for the first time.  It was a bittersweet juxtaposition of investor relief with tragedy as stocks hit new highs concurrent with record daily COVID-19 infections.  In a year like no other, we experienced the first pandemic in over 100 years, a global economic shutdown, Depression-era unemployment, a deep but brief recession, the fastest-ever 35% stock market sell-off, all-time low interest rates, civil unrest on a scale not seen in decades, and a contentious presidential election which left the nation bitterly divided.  However, it will be COVID-19, its human devastation, and the economic destruction from efforts to contain and defeat it for which 2020 will be most remembered. 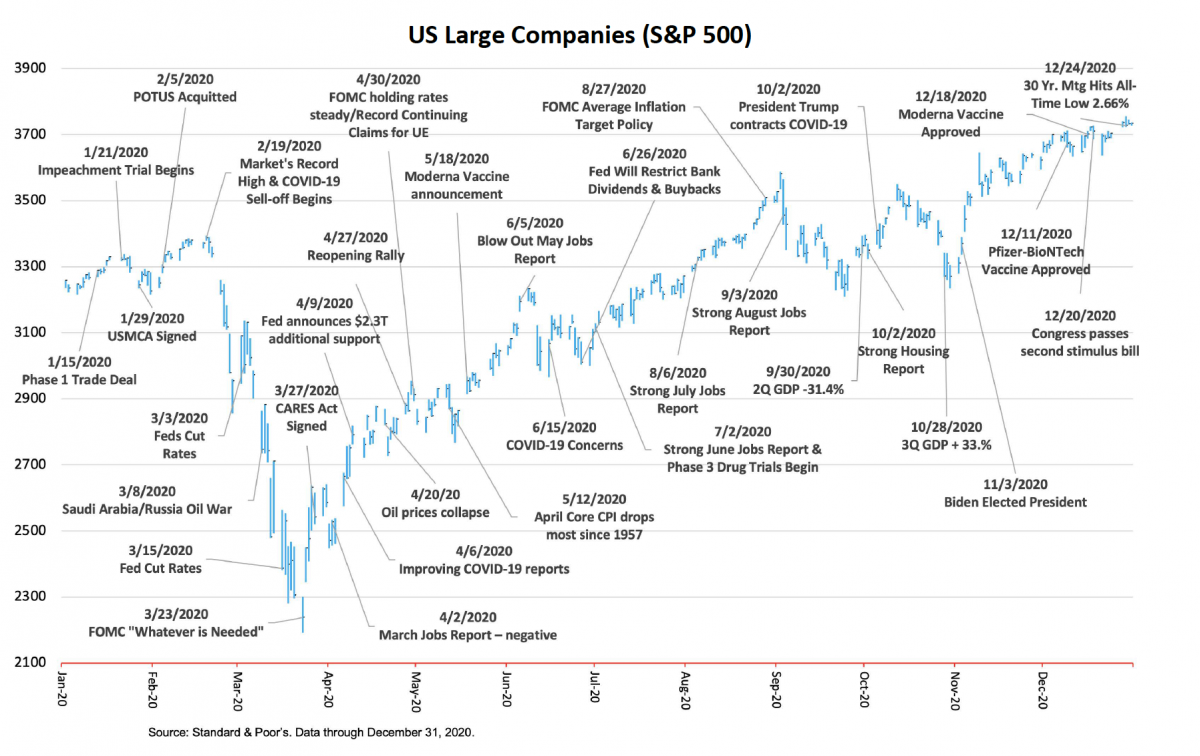 Throughout the year the federal government rolled out initiatives reminiscent of the 1930s to keep the country from total collapse during the pandemic fight.  CARES Acts I & II pumped trillions of dollars into the economy, and the Federal Reserve lowered interest rates, offered loans, and purchased bonds providing much needed liquidity.  Despite the enormous human and economic toll resulting from the pandemic, there were many positives.  The year revealed unselfish giving and compassion by people making masks, donating food, and volunteering to be injected with experimental vaccines.  Doctors, nurses, and other healthcare professionals risked, and sometimes gave their lives caring for the ill.  Distilleries started making hand sanitizer instead of liquor.  The big-three auto makers halted production of their own products to manufacture ventilators.  The U.S. Navy deployed Mercy-class hospital ships to NYC and LA and Samaritan’s Purse opened a field hospital in Central Park.  Operation Warp Speed’s public-private partnerships fast-tracked the development, manufacture and distribution of COVID-19 therapeutics, vaccines, and diagnostics in mere months rather than the years normally required.  People everywhere donned masks, socially distanced, and waited for mass immunization.

Faint of heart investors did not sleep well in 2020, a year that started out strong and finished stronger, but with unprecedented volatility in between.  For example, the S&P 500 (large U.S. companies) was up +5% through February before falling -35% and yet ended the year with a stellar total return of +18.4%.  Smaller companies (S&P 600), which had taken the brunt of the sell-off, down -42% at ebb tide, returned +11.3% for 2020.  International developed markets (MSCI EAFE) gained +7.8% for the full-year and international emerging markets (MSCI EM) were up +18.3% by year-end.  For the fourth quarter, stocks delivered super-sized, double-digit returns led by those formerly beaten down U.S. small-cap companies (S&P 600) + 31.6%.  Our safe-haven proxy, short-term, investment-grade corporate bonds (Bloomberg Barclays 1-5 Year Credit) produced a total return of +5.2% for 2020.  Investors holding cash or cash equivalents (money market funds, short-term CDs, savings accounts, etc.) obtained returns close to zero.  After accounting for taxes and/or inflation, cash’s “real-returns” were negative.

The U.S. economy took a battering of Depression-era proportions in 2020 as the world essentially shut down trying to bend the COVID curve.  Second quarter U.S. GDP (Gross Domestic Product) fell -31.4% annualized, the worst quarterly drop in history.  Our unemployment rate hit 14.7% in April, compared to a low of just 3.5% in February.  In response to the economic carnage, the Federal Reserve cut the fed funds rate in February and then again in March to a range of 0.00% - 0.25% and instituted other measures including increasing its purchases of Treasury securities and agency mortgage-backed securities (MBS).  However, on March 23rd the Fed said it was lifting the cap on its QE (Quantitative Easing) program and made the stunning announcement that it would do “whatever is necessary” to support financial markets including buying commercial MBS, municipal debt, and investment-grade corporate bonds. That day marked the bottom of the sell-off.  The Fed’s actions were followed by Congress’s approval of the $2.3 trillion CARES ACT in April and a second $900 billion stimulus package in late December.  In between those Congressional bailouts, the Fed announced a massive $2.3 trillion in loan programs to help support businesses and state and local governments.  As bad as the economic news was, investors saw these programs as green lights to buy, buy, buy! 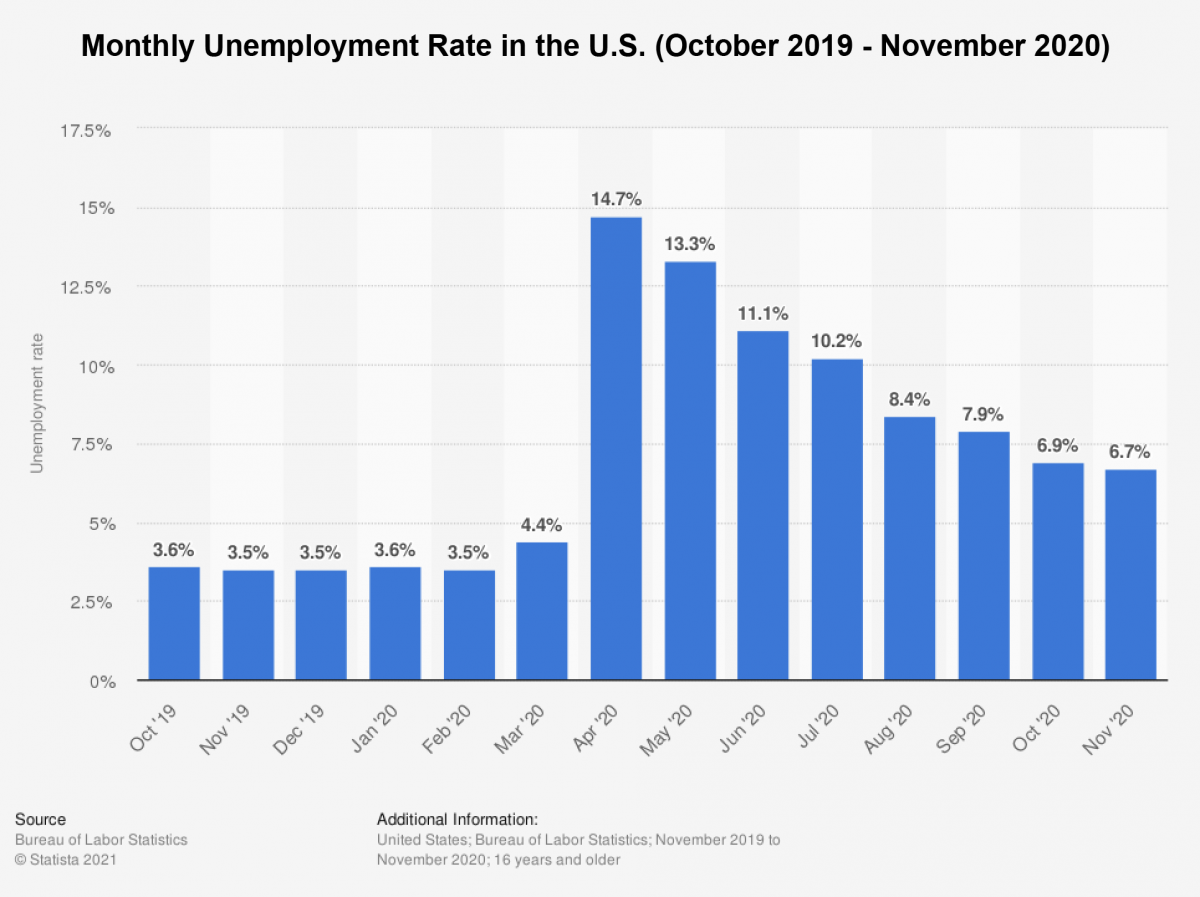 The economy bounced-back in the third quarter as businesses began re-opening with relaxed restrictions from state and local governments and aided by the afore-mentioned stimulus efforts. Consumers, desperate to get out and spend some of their stimulus money, did their part. The result was a drop in the unemployment rate to a COVID-era low of 6.7%, still far above the 3.5% rate in February, but a long way from April’s 14.7% rate.  Record-low mortgage rates spurred a boom in home buying and re-financing activity put more discretionary income into the hands of consumers.  The reopening resulted in a +33.4% annualized gain in third quarter GDP, the largest increase on record.

The fourth quarter was characterized by a shift in investor sentiment in October away from large-cap stocks to mid, small, and cyclical companies as well as banks due to the steepening of the yield curve.  November brought Pfizer and Moderna’s announcements of their vaccines’ 90%-95% efficacy, and it also brought the November elections which many hoped would result in a divided government, reducing the likelihood of increased taxes and spending.  In December, the FDA approved the Pfizer-BioNTech and Moderna vaccines for emergency use.  Additionally, Congress passed the long-awaited second stimulus package. Unfortunately, the final quarter will also be known for horrendous COVID-19 numbers as reopening of the economy paired with holiday travel and social gatherings produced another wave with new cases exceeding 100,000 per day since November 4th.  By year-end total U.S. infections and deaths stood at approximately 20 million and 340,000, respectively. 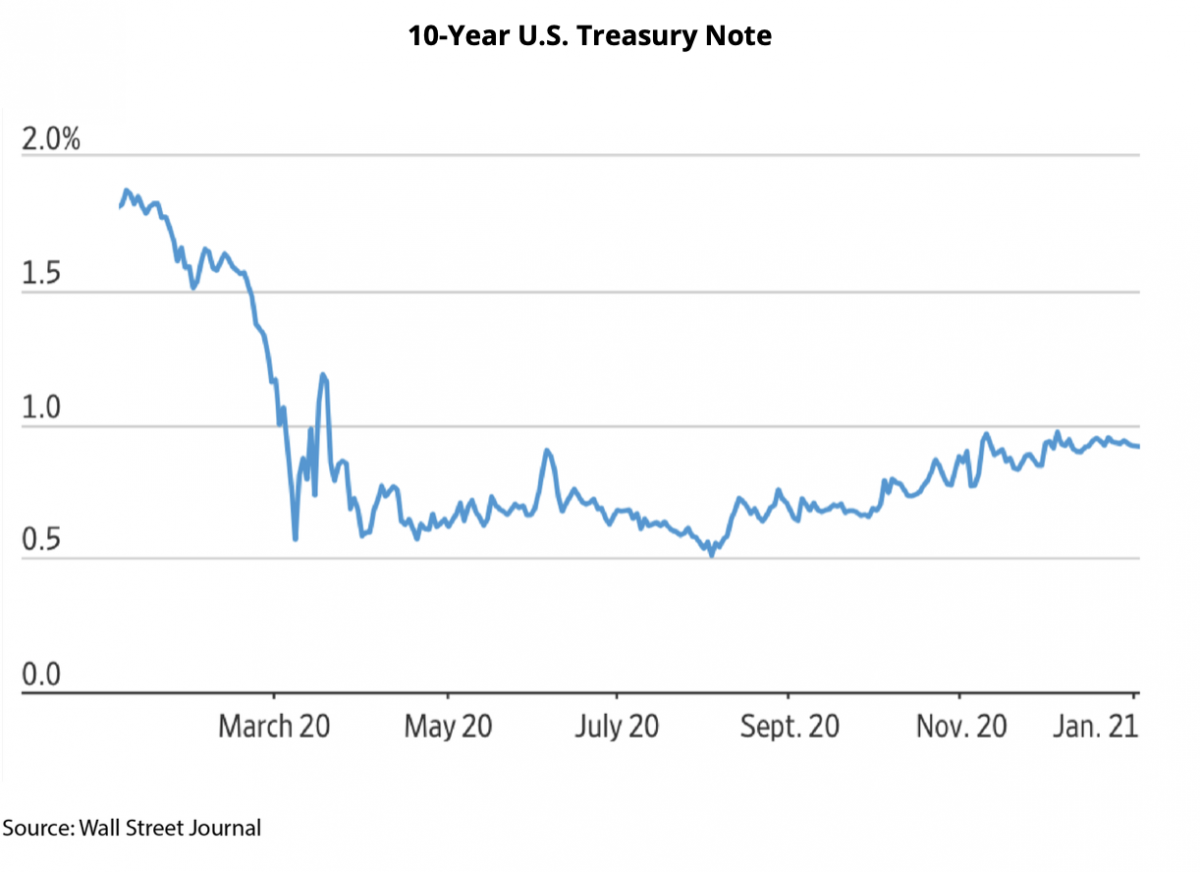 How can 2020’s robust equity returns be explained in light of the massive economic and human losses that took place and are still ongoing?  There are several explanations.  First, because interest rates had been driven so low by the Fed, fixed-income investments lost a lot of their luster, making equities appear to be a more reasonable alternative.  Second, the psychological pressure of FOMO (fear of missing out) pressured many investors to buy, worried they would be left behind if they waited much longer.  Finally, and potentially most influential, is what is known as the “Fed put”.  This is a theory that the Federal Reserve has essentially put a floor under the market with its stated position to hold interest rates low for the foreseeable future.  In 2020 the Fed also revised its policy in regard to inflation.  Previously, it had a dual mandate of maximum employment and stable prices.  The Fed now says it will allow inflation to exceed 2% until it averages 2% before raising interest rates which may take a while.

As investors look beyond the pandemic to a post-COVID world, for many, their disappointment and fear is replaced with hope and confidence.  Even though 2020 produced negative earnings growth, many investors are looking forward to 2021 and even farther out as the eventual earnings recovery is manifested.  A popular measure of equity value, the P/E Ratio (Price/Earnings) shows the S&P 500 trading at 23.3x expected 2021 earnings, a 40% premium to its 10-year historical average. Of course, P/E ratios cannot be viewed in a vacuum, but in the context of other factors like interest rates and inflation.  With low interest rates, low inflation, and a consensus opinion that both will remain muted for an extended duration, a higher P/E may be justified.

What a difference a year makes.  In late 2019 Federal Reserve Chairman Jerome Powell announced that the economy was in a very good place and should continue growing at a solid pace with no recession in sight.  Yet, within a few months we suffered the worst recession since the Great Depression caused by an invisible, previously unknown enemy.  It is usually something unpredictable that upends the status quo, demonstrating the futility of basing investment strategies on short-term economic or market predictions.  The market’s incredible and rapid recovery also exposes the risk of market-timing.  Anyone who sold during the decline very likely had seller’s remorse by year-end.  Portfolio construction and management should be the result of a sound investment philosophy, guided by an intelligent financial plan and with a purpose to help fund the goals and objectives contained within that plan – no more, no less.  Investment strategies should not be dependent upon anyone’s predictions, not even the Chairman of the Federal Reserve's.  After all, what a difference a year can make!

Best wishes for a safe and prosperous 2021.