The perennial tug-of-war between bulls and bears took a different turn during 1Q-22 when war broke out in eastern Europe in late February.  Vladimir Putin decided Russia wasn’t large enough and invaded Ukraine, but instead of capitulating, brave Ukrainians dug in to resist Putin’s hostile intentions.  Suddenly, recent concerns over inflation, interest rates and COVID-19 expanded to include a more ominous geo-political risk.  Uncertainty grew, volatility increased, and investor sentiment waxed and waned throughout the quarter. 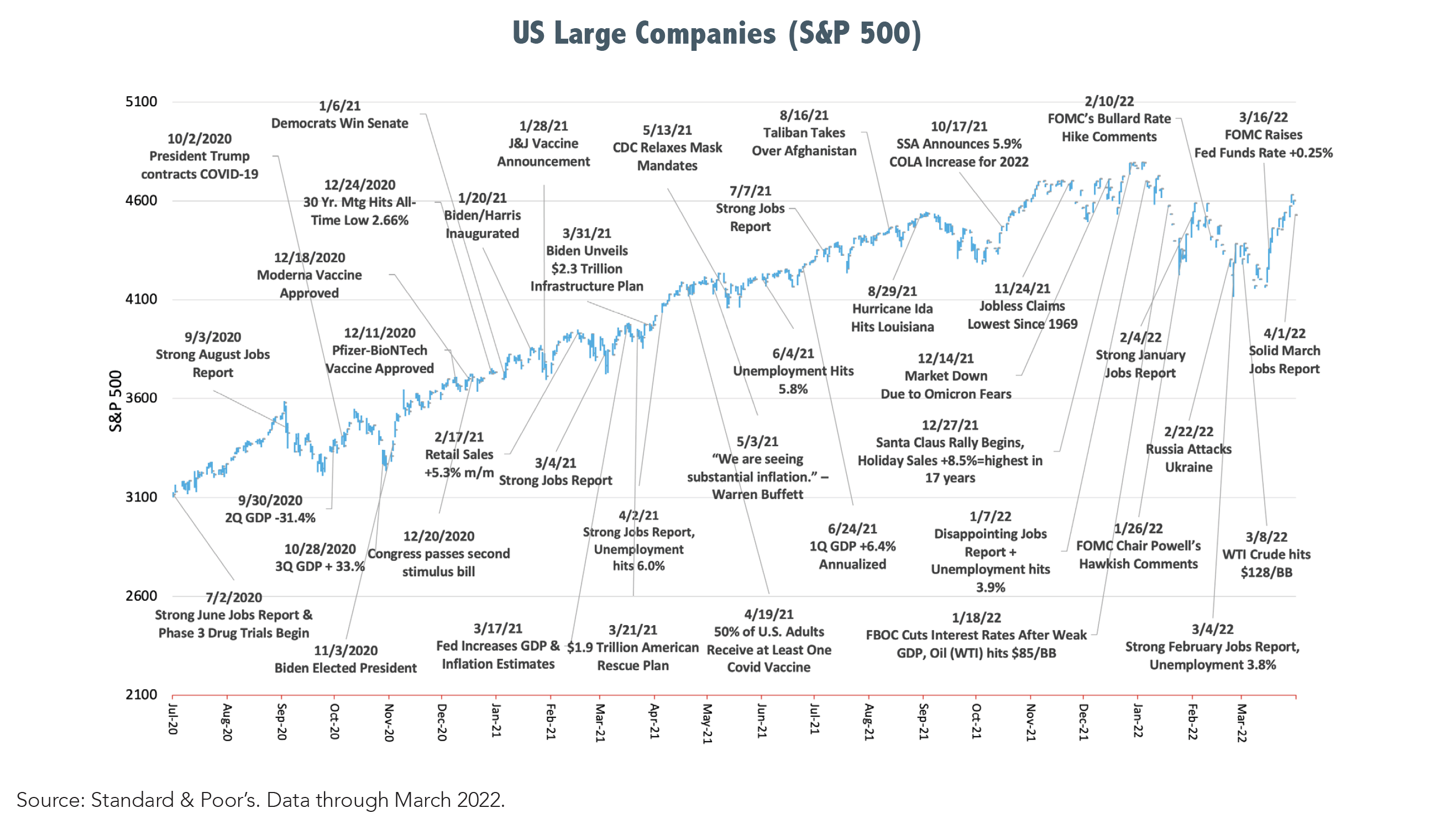 Notwithstanding the conflict in Ukraine, the U.S. economy continued growing in the first quarter and remains remarkably healthy.  While down from 2021’s blistering pace, real GDP (Gross Domestic Product) grew by an estimated 1.9% annualized in 1Q-22 with current estimates for the full-year ranging from 2.5% - 3.5% after inflation, above the long-term trend rate of 2.2% growth.  The unemployment rate fell to 3.6% in March as employers added 431,000 new jobs, averaging 562,000 per month in the first quarter.  At this pace we will recover all the jobs lost from the pandemic by summer and yet there remains 11.3 million jobs available which indicates a continued hot labor market.  Wages grew 5.6% year over year, which is above pre-pandemic levels. Unfortunately, the cost of living is increasing faster than those wage gains, putting pressure on many consumers’ pocketbooks.

Both equity and fixed-income markets pulled back during the first quarter for related and unrelated reasons. Stocks vacillated in a vortex of counter-vailing forces with increasing earnings, economic growth and tons of cash providing upward support for share prices, countered by rising interest rates, inflation and the added geo-political risks from the Russia/Ukraine situation creating downward pressure. Equities made an impressive upward run toward quarter’s end, but it wasn’t enough to overcome earlier losses, and all major equity markets lost ground during 1Q-22. At current valuations the S&P 500 is trading at a P/E (price to earnings) multiple of 20 times 2022 estimated earnings, which is below recent highs but above long-term averages.  International companies, while more volatile, are trading at lower valuations.

Bond returns fell over the course of the first quarter and the past 12 months as interest rates moved up significantly, primarily due to inflation running at 40-year highs. Interest rates and bond prices move in opposite directions, so if rates rise, prices fall to offset the difference in yields. The most dramatic moves have been on the short end of the yield curve. Over the past year, the 2-year U.S. Treasury note has risen from 0.19% to 2.46% while the 10-year has lifted from 1.72% to 2.38% currently.  As a result, the yield curve (illustrated above) flattened with short-term rates now close to, or even slightly above longer-term rates. Some economists believe an inverted yield curve portends a recession. That has happened in the past, but not always, and the trillions of CARES Act dollars parked in checking, savings and money market accounts of consumers, businesses and state and local governments argues for continued economic growth.

Can stocks make headway in an environment of rising interest rates? The answer is a resounding yes, as history has proven time and time again. Rising interest rates typically accompany a strong or recovering economy which is good for companies and shareholders alike. But what about an inflationary environment? Yes, again. Equity ownership has proven to be an effective long-term inflation hedge, with returns averaging a 4.9% annual premium over inflation. Since companies are the entities raising prices of goods and services, it is intuitive that the owners of those companies will benefit over time.

The Federal Reserve finds itself between a rock and a hard place in trying to fulfill its dual mandate of full employment and stable prices along with moderate long-term interest rates.  It simply waited too long to adjust its overly accommodative monetary policies in response to the pandemic and the trillions in dollars rained down on consumers, businesses and state and local governments. Inflation, at a 40-year high does not yet appear to be transitory and the Fed is now in the process of reversing three policy levers trying to reign it in without tilting the economy into a recession. The first lever was to phase out its $120 billion monthly purchases of U.S. Treasury notes and mortgaged-backed securities. Next, it initiated the beginning of an unknown number of increases in the fed funds rate with a 0.25% rate hike on March 16th.  Estimates are it will raise that rate another 5-7 times this year.  At some point soon, the Fed may flip a third lever and start selling bonds to reduce its $9 trillion balance sheet. 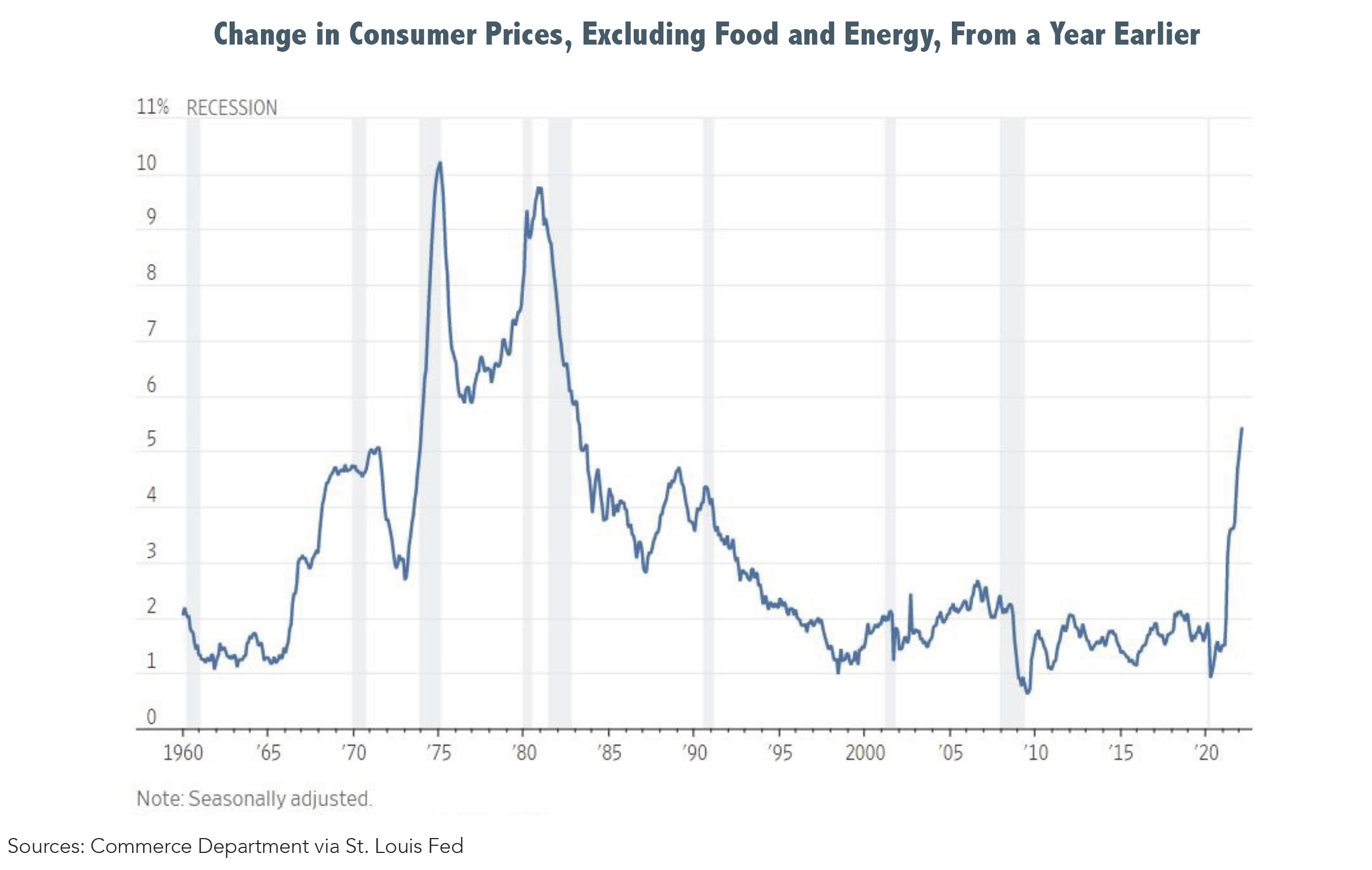 There are many reasons for elevated inflation but it all boils down to too many dollars (demand) chasing too few goods and services (supply).  Supply chains are disrupted, evidenced by computer chip shortages for new cars and trucks, resulting in a 12% drop in Q1 sales as dealers struggle to find inventory. New car prices are now mostly non-negotiable and used car prices have gone through the roof as consumers pivot to buy what’s available. Added to higher automobile prices are higher prices at the pump. A gallon of regular gas averaged $4.22 in March compared to $3.52 in February.  Oil prices hit $123 per barrel during the quarter and still hover above $100 per barrel.  As sticky as inflation has remained, in a recent survey by the Wall Street Journal, respondents believe inflation will slowly come down over the next year to 3.5% and average 2.5% over the next ten years.  We shall see.

Despite Russia’s war against Ukraine, the Federal Reserve’s war against inflation, and the CDC’s war against COVID-19, for the long-term, goal-focused, plan-driven investor it is all irrelevant. It’s irrelevant first, because you can’t do anything about it except possibly pray for and support the Ukrainians, modify your consumption patterns (carpool to work, eat fewer chicken wings, etc.), and adopt personal practices to limit your exposure to all viruses, not just COVID-19.  Next, it’s irrelevant because most successful investors do not base their investment policy on predicting the economy, inflation, interest rates, Fed policy, pandemics, or the outcome of war, none of which can be predicted with any degree of certainty. The economy is going to do what’s it’s going to do, and a collection of the world’s greatest companies will continue to do what they do best and creatively adapt to overcome whatever challenges they face. 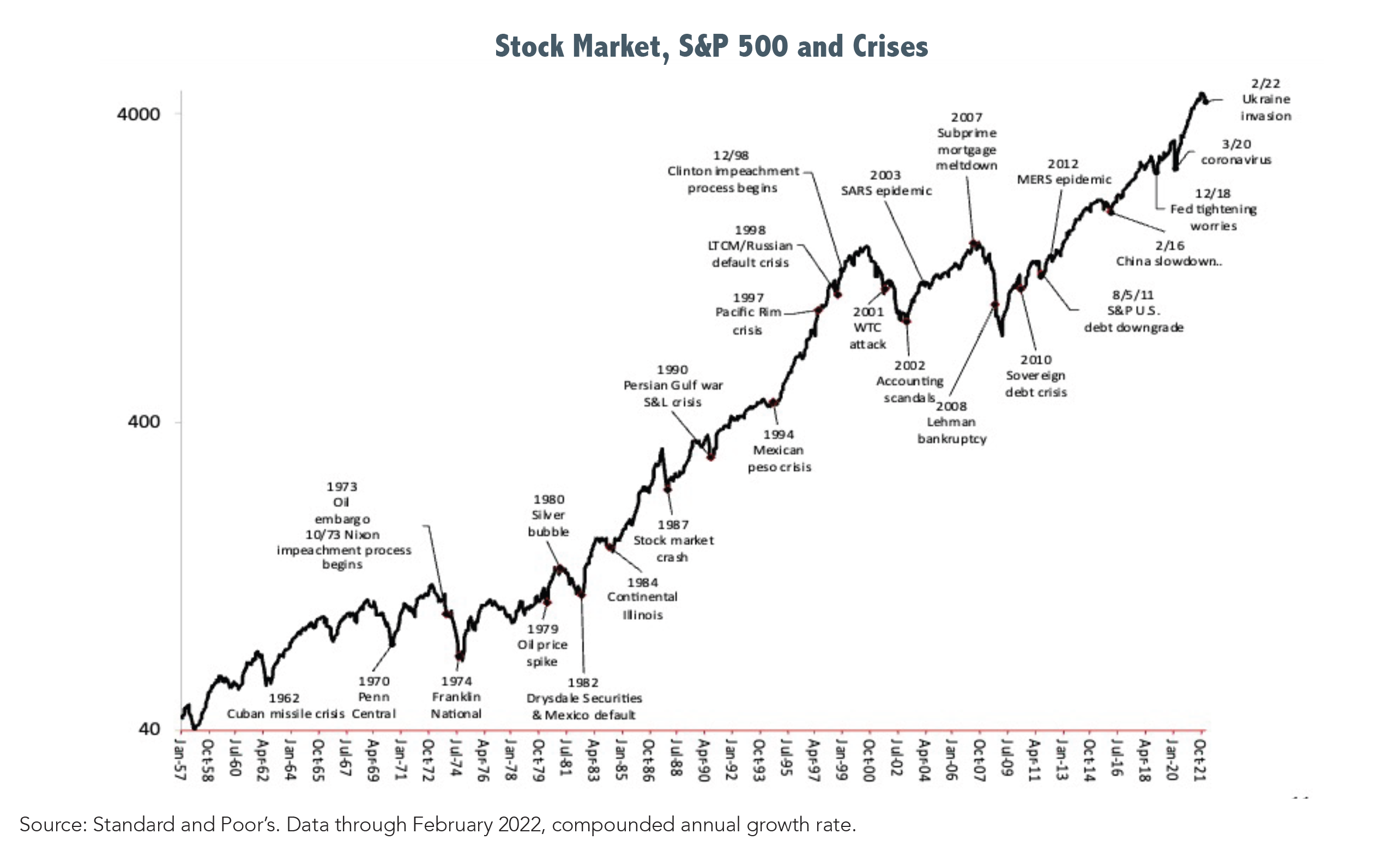 Successful investors fight the natural temptation to panic with an impulsive response to the myth that this time is different.  It’s never different.  Instead, they base their actions on a rational understanding of their need to live within their means, save sacrificially and invest prudently if they expect to achieve their life’s goals. They understand that markets are volatile and always uncertain, and today’s crisis will be yesterday’s news. They understand the need to look neither right nor left, but constantly forward and let the hyper-panicked financial journalists do what they are paid to do – scare those who will listen to them out of prudently constructed portfolios, ignoring intelligent financial plans and sound advice and jump headlong into the stream of failure that ends in unmet expectations.  Don’t let it be you.