Wednesday, June 13, the Federal Reserve’s Open Market Committee (FOMC), as expected, raised the Fed Funds Rate by 0.25% to a target range of 1.75% - 2.00%.  Additionally, they indicated a likelihood of four total hikes this year, up from three predicted at their last meeting.  This week’s rate hike is the second this year and the seventh since they first started raising rates in December 2015.  The Fed began aggressively lowering rates during the Great Recession of 2007-2009, driving the Funds rate from 5% to 0% in a little over a year where it then remained for almost a decade!
Now, with growth picking up and unemployment at levels not seen since the 1960s the Fed is trying to keep this economic engine between the ditches so to speak – not too hot, not too cold.  At this week’s meeting, the Fed increased its estimate for economic growth for 2018 from 2.7% to 2.8% as measured by the GDP (Gross Domestic Product).  Additionally, they raised their PCE (Personal Consumption Expenditures) inflation forecast for 2018 from 1.9% to 2.1%.   Even though the Fed’s comments are considered more hawkish than before, their 2019-2020 forecasts indicate a slowing GDP with stable inflation as the positive effects from the recent tax-stimulus bill abate. 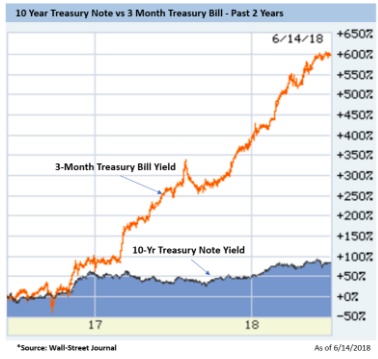 The Fed Funds Rate is the rate at which banks lend excess reserves to one another and the Fed can influence that rate through changes in the money supply, a process known as monetary policy. Increases in the Fed Funds Rate impact rates charged on credit cards, car loans, bank loans and other shorter-term debt obligations.  It is an “administered” rate, not to be confused with market rates which are the result of actual supply and demand.  Longer-term rates, such as home mortgages are not directly correlated to movements in short-term rates for numerous reasons.  As illustrated in the chart to the left, short-term rates have gone up significantly more than long-term rates over the past two years.
For clients of Wealthview Capital who own bonds in their portfolios, this is a situation of short-term pain for long-term gain.  Since bond prices typically move in the opposite direction of interest rates an increase in market rates causes bond prices to fall - the longer the maturity, the more the bond will fall in value.   Our short-duration bond portfolios are structured to reduce this downside volatility while allowing us to take advantage of rising rates over time.  As our bonds mature, proceeds are being re-deployed at higher market rates, even if the current higher rates are still well below historical averages.
Equity investors worried about a sustained sell-off in stocks due to rising interest rates might note that there is no empirical evidence linking the two.  The current price of any company or group of companies (the market) is a function of numerous factors including forecasted earnings, dividends, inflation and interest rates among others. Rising rates can act as a temporary barrier to equity gains but if interest rates are going up because of increased economic activity, that should show up in higher earnings and rising dividends, which is a pretty good picture of our current environment. Stocks will always go through periodic short-term sell-offs, but for long-term investors with a sound financial plan designed to identify an optimal balance between stocks for growth and bonds for income and safety, such pull-backs are expected and may even represent an investment opportunity.
Return to blog index