The Gift That Kept on Giving | 2017 Year in Review 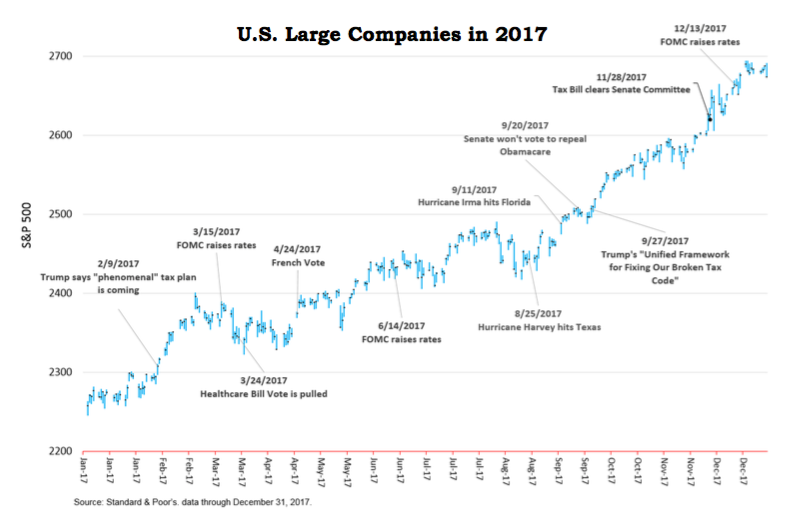 The momentum that began in the aftermath of the 2016 Presidential election continued unabated throughout 2017 making it a year to remember.  Record after record fell headlong in the face of an onslaught of solid domestic and global economic growth that lifted earnings, dividends, and stock valuations.  The S&P 500 and the Dow Jones Industrial Average each broke over 70 record highs through the course of the year with unprecedented low volatility.  The largest decline in the S&P 500 last year was just 3% compared to an average 14% intra-year drawdown over the past 37 years.  Opportunities like 2017 don’t come along often and long-term investors cannot afford to sit on the sidelines frozen by fears of valuations, politics, interest rates or any other innumerable distractions.  Some of the highlights from 2017 include the following.

Congress finally got around to passing its long-awaited tax reform bill which President Trump signed into law on December 22.  The biggest news was a reduction in the corporate income tax rate to 21% from 35% which was the highest rat
e among the world’s developed nations.  American companies should now be in a better position to compete globally through increased investment in plants and equipment, research and development, and hiring which could provide a second-stage boost to the economy.  Any increase in earnings and dividends should benefit shareholders who provide the risk-based capital on which those same corporations depend.  Lower taxes for increased prosperity all around offers a win-win opportunity and hopefully, resulting economic growth will offset inevitable increases to the debt.

Contrary to projections from numerous economists that 2% growth was going to be the new normal due to changing demographics (and by golly, we better get used to it), 2017 produced the first back to back quarterly 3% Gross Domestic Product (GDP) numbers since 2014. It appears likely that 4th quarter growth may come in at 3%+ when released in late January.  As if that wasn’t enough, 2017 marked the first time this century that all the world’s major economies were growing simultaneously.  That growth had to be reflected somewhere and, sure enough, it was – in earnings.

Profit margins are trending higher with 75% of S&P 500 companies beating their most recent (3Q17) consensus earnings estimate. Revenue growth of 9.3% in 3Q17, while impressive, was slower than prior quarters, primarily due to stronger year-over-year comparisons making the hurdle rate higher.  The afore-mentioned tax reductions may provide an additional boost in corporate profitability ranging from 6% - 10%.

The Federal Reserve increased interest rates 3 times in 2017, most recently on December 13 when they raised the federal funds rate by 0.25% to a range of 1.25% - 1.50%.  This marked the 5th increase since this round started in December 2015 when the range was 0% - 0.25%.  They also announced the continuation of their balance sheet “normalization” process by continuing to allow maturing bonds and mortgages purchased during the previous 3 rounds of quantitative easing (QE) to roll off their balance sheet.  This lack of buying going forward along with manual hikes in the federal funds rate is expected to help guide overall rates higher across the yield curve. We shall see. Some market rates are higher now than when the Fed started two years ago, most notably on the short end of the yield curve where rates have doubled and tripled, albeit from a very low base.

The one thing we don’t want to see is continued flattening, or even worse, an inverse in the yield curve.  This happens when short term rates go up faster than long term rates and can result in a recession if it goes too far, too fast.  Finally, there will be a changing of the guard at the Federal Reserve in February as Janet Yellen will be replaced by President Trump’s preference, Jerome Powell.  A current Federal Reserve Board of Governors member, Powell is believed to be somewhat dovish to neutral in his monetary policy philosophy.

Inflation remained tame in 2017, consistently below the Fed’s forecast and there are some clues as to why. Deflation in manufactured goods and co

mmunication services is offsetting other price increases.  Non-brick and mortar retailers (i.e. Amazon) and online comparison shopping are also believed to be holding down prices.  Additionally, rising employment costs continue to be offset by gains in productivity.  All of this is welcome news to the financial markets.

As previously mentioned, common stocks delivered one of the best performances in years led by emerging (MSCI EM) and developed international markets (MSCI EAFE) + 38.37% and 26.27%, respectively.  Broad-based U.S. markets all posted double-digit returns. As the market rapidly approaches the nine-year anniversary of the bottom set in March 2009, many investors are wondering if it is over-valued.  The answer to that question depends on how you look at it.

Last year had its share of negative news (think hurricanes and North Korea) and zany themes (think tweets and crypto currencies).  Those who allowed themselves to become distracted from their sober wealth creation mission of adequate saving and prudent investing (not speculating) did so at their own peril.  It was not necessary to take high risks in 2017 to book returns substantially greater than equities’ long-term average, with extremely low volatility to boot. To benefit, one only had to participate in a broadly diversified, risk-appropriate investment strategy.

Markets will always be susceptible to exogenous shocks, be they from a dictator in North Korea, a tweet from the White House or catastrophic weather events. Given the strength of the markets in 2017, it is unlikely we will see a repeat in 2018.  However, if last year proves anything it is the fallacy of trying to time the market and the prudence of owning a broadly diversified collection of the greatest companies ever known.  Few so-called experts predicted the height and breadth of the market’s ascent in 2017.  To benefit from this incredible wealth creation opportunity, one simply needed to show up.

That begs the question – what is the purpose of any investment program?  Is it simply an exercise of trying to perpetually garner some esoteric return quarter after quarter, year after year, jumping from one idea to another in search of the greater gain?  If so, to what end? The professionals at Wealthview Capital do not view investing as a game, nor in a vacuum, but instead as a critical component in your overall financial plan. The allocation between equities for growth, bonds for income and cash for liquidity is not something that should be arbitrarily selected.  It should flow objectively from an in-depth planning process that is designed to help you identify and fund your life’s most important goals but without unnecessary risk.

Best wishes for a prosperous 2018.