Stocks have been in a tug-of-war lately between bulls who believe everything is just fine, thank you, and bears who fear a recession must be imminent.   One week it’s up, the next down and then back up again.   The primary cause of this recent lack of direction is uncertainty as to the status of our economic porridge.  Is it too hot, too cold or, just right?  That all depends on how you read the tea leaves.

Returns from equities were mixed during the third quarter with large U.S. companies (S&P 500) being the only major sector posting positive returns, +1.70%.  July started off like gangbusters as dovish comments from the Fed bolstered investor confidence that a much-anticipated cut in interest rates was imminent.  It was short-lived however, because once the cut was announced on July 31st, stocks began selling off on Chairman Powell’s comments that the move “did not signal the start of a lengthy rate cutting process”.   August and September were mostly backing and filling until finally closing out the quarter within shouting distance of all-time highs, even with those mixed results.  Year-to-date returns were off the charts, led once again by the S&P 500, up an astounding +20.55%.  Overseas, returns continued to lag as trade wars, slowing economies and geopolitical issues caused investors in foreign markets to stand down.

The August PMI® (Purchasing Managers’ Index) registered 49.1 percent, a decrease of 2.1 percentage points from July’s reading of 51.2 percent.  This is the first reading below 50 in the PMI® since August 2016 and points to a contraction in manufacturing.  Most survey participants attribute the current situation to the on-going trade war and their comments reflected a decrease in business confidence.  Manufacturing comprises just 11% of our GDP (Gross Domestic Product) and the PMI® survey reported that the overall economy grew for the 124th consecutive month, extending the duration of our longest-ever economic expansion. 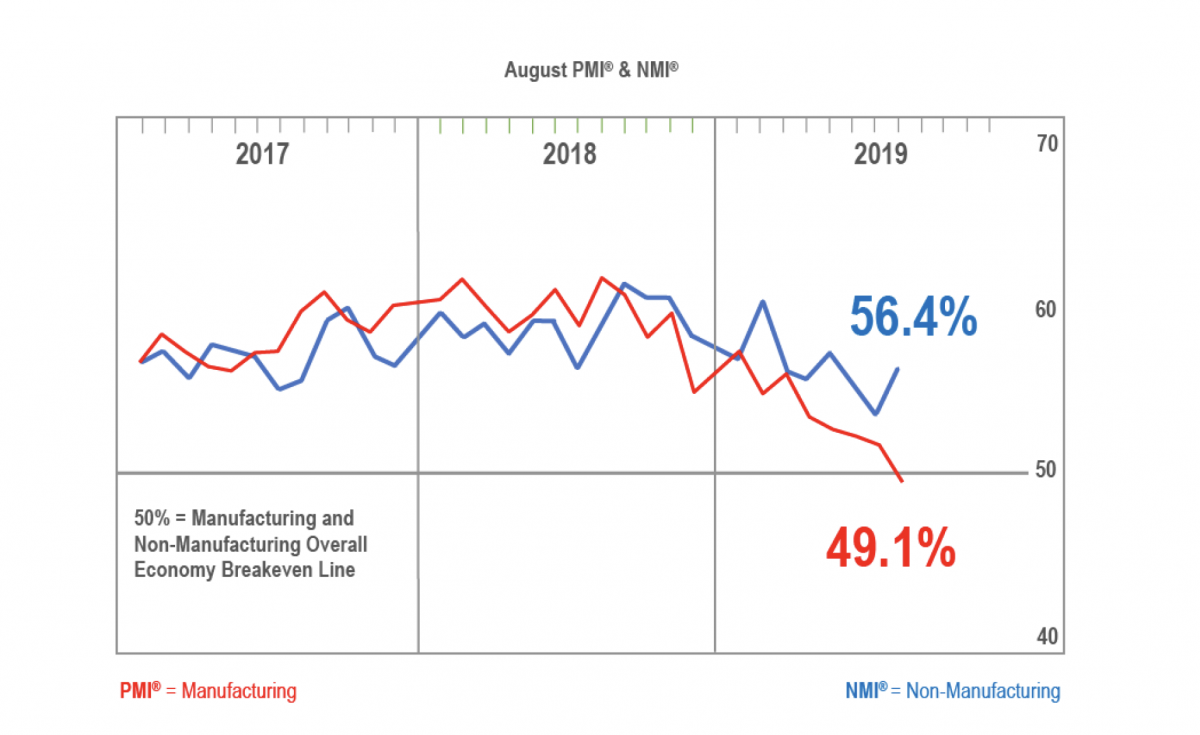 The NMI® (Non-Manufacturing Index) which measures the far larger, service sector of our economy grew in August to 56.4%, a gain of 2.7% from July’s 53.7% reading.  According to the ISM® (Institute for Supply Management) NMI® survey respondents remain concerned about tariffs and geopolitical uncertainty; however, they are mostly positive about business conditions.  For both the PMI® and the NMI® a reading above 50 suggests that sector of the economy is generally expanding; below 50 indicates contracting conditions.

The most recent GDP estimate available showed the U.S. economy grew at a 2.0% real (inflation-adjusted) rate in 2Q-19 compared to an increase of 3.1% in the first quarter.  According to the BEA (Bureau of Economic Analysis) the increase in real GDP reflected increases in consumer and government spending that were partly offset by decreases in private inventory investments, exports, housing investment and business investment.  Imports, which are a subtraction from GDP, decreased.   A real growth rate of 2% in a $21 trillion economy is nothing over which to lose your appetite.

Retail Sales are cooking at a healthy clip, +0.4% in August with July revised up to +0.8% from an earlier estimate of +0.7%.  Consumer spending comprises 70% of GDP so if the consumer keeps consuming, things are moving in the right direction.  The jobs market remains strong with a near-record number of job openings and an unemployment rate of 3.7%, a 50-year low.  Headline inflation continues to run below the Fed’s 2% target as measured by PCE (Personal Consumption Expenditures) its preferred gauge.   Over the past twelve months through August it averaged just 1.4% and core PCE (which excludes more volatile food and energy) was +1.8%.  A different inflation gauge, the core CPI (Consumer Price Index), was up +0.3% (excluding food and energy) in August for the third consecutive month which caused interest rates to head higher and may result in less dovish pressure on the Fed.

As mentioned previously, the Fed lowered the Fed Funds rate for the first time in 11 years on July 31.  The ¼ percent decrease to a range of 2.00% - 2.25% was not enough to satisfy investors who wanted a larger cut, which goes to prove you can’t please all the people all the time.   The FOMC (Federal Open Market Committee) then voted again on September 18 to lower rates a second time by another ¼ point to a range of 1.75% – 2.00%.  The vote was not unanimous with two members wanting to keep rates unchanged and another preferring a larger cut.   This uncertainty among FOMC members is an example of how imprecise monetary policy is, so it’s no wonder individual investors remain confused about our economic outlook.  Across the pond, the ECB (European Central Bank) is moving to implement a new stimulus package attempting to ward off recession in the eurozone as growth there has slowed significantly.  With rates at or close to zero, and even negative rates in some sectors, President Mario Draghi and his ECB colleagues may be pushing on a string.

The BEA reported that corporate profits increased 3.8% (quarter-over-quarter) in 2Q-19.  FactSet is currently projecting 3rd quarter earnings will decline -3.6% (year-over-year) which would be the first time since 2Q-16 that earnings growth declined three consecutive quarters (year-over-year).  Interest rates plummeted in August, hitting a low on 09/03/19 and then jumped up in response to those core CPI inflation readings.  However, they are still lower today than at the end of 2018 as evidenced by the 10-year U.S. Treasury note that was yielding 1.68% on 09/30/19 compared to 2.68% on 12/31/18.

As is the case every quarter, the most recent period contained its share of headlines over which an investor can obsess.  Recent examples include the ongoing U.S. - China trade dispute, Presidential tweets and impeachment inquiries, unrest in Hong Kong, the ongoing Brexit saga, provocative missile launches by North Korea, strikes on Saudi Arabian oil facilities, slowing growth around the world and an inverted yield curve.  In his September press conference, FOMC Chairman Powell said “…we see a favorable economic outlook with continued moderate growth, a strong labor market, and inflation near our 2% objective.”  The small business optimism index is strong, inflation expectations are falling, and consumer and government spending are growing.  Weakness is in manufacturing and exports.  According to our consulting economist, Dr. Fritz Meyer, “Apart from manufacturing, the economic data continue to look good.  Consumer income, spending and net worth have never been stronger and will likely sustain U.S. economic growth.”

With the S&P 500 companies paying a current dividend of 1.87%, equities don’t look so expensive when compared to that 10-year U.S. Treasury note, especially if one has a 10-year or longer investment horizon.  If you buy the U.S. Treasury note at 1.68%, you will likely experience a negative real return (after taxes and inflation) over the next decade.  Equities, on the other hand, have a history of increasing earnings, dividends and shareholder value over most 10-year time periods going back to 1926.   It doesn’t mean that will be the case over the next ten years, nor does it mean one should put all their available investment dollars into equities.  The optimal mix between stocks, bonds and cash is different for everyone and depends on your income and liquidity needs, risk tolerance, time horizon and numerous other variables, all of which are considered in Wealthview’s financial planning process.

One can always look at the glass as half-full or half-empty and the porridge as too hot, too cold, or maybe just right depending on your proclivity.  All economies go through cycles of growth, followed by contraction which sets the stage for the next growth cycle.  To base your long-term investment strategy on trying to predict the next phase of that cycle is a dangerous practice.  At Wealthview we believe the tortoise will beat the hare in the long-run and that having an intelligent, goals-based plan is a more productive use of your time and energy than reading tea leaves or jumping from one proverbial porridge bowl to the next.