The market rose effortlessly during the first four months of 2019, lifted by the twin propellers of the Federal Reserve’s interest rate pivot and the belief that China and Uncle Sam were close to a trade deal.  However, it began encountering turbulence when Fed Chairman Powell hinted that a rate cut might not be in the cards for 2019 as some had expected.  Then President Trump, tiring of perceived delay tactics on the part of the Chinese trade delegation, announced the U.S. would increase tariffs from 10% to 25% on $200 billion worth of Chinese goods effective May 10 and may add another $325 billion to that figure.  The Chinese, as expected, responded by announcing they would increase tariffs on $60 billion of imported goods and threatened to halt purchases of U.S. agricultural and energy products altogether.  To no one’s surprise, stocks hit an air pocket and dropped immediately on the tariff news. 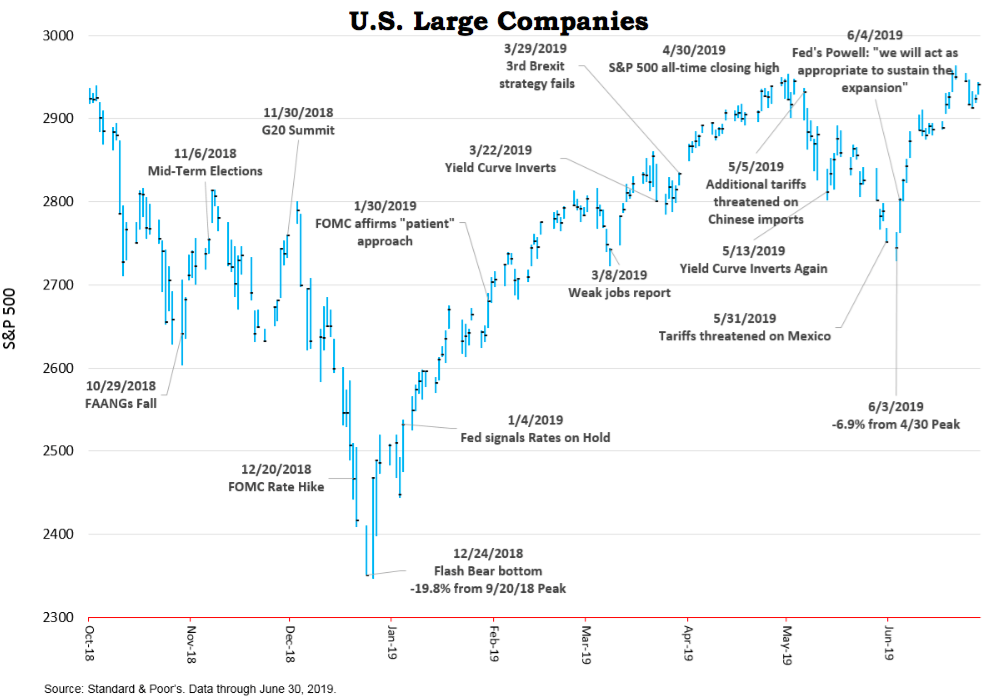 Several events occurred in May that resulted in stocks falling throughout the month: China hinted they may sell our Treasury bonds, British Prime Minister Theresa May resigned after several failed attempts to influence the UK’s EU exit,  and a surprise tweet by President Trump announcing a tariff would be imposed on all Mexican imports until the flow of illegal immigrants through Mexico is curbed.  Then, on June 4th, just as the faint of heart started heading for the exits, the market bottomed, and we were off to new highs.  Federal Open Market Committee (FOMC) comments led investors to believe a rate cut in 2019 is now a “fait accompli” and U.S. administration officials said Mexican tariffs would be rescinded.  Iran then shoots down an unmanned U.S. drone creating fears of a military strike by the U.S.  It’s enough to give one motion sickness!  After all that zaniness, stocks posted solid results across the board for 2Q19 with our largest U.S. companies (S&P 500) leading the pack +4.30% for the quarter.  The first half of 2019 produced impressive double-digit returns from all major indexes, again lead by large domestic companies (S&P 500) +18.54% (dividends included), the best first-half performance by the S&P 500 in over twenty years! 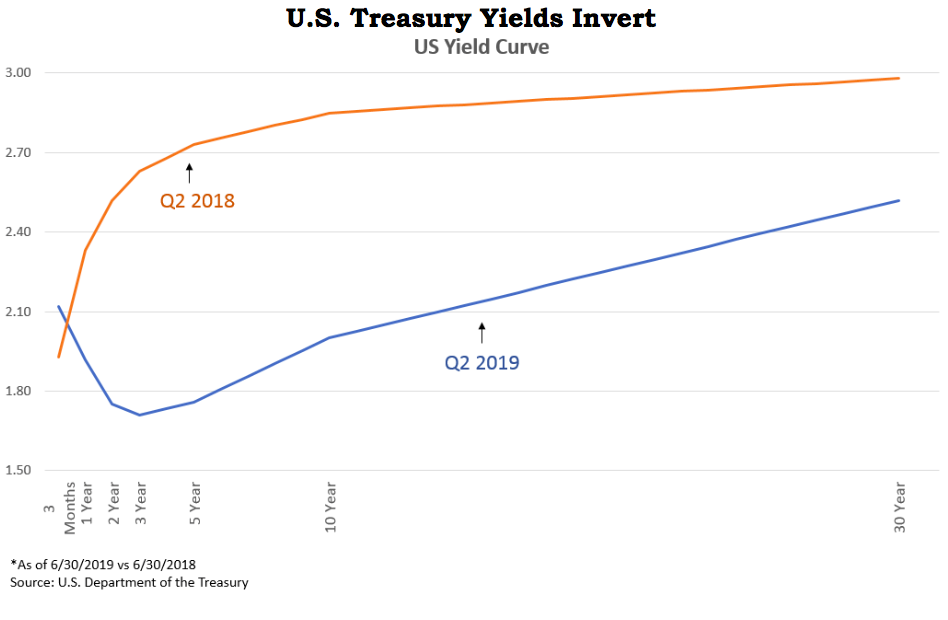 Interest rates continued their downward spiral during the first half of 2019 as softening economic data here at home and abroad led investors to bid up bond prices, thus reducing yields.  As of the second quarter’s end the yield on the 10-year U.S. Treasury note stood at 2.00%, down from 3.25% last fall.  The 2-Year note now stands at 1.75%, down from a recent high of approximately 3% on November 8, 2018.  The shape of the yield curve has transitioned from flat (yields that are about the same along the maturity spectrum) to slightly inverted with short-term rates (2.12% on the 3-Month T-Bill) being higher than longer-term rates (2.00% on the 10-Year Note).   Many economists believe an inverted yield curve is a precursor to an economic recession but that doesn’t guarantee it will happen this time around.

Market rates are not to be confused with administered rates such as those determined by banks and the Federal Funds rate that is in the news so much these days.  The FOMC and Chairman Jerome Powell have been the target of much criticism for raising rates in December as signs of a slowdown were becoming evident.  The Fed is charged with the dual mandate of maintaining full employment and keeping inflation under control.   No easy task if you ask me, but they seem to be doing a pretty good job.   Our bond benchmark, the Bloomberg Barclays 1-5 Year Government/Credit gained 1.92% in 2Q19 and 3.56% in the year’s first six months, reflecting price gains consistent with a decline in interest rates.

The U.S. economy is currently flashing mixed signals.  The Conference Board’s most recent LEI (Leading Economic Index) reading was unchanged in May, indicating a moderation in economic activity. The jobs report for May, showing only 72,000 new jobs, was a big disappointment but bounced right back in June with the addition of 224,000 jobs and a 3-month average gain of 171,000.  The ISM manufacturing index dipped in May to 52.1% from 52.8% in April.   However, the ISM Non-Manufacturing Index (service sector companies) ticked up in May to 56.9% from 55.5% in April. Service-sector jobs now comprise 88% of all jobs so that index is very encouraging.   Retail sales (net of inflation) are booming.  Since consumer spending comprises 70% of our economy, this is a very important economic gauge to monitor.   Inflation is consistently running under 2% and unemployment at 3.7% is nearly the lowest in 50 years.  Finally, the current economic expansion, at 120 months, is now officially the longest expansion in modern U.S. history.  Congratulations! 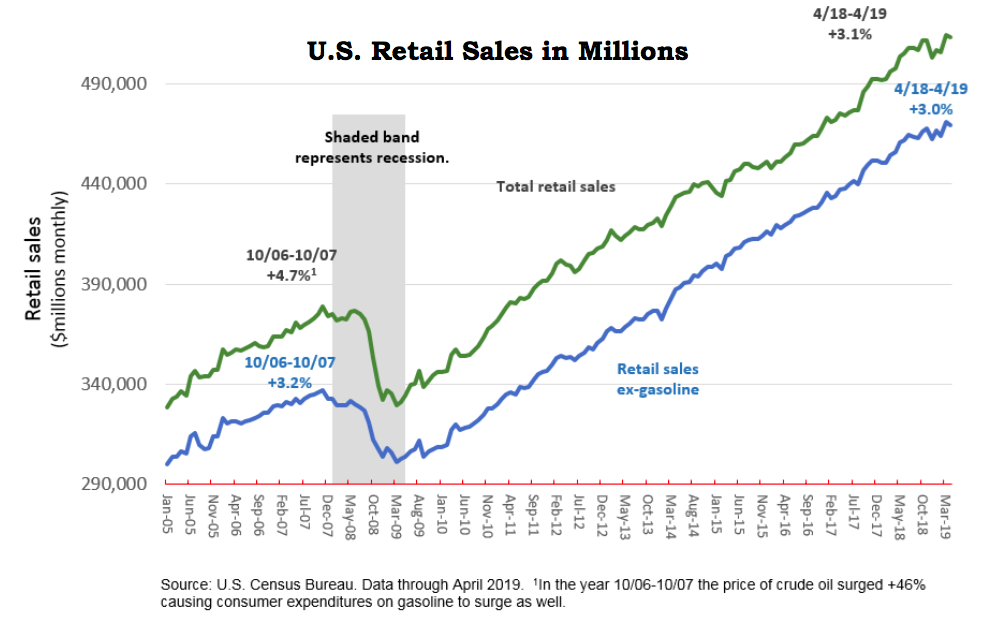 The G-20 Summit in Japan wrapped up as the quarter ended and it appears that China’s Chairman XI and President Trump agreed to a cease-fire in additional tariffs.  That may or may not last.  China has long been exploiting our intellectual capital and playing by a different set of rules in the global trade game.  Do we want that to continue when our exports to them equal only 1% of our GDP (Gross Domestic Product) yet their exports to us represent 4.5% of their GDP?  Who needs whom more?   The FOMC is scheduled to meet again from July 30-31 and all bets are they will cut their target range for the Federal Funds rate.  Again, that may or may not happen.  A rate cut will be the result of continued evidence of slowing economies combined with continued low inflation.  Do we want a slowing economy so the Fed will lower rates?  Some do, some don’t. 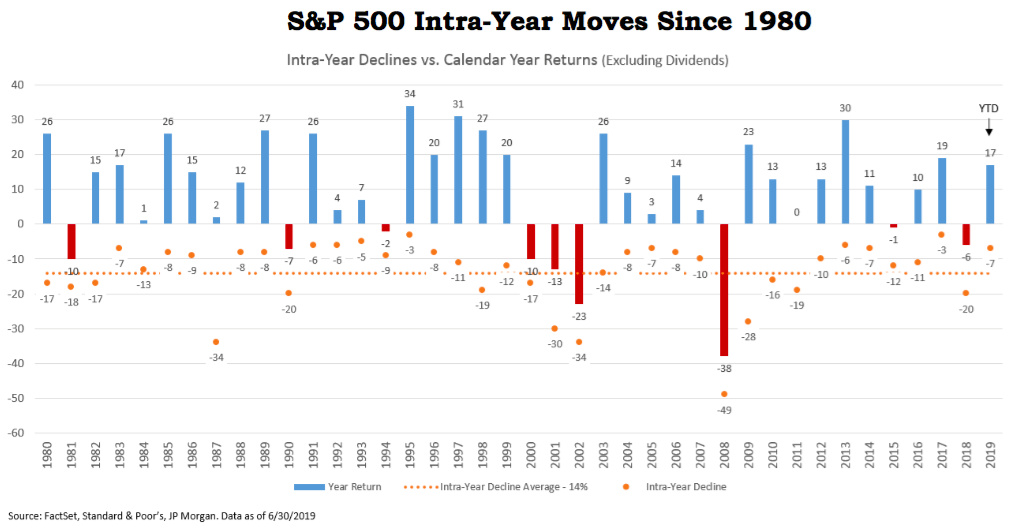 One key to successful investing is being able to stay focused, letting all this noise bounce off you like water off a duck’s back.  Plan, don’t speculate.  Act, don’t react.  Our free-market, capitalistic economic system protected by our democratic republic form of government is more durable than any president, congressman or congresswoman about whom you may currently be concerned.  Presidential tweets, FOMC policy, China, Iran and G-20 summits are all bumps creating turbulence which can cause you to abandon your journey toward your personal goals and objectives.  Simply stay in your seat with your seatbelt securely fastened until you gain cruising altitude.  Once there, the ride is smoother, the skies are less crowded, and you can’t see the potholes over which you are flying but on which the crisis-obsessed media tries its best to get you to panic.  These daily distractions are just that, temporary diversions away from the permanent uptrend of increasing earnings, dividends and shareholder value resulting in broad-based economic prosperity.