Just as everyone settled in for a long winter’s nap following Fed Chairman Jerome Powell’s late 2019 assessment that our economy was in a very good place and could conceivably grow indefinitely, reports of a novel coronavirus outbreak started coming from Wuhan, a city of 11 million people in central China.  A new and deadly virus with an unknown origin and no vaccine that was highly contagious began disrupting supply chains, consumer behavior and financial markets.  Schools, factories, offices and restaurants closed; conferences, concerts and travel plans cancelled; hospitals and nursing homes went on lockdown, and stores soon began running out of masks, disinfectant, hand sanitizer and toilet paper.  A new phrase, social distancing, became part of our lexicon and self-isolation became a daily practice for many.  By the time scientists and epidemiologists could get live samples, create test kits and begin studying the genome sequence to develop a vaccine, the damage was well under way.

The first quarter of 2020 was a tale of two periods, before and after February 19th.  The new year started off with investors basking in handsome gains from last year and focused on new retirement legislation, trade deals, election primaries and a looming impeachment trial among other preoccupations.  The SECURE Act, passed in late December, made numerous changes, beginning in 2020, to retirement plan rules, most notably delaying the beginning age for RMDs (required minimum distributions) from 70 ½ to 72 and eliminating the stretch provision from non-spouse inherited IRAs. 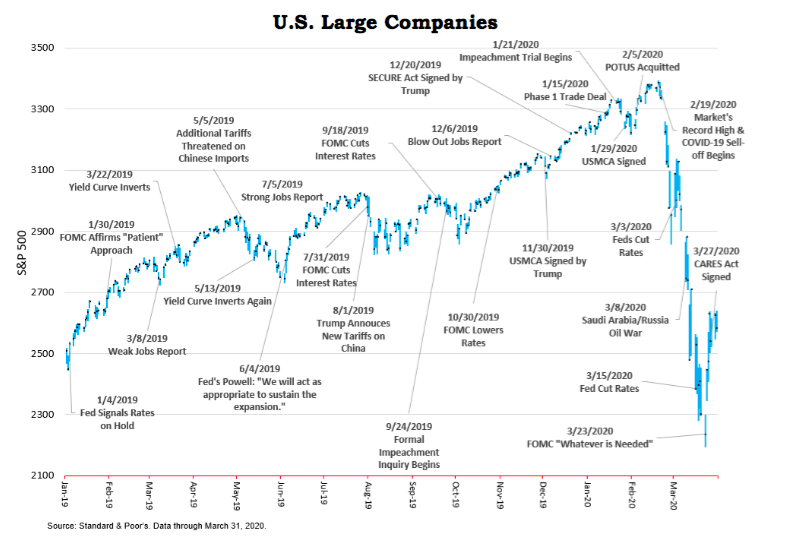 China and the U.S. signed a ‘Phase 1’ trade deal in mid-January that reduced U.S. tariffs on some Chinese goods in exchange for China agreeing to buy more U.S. farm, energy and manufactured goods and address complaints about Chinese intellectual property practices.  That was followed by the USMCA trade agreement between the U.S., Mexico and Canada that formally replaced NAFTA.  On the political front, the U.S. Senate began the long-awaited impeachment trial of President Trump, the outcome of which was never in doubt, Britain finally approved its exit from the EU, and the Democratic party’s slate of presidential candidates winnowed to two.  In financial markets volatility increased with wild swings from day to day as investor sentiment vacillated between optimism and pessimism.  Equity markets sold-off in late January on initial news of the coronavirus, but then a better than expected January jobs report sent stocks to record highs, culminating on February 19th. 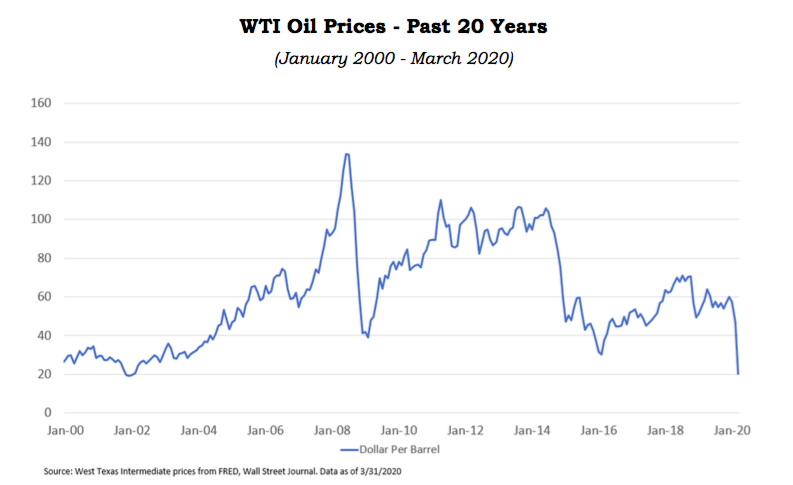 Starting on February 20th, markets reversed course with a visceral reaction to the growing realization that COVID-19 was something that may have more serious and long-lasting implications.  Equities, corporate bonds and oil prices fell rapidly on fears of a world-wide recession.  On March 3rd the FOMC (Federal Open Market Committee) announced an emergency cut of 0.50% in the Fed Funds rate, but instead of bolstering confidence, it had the opposite effect.  Adding insult to injury, on March 8th Russia and Saudi Arabia began a price war that eventually drove oil to $20/barrel, an 18-year low.  Then on March 15th the FOMC responded with a full 1.00% rate cut to a 0.00% - 0.25% range, again with little effect.

The market finally stabilized when in an unprecedented move, the Federal Reserve announced on Monday, March 23rd it will do “whatever is necessary” to support financial markets including back-stopping money market funds and buying government bonds, mortgage-backed securities and even corporate bonds, providing much-needed liquidity to the financial markets.  On March 27th the President signed the CARES (Corona Virus Aid, Relief and Economic Security) act committing $2.2 trillion to provide direct cash payments to all who qualify, enhanced unemployment benefits to workers who’ve lost their jobs, and to provide loans and grants to large and small businesses impacted by social distancing measures and to hospitals overwhelmed by the crisis.  On March 29th the President announced an extension in social distancing guidelines through April 30th trying to bend the COVID-19 curve.

Currently there are three recovery possibilities being discussed, all of which are dependent on the time it takes to arrest COVID-19.  The most optimistic scenario is a V-shaped recovery in which the virus peaks during the summer and growth picks up gradually during the second half of 2020. Output recovers everywhere so that, by the first half of 2021, economies are about where they would have been had the disease never emerged.  A U-shape scenario envisions a more persistent and widespread pandemic and a continuation of a risk-off sentiment. The economic slowdown is longer in duration thus creating a U-shape recovery.  An L-shape recovery would be the most severe, with the virus continuing to spread unchecked throughout the world leading to continued depressed economic activity, reduced asset valuations and loose fiscal and monetary policy for an unknown duration.

Although no one can predict the future with any certainty, we believe the battle over COVID-19 will be won, the current situation will end, and we will recover.  Things will be different on the backside of this crisis, but they always are.  There is also a good chance that people will throw off the recent unpleasantness with vigor and a patriotic spirit, looking for ways to quickly get back to a more normal lifestyle and support those individuals and businesses that bore the brunt of the crisis.  Human ingenuity and creativity are boundless as evidenced by recent announcements from Abbott Labs of a 5-minute COVID-19 test and Johnson & Johnson that they expect to start human trials no later than this September. 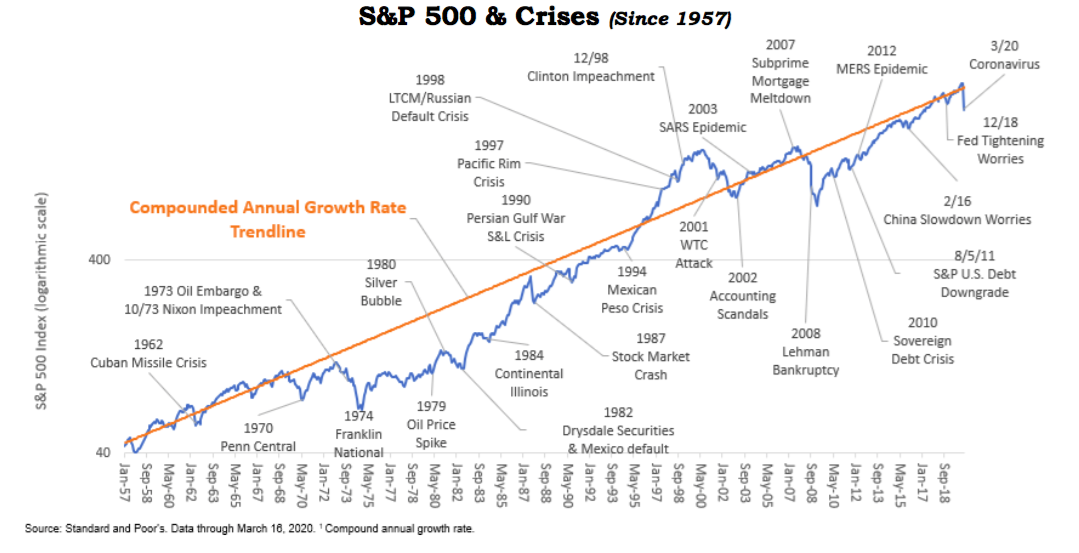 As of this writing the President was floating the idea of using the current low interest rate environment to finance a much-needed, and very large infrastructure package to rebuild highways, bridges, tunnels, etc. putting more people back to work sooner and giving the economy a boost.

At Wealthview Capital, we believe this crisis has simply interrupted, not halted, the incredible progress that began with the formation of our nation and that many will look back on this period with a sense of pride and accomplishment, not only for having endured, but for the level of compassion and selfless sacrifice that rose to the top when needed most.