Investors entered the second quarter with portfolios battered from the impact of the coronavirus pandemic on the world’s economies and by extension, financial markets.  Broad-based equities fell 35% or more beginning February 19 as the global lockdown extinguished millions of jobs and with them, the prospects of sustained economic growth, virtually assuring a recession.  Country after country closed businesses, schools, and places of worship in the controversial attempt to contain the virus.  The impact at home was immediate and devastating as over 40 million Americans filed for unemployment benefits from mid-February through April, resulting in an unemployment rate of 14.7%, the highest rate since the Great Depression.  Then, in a second quarter display of showmanship, the market pulled a rabbit out of its equity hat and produced the largest quarterly gain in over 20 years! It brings to mind a quote often attributed to famed British economist John Maynard Keynes, “Markets can remain irrational longer than you can remain solvent.” 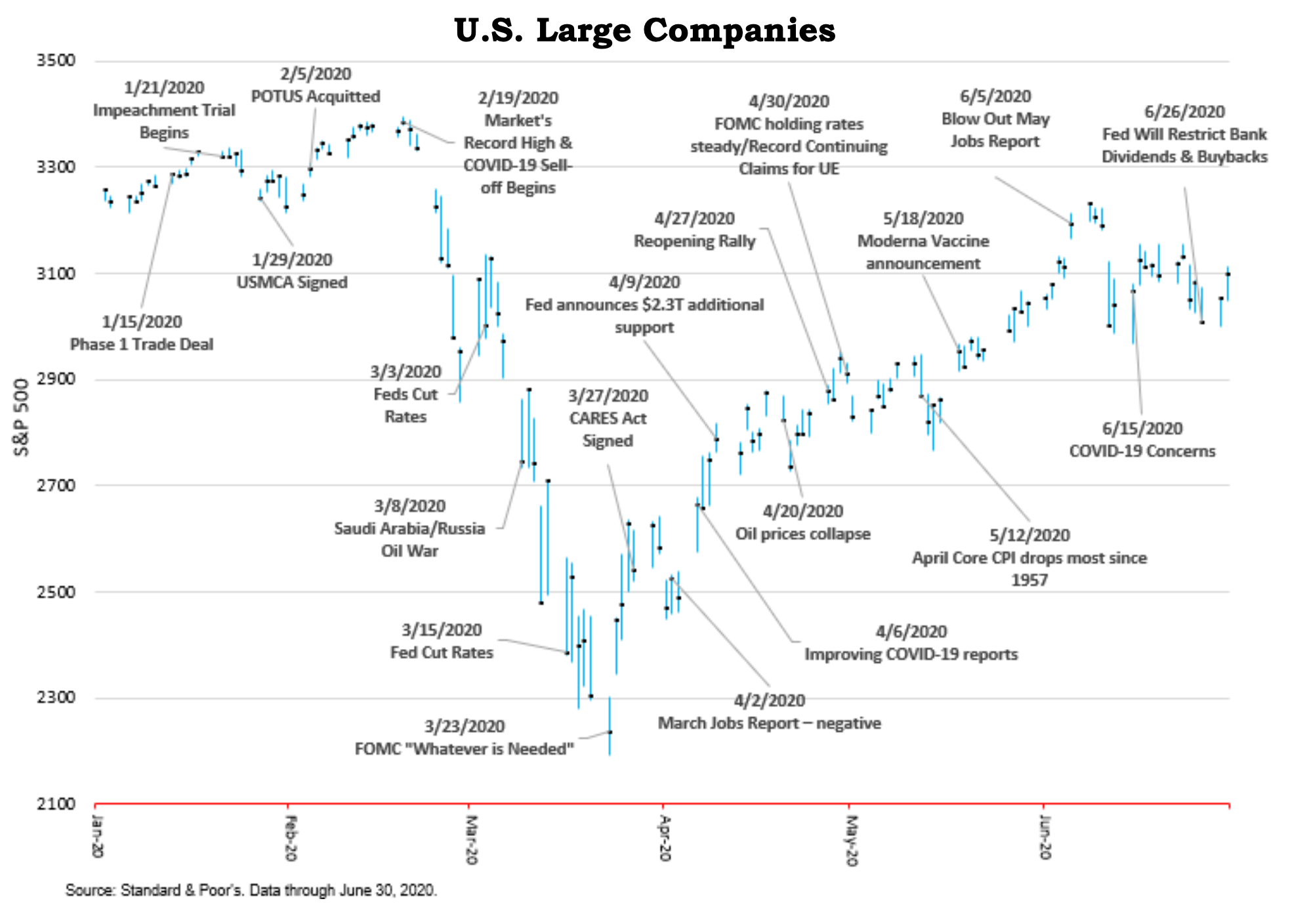 2Q-20 began with glimmers of hope after unprecedented comments by Federal Reserve Chairman Powell that the Fed would do “whatever is necessary to support and stabilize financial markets.”  A swift double-barreled effort of fiscal and monetary actions followed which included record injections of cash to aid individuals, corporations, and institutions along with a drop in short-term interest rates to zero by the Fed.  Investor sentiment became more bullish in May when states began re-opening their economies after a ground-swell of pressure to get Americans working again as infection rates slowed.  Then, on June 5th the May employment report surprised everyone with a gain of 2.5 million jobs (versus an expected loss of 7.5 million) and a drop in the unemployment rate to 13.3%.  From the March 23rd low through June 30th, equities recovered much of their earlier losses in a stunning rally that threw traditional valuations out the window.  April alone produced the largest monthly gain from the S&P 500 in 33 years, and the tech-heavy, NASDAQ index soared to an all-time high in June. This remarkable bounce-back happened in the midst of double-digit unemployment, continued economic uncertainty, nation-wide civil unrest, and fears of a resurgence in the coronavirus.

The second quarter’s final month cooled down April and May’s red-hot momentum.  June was more or less a period of backing and filling as increases in COVID-19 cases concurrent with a re-opening of the economy heightened concerns of a second wave and additional lockdowns.  Lack of buying interest was also attributed to an announcement on 06/25 by the Federal Reserve that it is going to cap dividend payments by banks and restrict their share buyback activity in the third quarter. The Fed’s decision came after recent stress tests and reflects an abundance of caution given the uncertainty surrounding COVID-19 rather than concerns about banks’ capital levels. 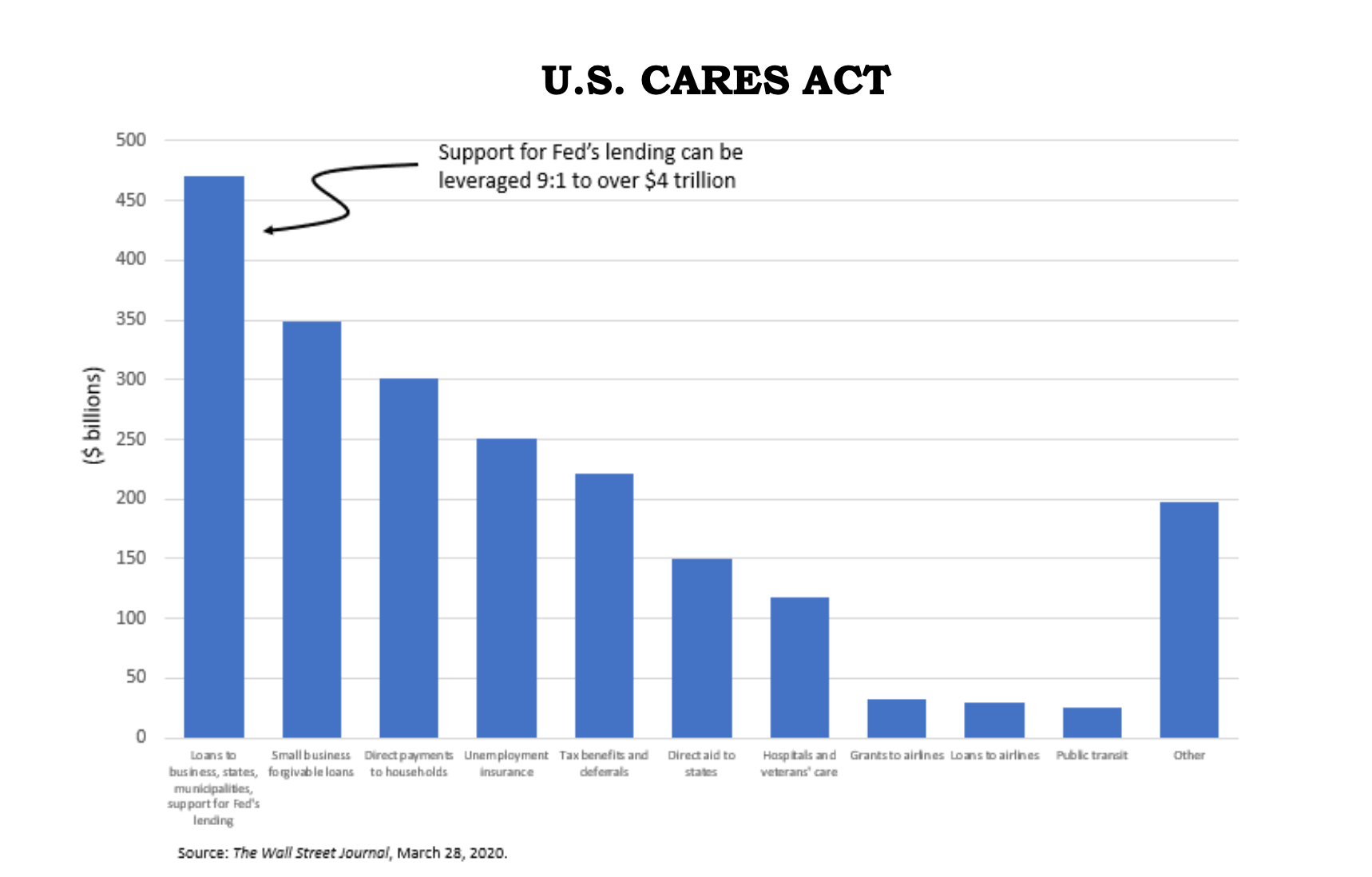 One rationale for current lofty equity valuations in the midst of extreme uncertainty and poor, but improving economic conditions is that many investors believe the worst is behind us and they are focused on 2021 and even 2022 when therapeutic drugs and vaccines are expected to be readily available and the economy back to its pre-COVID state. Another explanation is FOMO (Fear of Missing Out) as those hoarding cash jump into stocks worried that the train is leaving the station.  A third explanation for the recent run up in prices is the lack of viable alternative investments.  Interest rates are so low that most investors face a choice between owning companies with their inherent price volatility or owning bonds which offer little real return potential (after taxes and inflation).  At least stocks offer the opportunity to grow principal over time and return cash from dividends, albeit at an unknown rate.  Short-term, high-quality bonds offer greater principal stability, and for some investors, given recent volatility, that could be enough.  Until things become more certain, one could always hold cash (money markets, T-bills, CDs) with near-zero returns.  Unfortunately, by the time the smoke clears, windows of opportunity will likely be closed for those choosing to go to the sidelines in the interim.

Interestingly, interest rates on longer-term U.S. Treasuries have not risen along with equity prices as one might expect, since higher yields typically accompany improved economic fundamentals.  At the start of 2020, the 10-year Treasury note yielded 1.92%, and fell to 0.76% by the market’s March 23rd bottom.  From that low, the S&P 500 gained 38.5% through quarter-end, yet the 10-year note fell further to 0.65%, potentially indicating a less optimistic economic outlook from investors in Treasuries.  Federal Reserve Board Chairman Powell recently stated his opinion that the Fed will not be raising short-term rates anytime soon, that he thinks it will be a long road to recovery and that Congress should not back off from its stimulus measures.  Bulls believe (or hope) the worst of the virus and economic carnage is behind us and are looking for a V-shaped recovery, while bears are yet to be convinced, and think a longer, L-shaped (or worse) scenario is more likely. 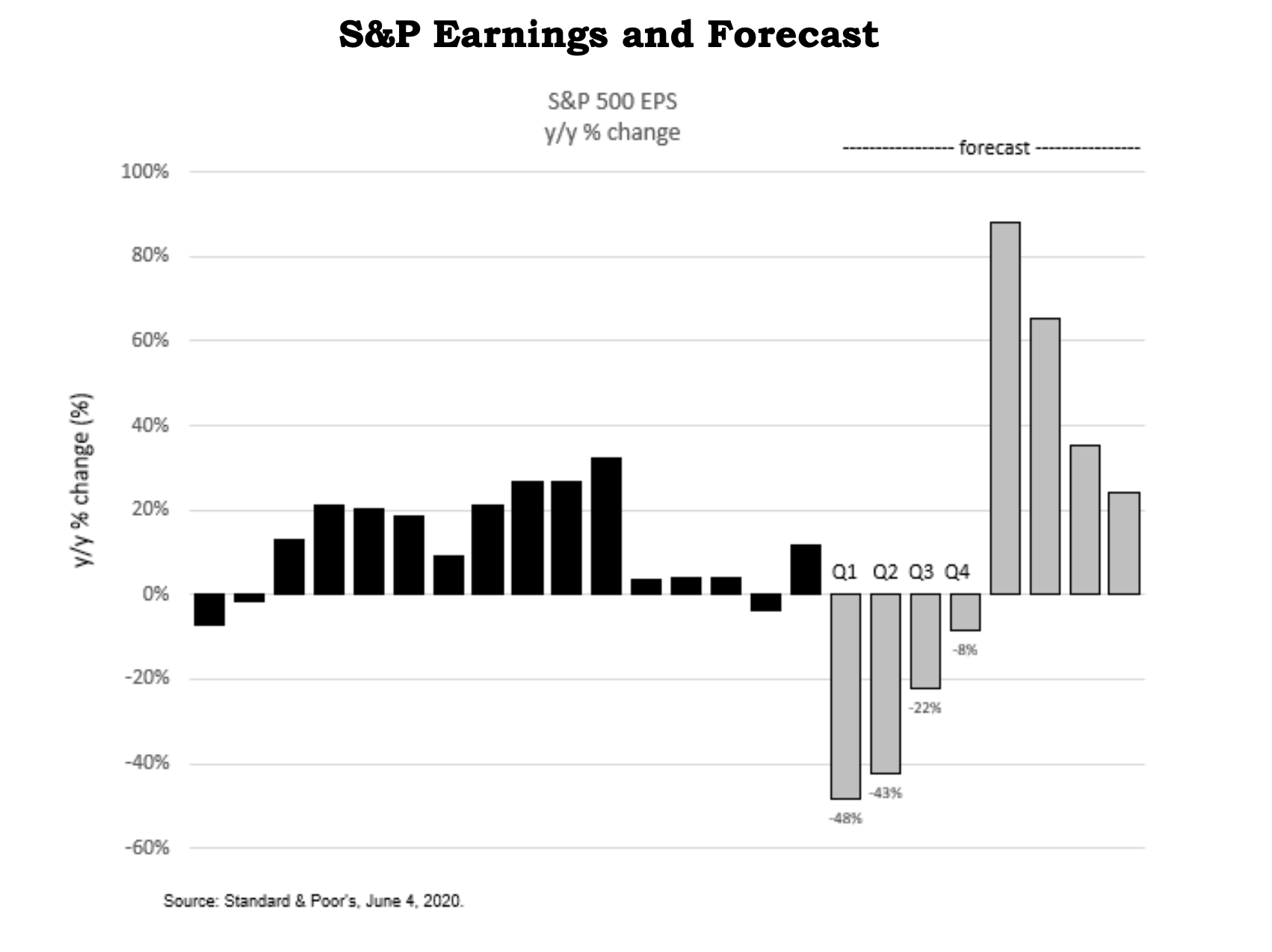 As usual, the near-term outlook is mixed with numerous positives and negatives, but mostly unknowns. Economic conditions remain uncertain as millions of jobs have been shed since February, retail sales are far below pre-pandemic levels and many businesses that closed will never re-open. Manufacturing activity in the U.S. has also contracted, albeit at a more gradual rate.  Adding to the uncertainty is the drama associated with an election year.  As one example, the Trump administration’s tax reductions are at stake depending on which party, if either, controls tax policy.  However, according to the Wall Street Journal, a second wave of coronavirus cases was cited as the most prominent risk facing stocks for a fourth consecutive month (June survey of 190 fund managers by Bank of America) and is supported by the daily infection rate for COVID-19 in the U.S. which just hit an all-time high of 50,000.  Permanently high unemployment and a Democratic sweep of the election followed as the second and third most prominent risks.

The Federal Reserve and Congress have indicated a receptiveness to continue with massive stimulus efforts for as long as needed and are putting our money where their mouths are.  On July 1st Congress passed an extension through August 8 for the PPP (Paycheck Protection Program). Maybe these efforts will not be needed much longer.  As of this writing the 3rd quarter started off with a bang after a second consecutive blow-out jobs report.  The DOL reported on July 2nd that the U.S. gained 4.8 million jobs in June, following May’s revised gain of 2.7 million which indicates a faster return to the workforce than many anticipated.  The unemployment rate now sits at 11.1%, down from 13.3% in May and 14.7% in April, but still a long way from February’s 3.5% rate, a 50-year low. 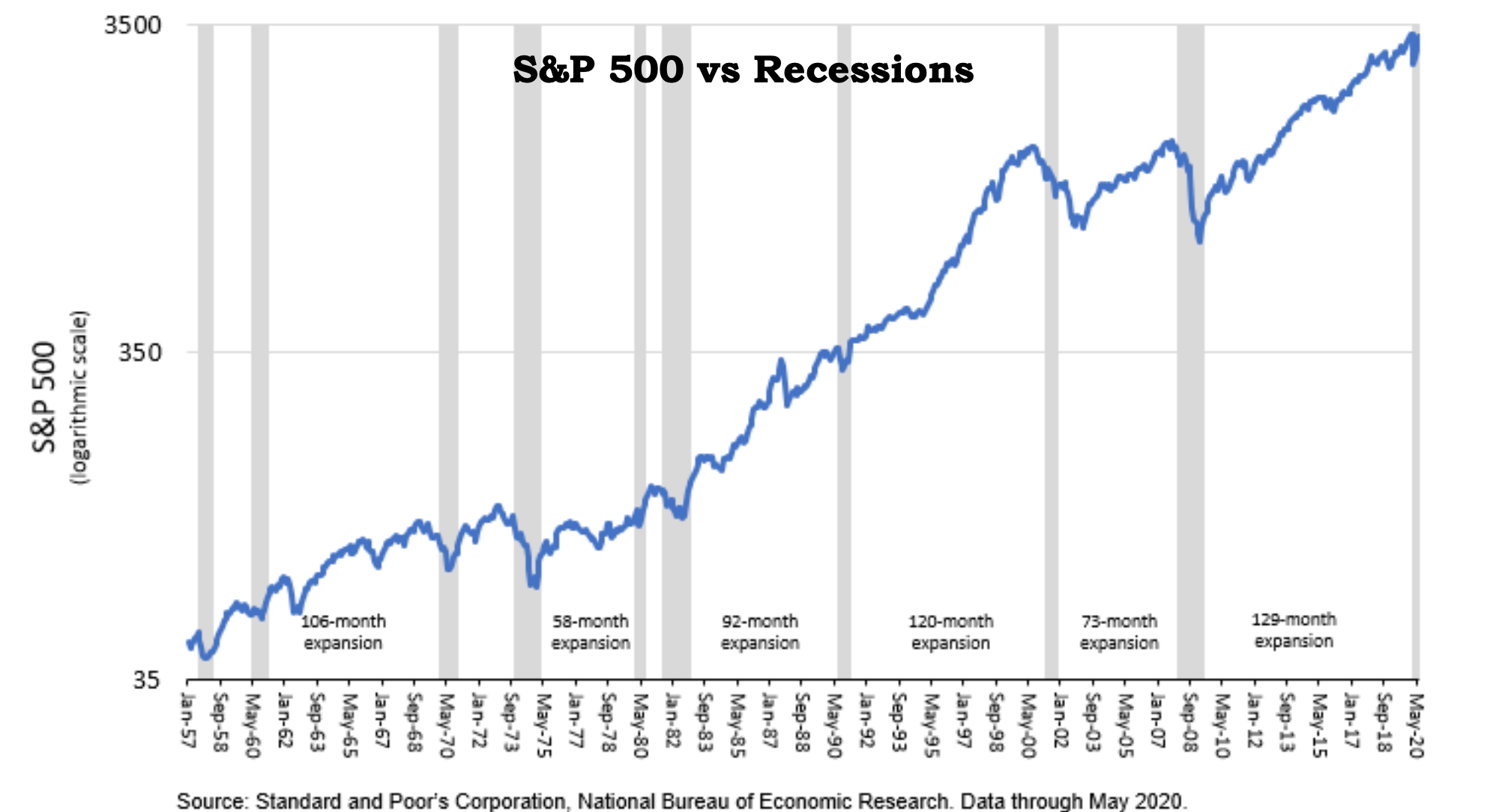 For investors wondering what to do, the answers are not that difficult.  Avoid trying to time the market, as it almost never works, and you can get whipsawed in the attempt.  Can you imagine selling in late March, or early April when things looked so dire, only to miss one of the greatest rallies in decades over the next few months?  Understand that long-term investing means long-term and requires a total and unemotional commitment to and belief in your plan (assuming you have one).  You must be willing to tune out the ever-deafening noise blasted constantly from the hyper-sensational financial media, and for goodness sake, never react to market conditions.  You should only change your asset allocation policy if your goals and circumstances change, not in response to market movements.  Many a failed investor believed they had to “do something” in the face of extreme market volatility, when the best course of action was potentially inaction.  Focus on what you can control and then give it a rest, knowing you have a sound plan in place and have done all you can do.  Then get on with the business of life.

Best wishes for a COVID-free summer.