Life is full of regrets; it is a part of living.  Some are private known only to us and others are public known to the entire world.  In thinking of some of the more public regrettable trades, a few quickly come to mind – Babe Ruth, Bret Favre, and Manhattan Island. 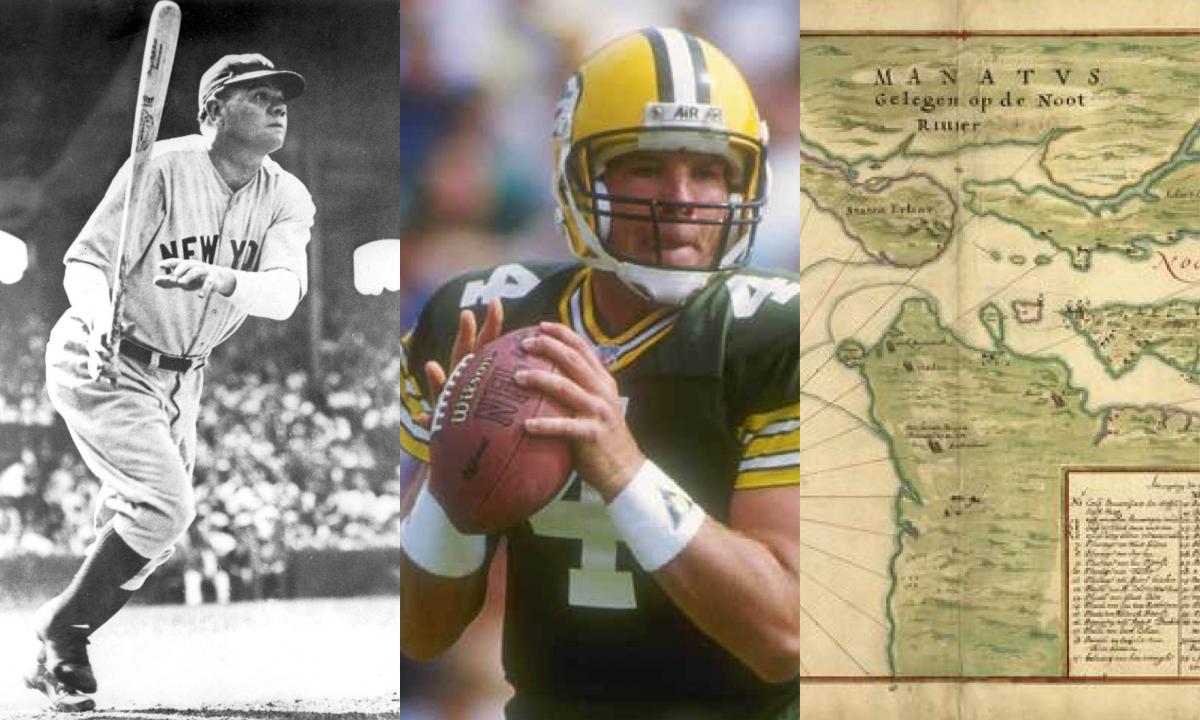 A member of three World Series championship teams from 1915 to 1919, George Herman “Babe” Ruth was traded by the Boston Red Sox to the New York Yankees in 1920. The move led to the start of the Sox’ 86-year championship drought, now known as the “Curse of the Bambino”,  a superstition named for the team’s (in hindsight) foolish trade. Over the next 15 years Babe Ruth would help the Yankees win seven American League pennants and four World Series championships, going down as one of the best to ever play the game.

After only one year with the Atlanta Falcons, Bret Favre was traded in 1992 to the Green Bay Packers where he became one of the most durable and successful quarterbacks in NFL history. He won the NFL MVP award a record three consecutive times and still holds numerous other records. The hapless Falcons went through an astonishing 16 starting QBs during Favre’s 15-year stint in Green Bay and have yet to win a Super Bowl.

And then there is the story of the Canarsee of the Lenape who traded Manhattan Island to Peter Minuit and Dutch colonists on May 24, 1626 for trading goods worth $24 ($15,000 today).  In defense of the Canarsee, it was tradition at the time for gifts to be made for safe passage through their lands or for temporary occupation by visitors, and most American Indians did not view land as something one could “own” since it was not portable.

So, what do all of these trades have to do with our current environment?  Given the market’s visceral reaction to the Covid-19 pandemic, in which stocks fell an unprecedented 34% in 35 days, investors may have been tempted to trade their equity holdings for the relative safety of cash. Anyone who acted on that temptation potentially traded the innumerable and perpetual benefits of permanent wealth creation for the siren song of safety and price stability.  Once you step off the wealth creation train, it is hard to get back on board, especially if the price of a ticket has gone up.  Those who bought the shares others were rushing to sell, may have made the most astute trade of 2020.  Of course, the year’s not over and anything can happen, but we are getting closer to a vaccine, effective therapeutic drugs, and an eventual return to normalcy.

Readers of this blog know that we believe equity ownership should be viewed as permanent and not something to jump in and out of as markets and emotions wax and wane.  Such market-timing efforts almost never work and finding oneself on the wrong side of the wealth creation/destruction track is too great a risk.  As of this writing, equities have recovered almost all their losses from the first quarter’s selloff.  Will they continue upward throughout the year given current lofty valuations and the many uncertainties?  No one knows and that is the point.  The historical excess returns produced by equities is because of that uncertainty and volatility.  If there was no volatility their returns would be the same as risk-free securities.  The most liquid, safe, and least-volatile security is the 90-day U.S. Treasury bill which is currently yielding 0.10% (1/10 of 1%).  The 10-year U.S. Treasury note is yielding 0.67%.  It may be difficult to achieve life’s meaningful goals with guaranteed returns that are actually negative, after adjusting for taxes and inflation.  Exchanging permanent wealth creation for temporary principal stability could be a most regrettable trade.