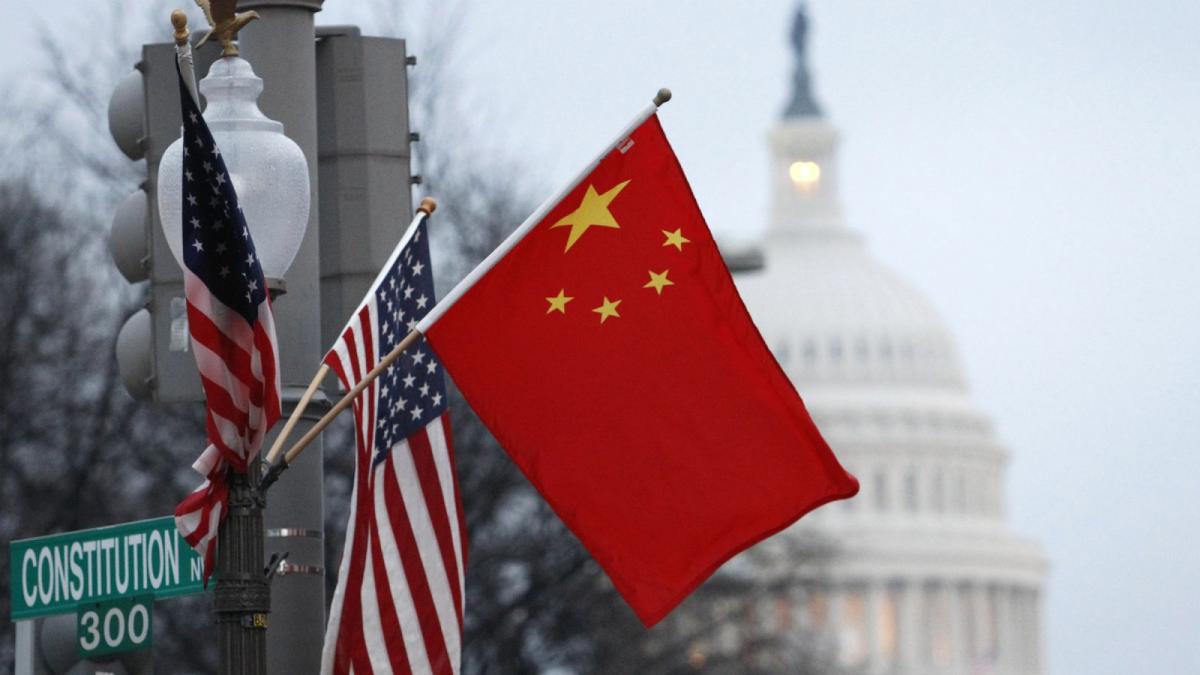 The first quarter of 2018 was a tale of two periods – January, which was great, followed by not so much.  In the wake of 2017, the market’s extraordinary gains paired with unprecedented low volatility, was almost too much to expect for it to continue into 2018, yet that is exactly what happened, briefly.  The market took on an almost parabolic dimension in January after the tax reform bill was signed into law in late December.  Professional pundits started predicting a market “melt-up” as already robust earnings forecasts were being revised even further upward.  Many investors lost interest in managing risk and some even contemplated increasing their equity allocations altogether.  Record after record fell and the market became frothy with a feeling that it was getting too easy to make money in stocks, which of course, is not true and never a good sign.  And then everything changed. 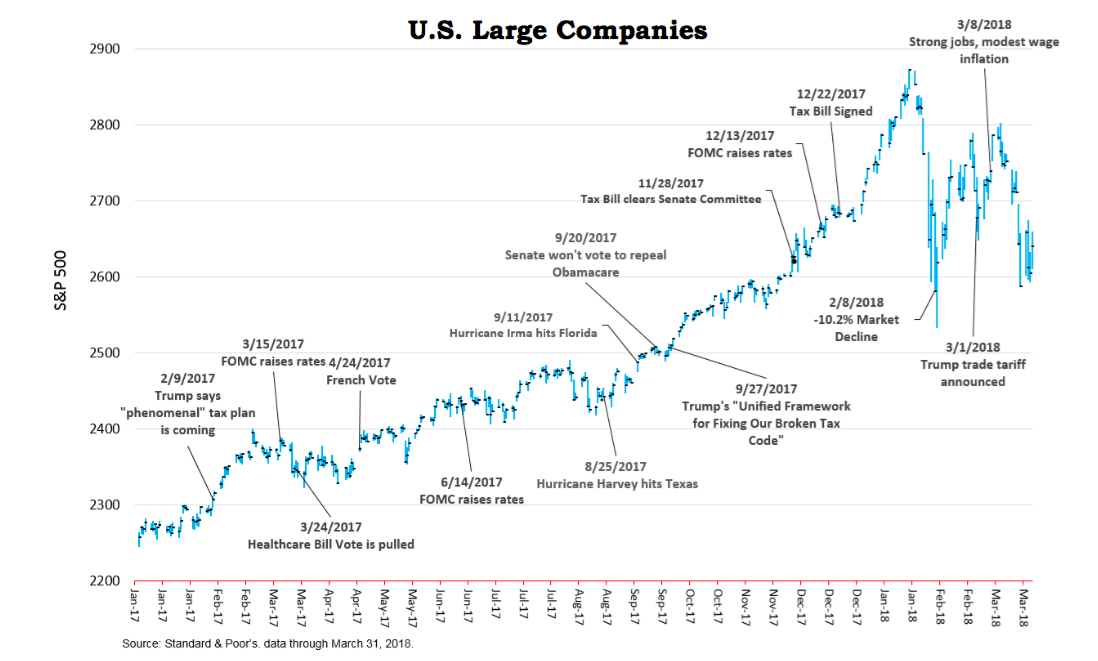 A lack of volatility was replaced by extreme price swings based on the news of the day, real or fake.  Investors seemed torn between a conviction that the market was over-due for a pull back and yet, poised to move ever higher due to improving economic fundamentals.  In mid-January the market opened higher and closed lower with its biggest intra-day reversal in over two years.  Nevertheless, the year’s first month closed out with impressive gains, continuing the momentum from 2017.  However, January’s optimism was short-lived as fears of inflation and rising interest rates took over and the year’s first official 10% correction was in the books by the close of the market on February 8th.  Then in early March, President Trump announced he would impose tariffs on all imported steel and aluminum and investors responded as expected.  The coup-de-grace was an avalanche of bad news for those companies that comprised the market’s leading performers and largest sector, technology.  By the time the first quarter of 2018 ended, broad-based U.S. equity markets posted losses for the first time in ten consecutive quarters.  Not a bad run.

Large (S&P 500) and medium-size (S&P 400) U.S. companies each lost about -0.75% but smaller companies (S&P 600) bucked the trend with gains of 0.57% for the period. This is probably due to the belief that smaller companies are typically more insulated from trade wars. On the international front, emerging markets (MSCI EM) held onto their gains and finished the quarter up 1.42% whereas the more developed markets (MSCI EAFE) lost -1.53%.

The Federal Reserve’s Open Market Committee (FOMC) met twice during the quarter, most recently under new Fed Chairman Jerome Powell.  At the first meeting on 01/31 they voted to leave rates unchanged, and then at their March meeting with Powell at the helm, they voted, as expected, to increase the Federal Funds rate 0.25% to a range of 1.50%-1.75%.  This was the sixth-rate increase since this round of credit tightening began in December 2015.  Current bets are for a total of three rate hikes in 2018 and another three in 2019 with the Fed funds “terminal dot” at 2.9% by year-end 2019. 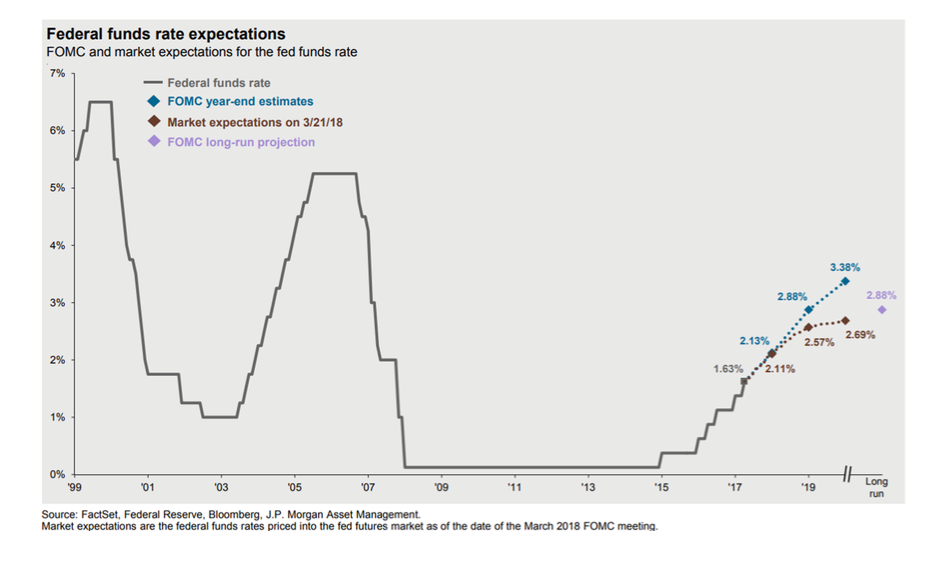 Interest rates have risen slightly across the yield curve this year resulting in modest losses in most bond portfolios.  Our bond benchmark (Bloomberg Barclays 1-5 Year Govt/Credit) lost -0.50% for the quarter. Remember, bond prices move in the opposite direction of interest rates.  The longer the maturity, the greater the sensitivity of the underlying bond to changes in market rates.  Wealthview Capital has long-held to a capital preservation strategy with our bond portfolios.  This is due to the historically low interest rate environment in which we find ourselves and our preference to seek returns through equities, not fixed-income which we view as our safe-haven assets.  We currently utilize bonds to temper the volatility of an otherwise all-stock portfolio which hopefully, allows the owner to stay fully committed to their equity allocation.  We believe few investors can tolerate the downsize exposure of 100% equities and many will abandon an otherwise prudent investment program at the worst possible time.

The U.S. economy remains strong and stable.  4th quarter GDP (Gross Domestic Product) was revised up to 2.9% in the third and final reading.  This means three consecutive quarters of about 3% growth as compared to the prior “new-normal” which assumed a maximum growth rate of 2%.  The 65 economists surveyed monthly by the Wall Street Journal now believe the next five quarters’ GDP will average 2.7% compared to 2.2% for the prior eight years (post-recession).  Additionally, growth estimates for global economies are being revised upward, all of which portends future economic prosperity.

The U.S. unemployment rate is now 4.1%, much lower than the pre-recession low of 4.4%.  Job openings remain at an all-time high and the NFIB Small Business Optimism Index just hit an all-time high.  This is an index of small mom and pop companies that are the back-bone of our economy.  The main reasons given for their optimistic outlook were lower taxes and reduced regulations.  Additionally, real wages (net of inflation) are growing at the fastest rate of any of the four prior economic recoveries (Brookings Institute).  Consumers with more money to spend should bode well for the economy. 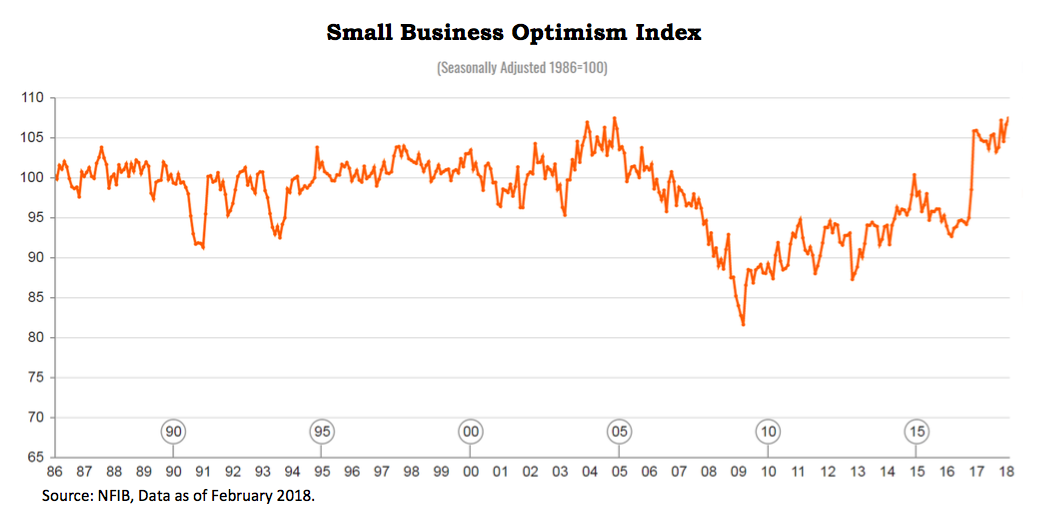 1Q18 earnings estimates call for a year-over-year gain of 17% after a record upward revision of 5.4%.  Estimates are typically revised lower as analysts tend to err on the side of caution in their forecasts.  Even without the boost from lower corporate taxes earnings are believed to have grown by double-digits in 1Q18.  The recently battered technology sector is set to post a 1Q18 earnings gain of 22%!

Investors are always concerned with the market’s valuation.  Are stocks over-valued, under-valued or fairly-valued?  Current S&P 500 per share earnings estimates for 2017, 2018 and 2019 are $132.34, $158.08 and $173.84 respectively (Yardeni Research, Thomson Reuters, S&P, IBES).  With the S&P 500 trading around 2,600 that equates to a forward-looking P/E (price/earnings multiple) of 16.5x and 15x respectively for 2018 & 2019, well within the long-term averages, given current interest rates and inflation.  In addition to investing for future growth, companies with rising earnings often buy back shares and increase dividends, both of which enhance underlying share value. 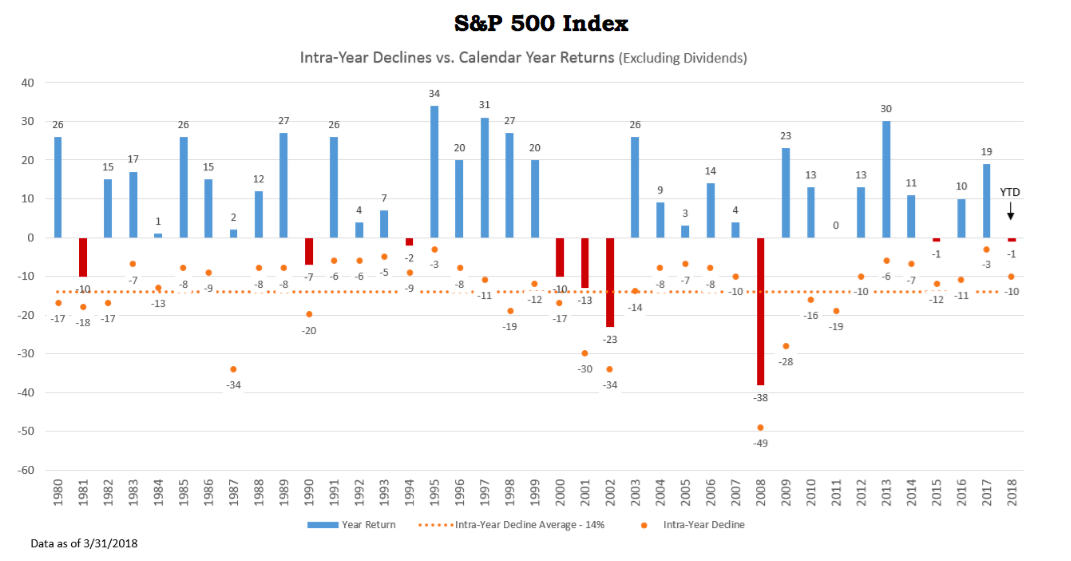 As of this writing the market seems fixated on fears of trade wars as retaliatory tariffs, or talks of such, between China and the U.S. increase.  This is a no-win game and cooler heads will probably prevail before the world’s economies come crashing down.  Fears also abound about technology valuations, higher inflation, interest rates and saber rattling by North Korea to name a few.  There will always be something about which to worry and long-term equity investing is not for those who go through life looking under every rock for a land mine.  Equity investing is for the optimists who want to participate in the growth of the worlds’ economies and understand that owning the greatest companies the world has ever known is the single best method to create long-term, sustainable, inflation-adjusted wealth. The professionals at Wealthview and our clients understand and embrace this truth.