As we lapped the one-year anniversary of the COVID-19 pandemic the U.S. economy and financial markets continued their remarkable turnarounds, propelled by twin turbo engines of easy money policies from the Federal Reserve and over $5 trillion in stimulus packages from Congress with potentially more on the way. Most states began lifting restrictions on travel, social gatherings, schools, restaurants, stores, places of worship, etc. and anxious, pent-up consumers were more than willing to do their part to help stimulate the economy. Millions of vaccines are now being administered daily and it is only a matter of time before we reach herd immunity.  Consumer confidence rose in March to its highest level since the pandemic started and marked the third-consecutive monthly increase but remains below pre-pandemic levels. 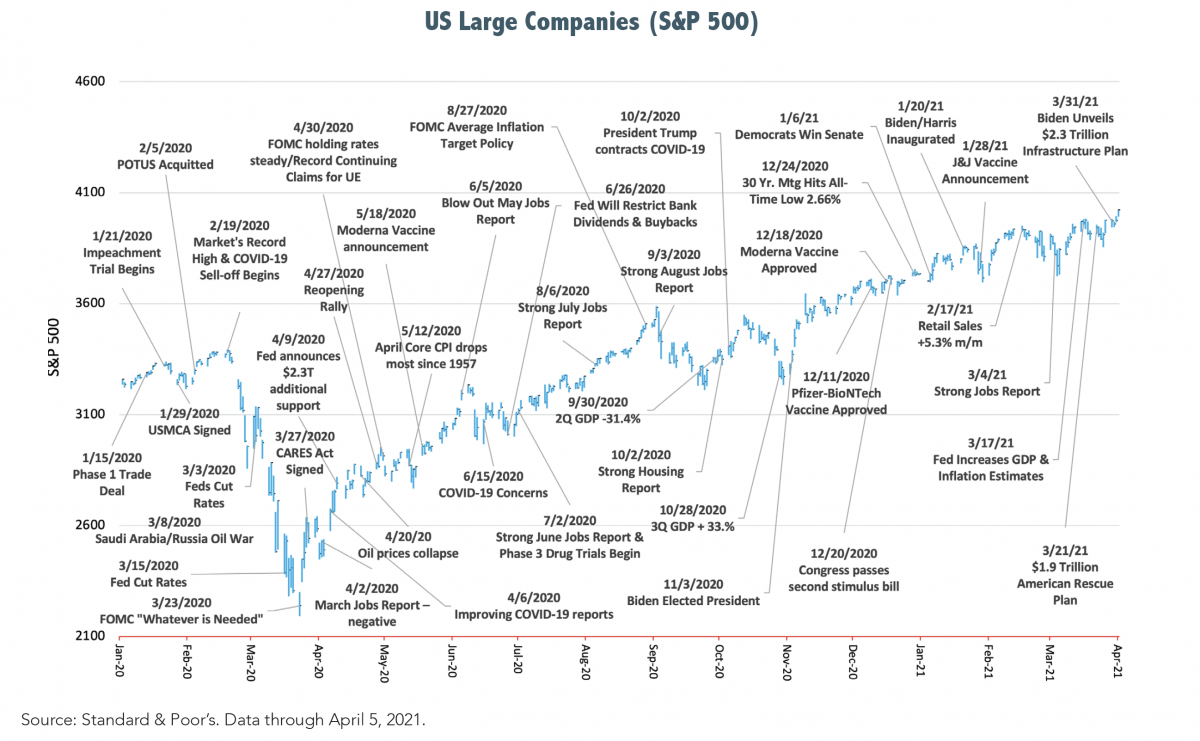 Equities demonstrated impressive momentum during the quarter as investors gained renewed confidence that the pandemic will soon be in the rear-view mirror and the economy back to normal, albeit a new normal.  All three major U.S. indexes (DJIA, S&P 500 & NASDAQ Composite) hit record highs late in the quarter with the Dow Jones Industrial Average surpassing 33,000.  It was only last quarter that the DJIA surpassed 30,000 for the first time.  U.S. small-cap companies (S&P 600) led the pack in Q1 with outstanding total returns of 18.24%, followed by U.S. mid-caps with stellar gains of 13.47%.  Large companies (S&P 500) took a back seat to their smaller cousins, but still delivered handsome returns of 6.17% during the period.  Developed and emerging international markets brought up the rear with gains of 3.48% and 2.29%, respectively. 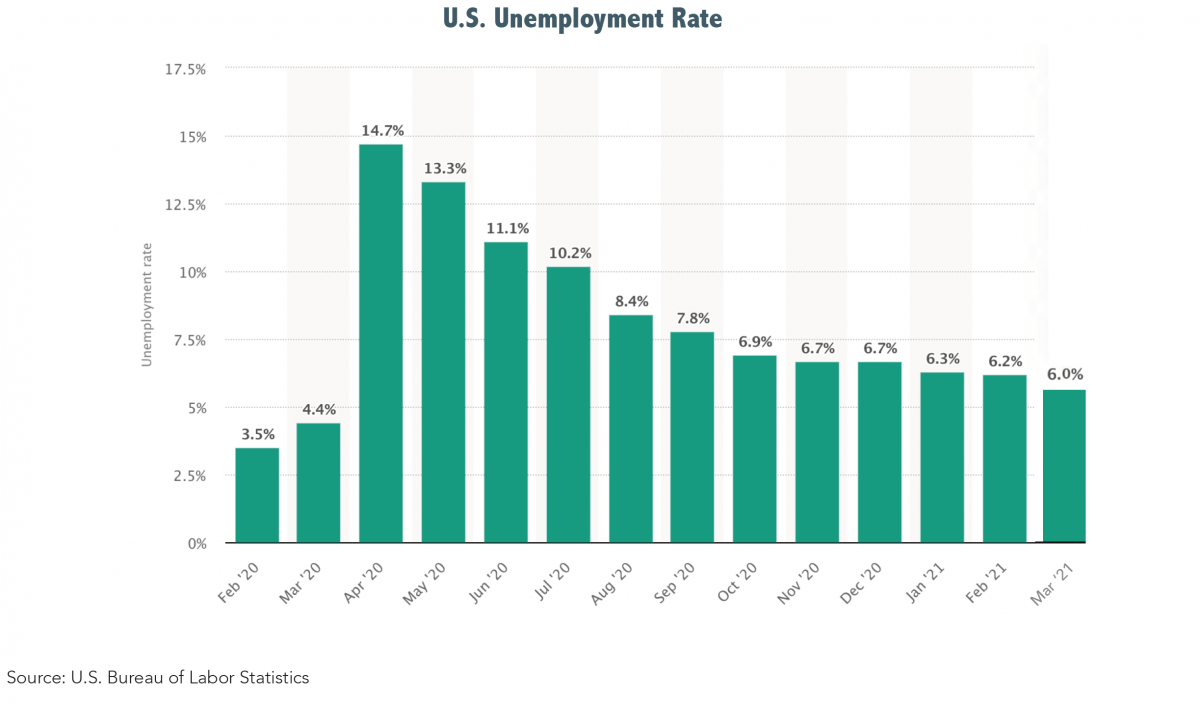 The employment situation steadily improves as evidenced by initial claims for unemployment which dropped to their lowest level of the pandemic in late March as stronger hiring and consumer spending propel an economic revival. Non-farm payrolls increased in March by a much larger than expected 916,000 jobs, January and February payroll estimates were revised upward, and the unemployment rate dropped to 6.0%.  The unemployment rate is down considerably from its April 2020 peak but is 2.5 percentage points higher than its pre-pandemic level in February 2020. The number of unemployed persons, at 9.7 million, continued to trend down but is 4.0 million higher than in February 2020.  Numerous economists believe the recovery is shifting into high gear, and conditions are falling into place for a further acceleration into the summer as we move close to or reach herd immunity.

Economists surveyed by The Wall Street Journal in early March raised their average economic growth forecast for 2021 to 5.95% as measured from the fourth quarter of last year to the same period this year. This was up from a 4.87% estimate in February’s survey. If the revised forecast proves accurate it would mark the fastest pace in nearly four decades, following last year’s steep downturn. In the final months of 2020, GDP (gross domestic product) advanced at an annual rate of 4.3%, up from an earlier estimate of 4.1%, according to the Commerce Department.  In the Fed’s Summary of Economic Projections, released 03/17/21, it tilted up its median estimate of 2021 GDP to 6.5% from an earlier 4.2%, tilted down its median unemployment estimate to 4.5% from 5.0% and tilted up its median estimate for the PCE inflation rate to 2.4% from 1.8%. Interestingly enough, what didn’t change was the Fed’s target range for the fed funds rate which held steady at 0.00% - 0.25% through 2023.

Interest rates, after bottoming in March 2020, made significant moves upward and investors began focusing on the elephant in the room, inflation, which is being pressured on numerous fronts.  Our short-term bond benchmark, Bloomberg Barclays 1-5 Year Credit lost -0.57% during the quarter which is to be expected given an increase in rates.  Remember, bond prices usually go down when interest rates rise. However, over the past 12 months, that index gained 5.93%, far out-pacing cash, money market funds and short-term bank CDs.  Accommodative monetary policies and “go big, go fast” fiscal policies are starting to give some investors reason for concern, while others see them as jet fuel to a blow-out economic recovery.

The $1.9 trillion American Rescue Plan signed into law on 03/21/21, along with the trillions of stimulus dollars that preceded it have ignited inflation fears.  That is a lot of money chasing goods and services and in some sectors, demand is outstripping supply.  In 2020 supply shortages began appearing as factories closed and companies furloughed or laid off workers in response to the global economic shut-down. Now, with demand picking up bottlenecks are starting to appear, adding to inflation concerns.  In a twist of logistical fate, the 1,312-foot container ship, Ever Given ran aground in the Suez Canal on March 23, blocking hundreds of other container ships and further delaying the delivery of supplies globally.  With increased economic activity, oil prices rebounded from the low $20s per barrel reached last year to $60+ per barrel today leading to increased prices at the pump. Should Congress enact a federal gas tax as is being discussed, consumers will feel additional pain in their pocketbooks.  And finally, as the quarter ended, President Biden announced his plans for an eight-year, $2.3 trillion infrastructure program to be funded by increases in individual and corporate taxes.

The Federal Reserve repeatedly reaffirms its intent to maintain its program of monthly bond purchases and its policy of basement-level interest rates until the coast is clear.  They seem to define clear sailing as some point in time after which inflation will average 2%, not hit 2%, which had been their long-held inflation target.  How high prices must go before we average 2% is anyone’s guess and it may not matter.  If the market suspects inflation is becoming a problem, it will not wait for the Fed to act. Lowering of interest rates, while an effective tool, is an artificial economic stimulant and once the Fed removes the punch bowl, some fear the party might end too abruptly, leaving many investors with a Fed-induced hangover. It is interesting to note that the 5-year breakeven inflation rate is now 2.53%, the highest it’s been since July 2008. The 5-year breakeven inflation rate implies what the market thinks inflation will be, on average, over the next five years. 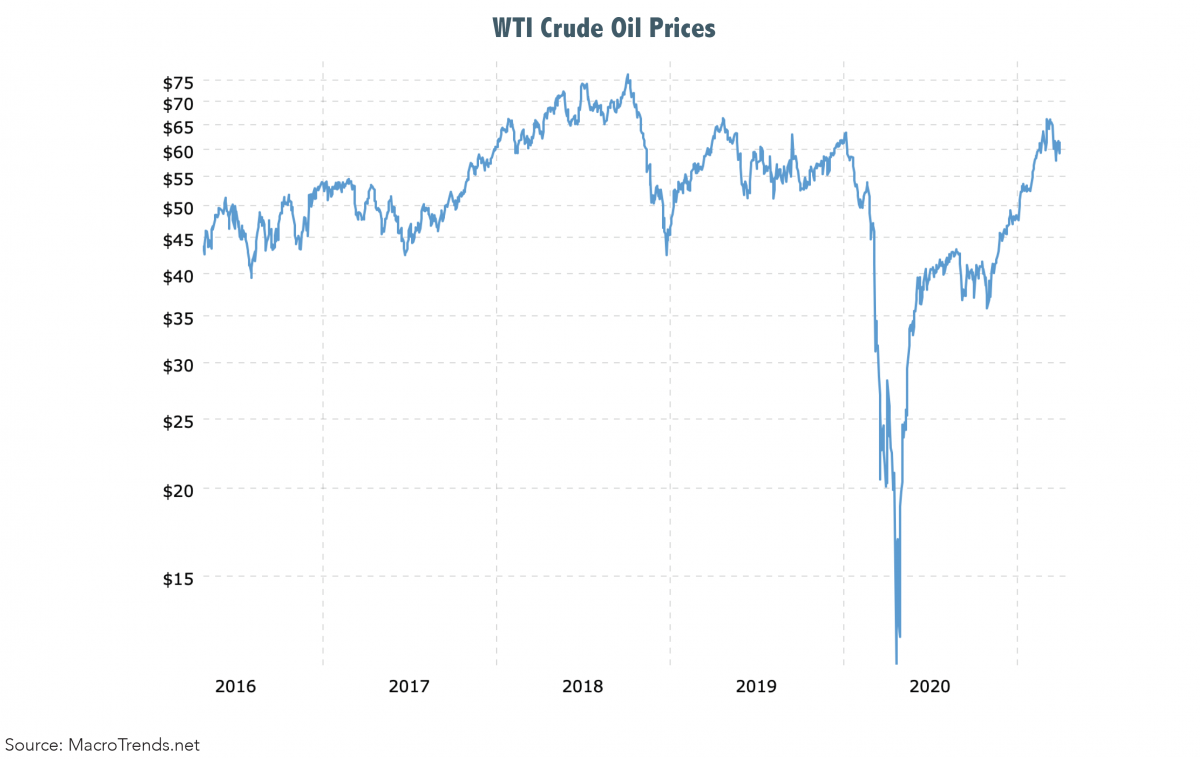 Will the twin turbo chargers of fiscal and monetary policy continue to fuel super-sonic growth, or will we sputter to an abrupt halt from an inflation and tax-induced stall? There are many predictions from just as many pundits, and no one knows for certain.  Investors with an intelligent financial plan that balances their need for growth and/or income with their desire to minimize risk, do not give it much thought.  Plans that anticipate variable return possibilities, funded by investment strategies consisting of broadly diversified, low-cost, tax-efficient portfolios and guided by the advice of seasoned professionals help successful investors stay committed through economic and market cycles without reacting impulsively.

Best wishes for a great spring,