Markets typically don’t like uncertainty and if there is one word to describe the current geopolitical environment, that would be a good choice.  The cascading flood of mixed messages concerning the United States’ trade policies are making it difficult for investors to gain clarity on the prospects for relations with our global trading partners. One week it’s steel and aluminum and then it’s foreign investments in U.S. technology or threats against any country that buys oil from Iran. Then, that most quintessential of American brands, Harley-Davidson, announced its moving manufacturing of foreign-sold motorcycles overseas and will not pass along higher costs from EU retaliatory tariffs to its customers.  While good news for Hog buyers, shareholders fear lower profits from compressed margins.  The news drove HOG shares right into the ditch, skidding -6% on the day and crashing down -27% from January’s high, giving new meaning to the phrase – Pigs get fat, hogs get slaughtered!

As zany as the current political climate is, it may be distracting many investors from the incredible economic expansion still underway as evidenced in the May jobs report which saw the creation of 223,000 new jobs, compared with the 2018 monthly average of 191,000.  Unemployment, at 3.8%, is at an 18-year low and the Labor Department reported there were 6.6 million job openings in May.  For the first time on record, there are more unfilled jobs than there are unemployed Americans! 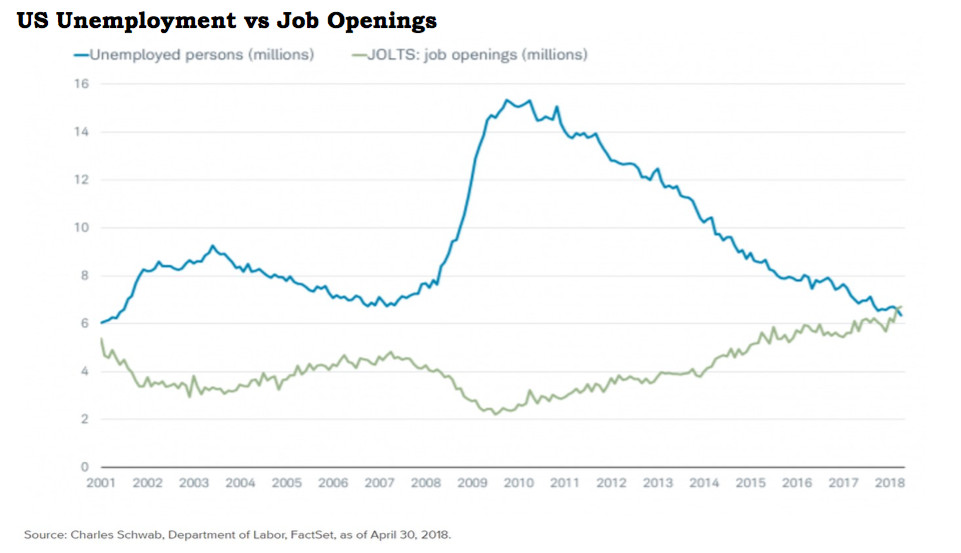 Economic growth, as measured by GDP (Gross Domestic Product), is at current expansion highs (we are now moving into our 10th year of this economic expansion).  First quarter 2018 GDP grew 2% (less than expected) but it is up 2.8% year-over-year, and the consensus forecast for the second quarter is around 3.5%, with whispers of 4% or even higher.  Inflation is starting to increase modestly, with the Fed’s favorite gauge, the core-PCE (Personal Consumption Expenditures) up 2% annualized in May compared to an average of 1.3% since 2011.  Wage gains (2.7% recently) continue to be offset by increases in productivity and other structural factors such as an aging population spending less, cheaper imports due to globalization and the “Amazon effect” of consumers spending less for goods online.

Business confidence remains high and should translate into increased capital spending. NFIB’s (National Federation of Independent Business) most recent readings showed confidence at its second highest level ever.  In Q1 2018 non-residential fixed investment, a proxy for capital spending, was up 9.2%.  This is partly due to corporate tax savings being reinvested back into plants, equipment, etc. for future growth.  Additionally, consumer confidence remains high and retail sales jumped 0.8% in May (above consensus forecast of 0.4%), the largest advance since November 2017 and April data was revised upward to 0.4% from 0.2%.  Since consumer spending makes up over two-thirds of our economy, retail sales are a good indicator of economic conditions. 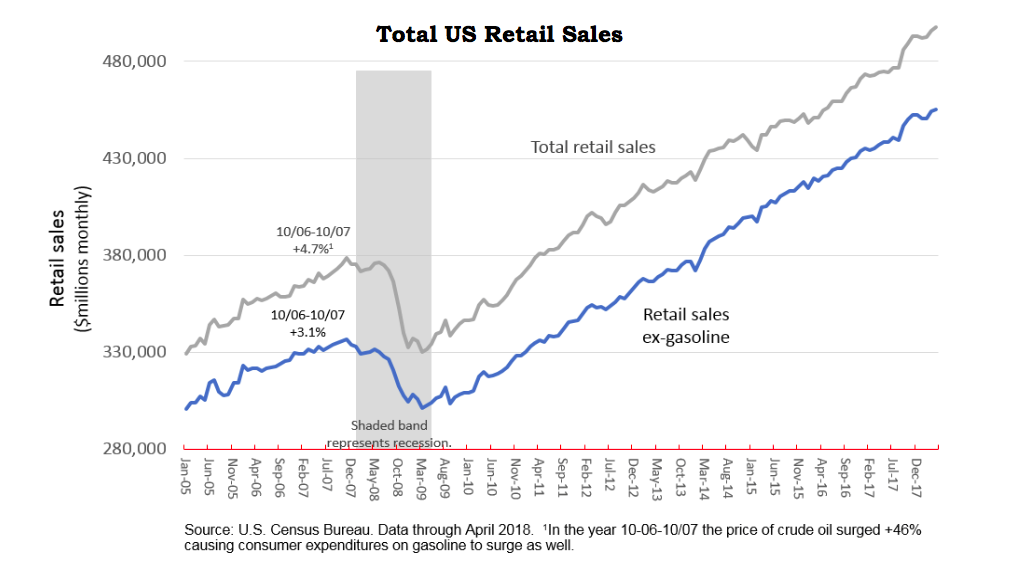 The market has been backing and filling ever since the February sell-off that followed January’s incredible run-up on the back of the Tax Cuts and Jobs Act of 2017.  Investors simply don’t know if another leg of this bull market is still in front of us or if we may have peaked for now.  Even though equities look like they have been trending sideways, U.S. stocks have produced modest to impressive gains depending on the sector.  The brightest stars so far this year, up 9.39% through the first six months, are small domestic companies (S&P 600) which are not as inter-connected globally as larger companies and therefore, less impacted by tariffs and a strong U.S. dollar. International markets are not faring as well as their American cousins due to fears of trade wars and the strength of the U.S. dollar.  A strong dollar makes U.S. goods more expensive for foreign buyers and can greatly impact emerging markets.

Current 2Q 2018 earnings estimates for the S&P 500 call for a 5.9% gain over record Q1 2018 earnings and a whopping 26.3% gain, year-over-year, as compared to Q2 2017. May 2018 dividends from the S&P 500 companies of $6.55 per share ($55.8 billion) set a monthly record. The first 5 months of 2018 saw 197 companies increase their dividend, with the average dividend increase being 13.67%.  Given the positive sentiment of the business environment and availability of cash, more dividend increases or share repurchases seem feasible.

Short-term rates are finally back above the inflation rate, resulting in a positive “real return” for the first time in a decade.  As the economy expands and inflation approaches the Fed’s target, the pace of interest rate hikes by the Federal Reserve appears to be quickening. The FOMC (Federal Open Market Committee) has raised rates twice so far this year and is indicating two more rate hikes by year-end which would bring the fed funds rate to around 2.25%-2.50% at that time.  However, the Fed thinks both GDP and inflation will moderate in 2019-2020, primarily due to a fading of the sugar-high produced from the Tax Cuts and Jobs Act of 2017.

Interesting to note is that while the Fed was raising short-term rates, market rates initially increased but have since backed off slightly.  This is probably due to the uncertainly surrounding our trade relations that created a modest flight to quality reaction.  The 10-year US Treasury note which hit 3.12% on May 17 is now 2.85%. With market rates up since the beginning of 2018, bond prices have come down to compensate.  Our bond benchmark, the Bloomberg Barclays 1-5 Year Government/Credit index is off -0.33% for the year. 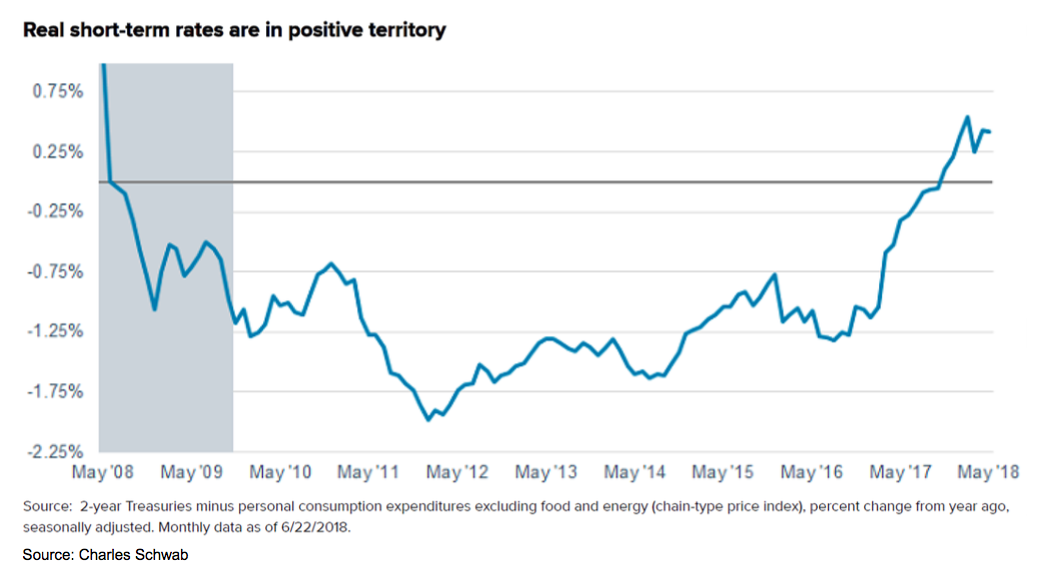 The U.S. economy is in great shape, despite the barrage of negative noise perpetually generated by financial journalists, who wouldn’t know a great economy if they were living smack in the middle of one, which of course, is exactly the case.  Sadly, many investors believe if they read it the Wall Street Journal, New York Times or USA Today then it must be true. Financial news media are in the business of selling news and nothing sells like negative, sensational news with fear always the best seller. Intelligent investors train themselves to tune it all out and focus on things they can control.  They plan, execute, monitor, adjust as needed and then move on.  By spending too much time reading, watching, and listening to this toxic flow of negativism, one can become paralyzed with indecision.  Once paralyzed, sustained progress towards your goals is immediately halted. 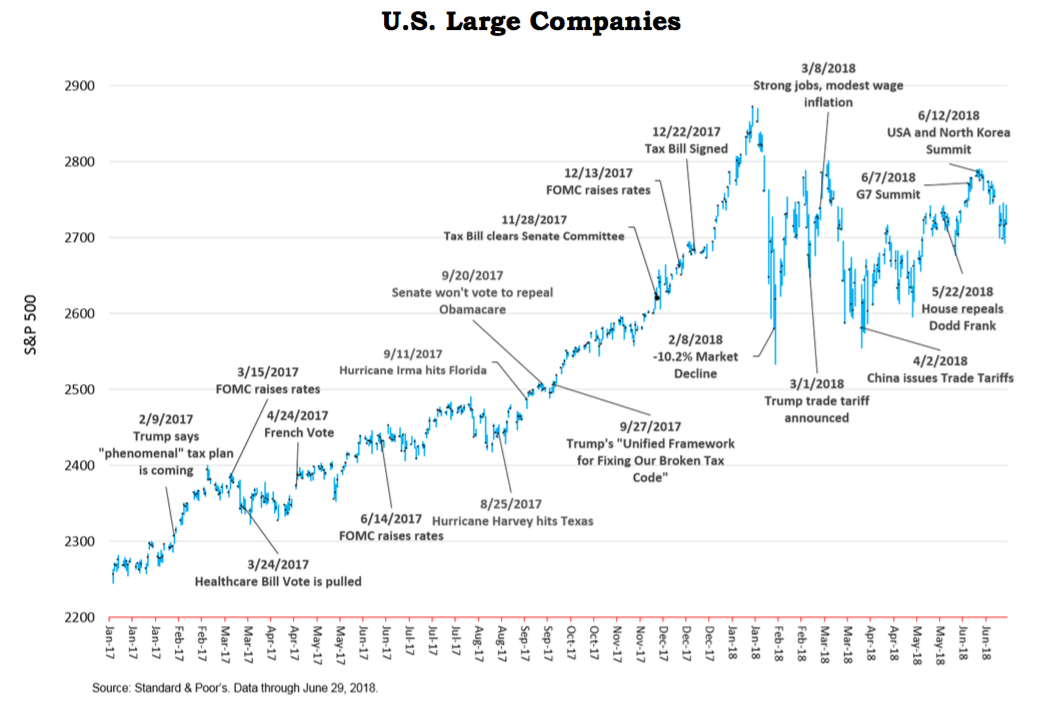 There will always be things about which we can worry and the concerns de jour happen to be escalating trade wars, slowdowns in foreign economies, rising interest rates and inflation among others.  Will earnings continue their impressive growth and pull share prices along, or will the fed over-cook interest rates, invert the yield curve and cause the next recession?  Will Amazon take over the world?  Will LeBron James become basketball’s first billionaire? Who knows? Finally, Walgreens replaced GE in that elite group of 30 companies that comprise the Dow Jones Industrial Average, proving that all good things eventually do end.  GE was the last of the original DJIA companies, with an impressive 110-year membership.

Best wishes for a great summer and don’t forget the sunscreen.