December 24th marked the one-year anniversary of the 20% bear-market in the S&P 500. Nervous investors sold stocks fearing the Federal Reserve would catapult the U.S. economy into a recession when it followed through on its commitment to continue raising interest rates in the face of slowing economies at home and abroad.  The selloff began in October when Federal Reserve Board Chairman Jerome Powell stated that the Fed was a “long way from neutral”.  It then gained momentum in December after the Fed reaffirmed its 3% fed funds target and hiked rates for the fourth time in 2018, the eleventh increase in three years.  Christmas eve, 2018 ended on a sour note with a blow-out to the downside that left soot in most investors’ stockings.  Then, just two days later, we witnessed one of the largest single-day rallies in history, setting the stage for 2019 to become a phenomenal year for equity investors.  Far from recession, our economy is in a very good place. 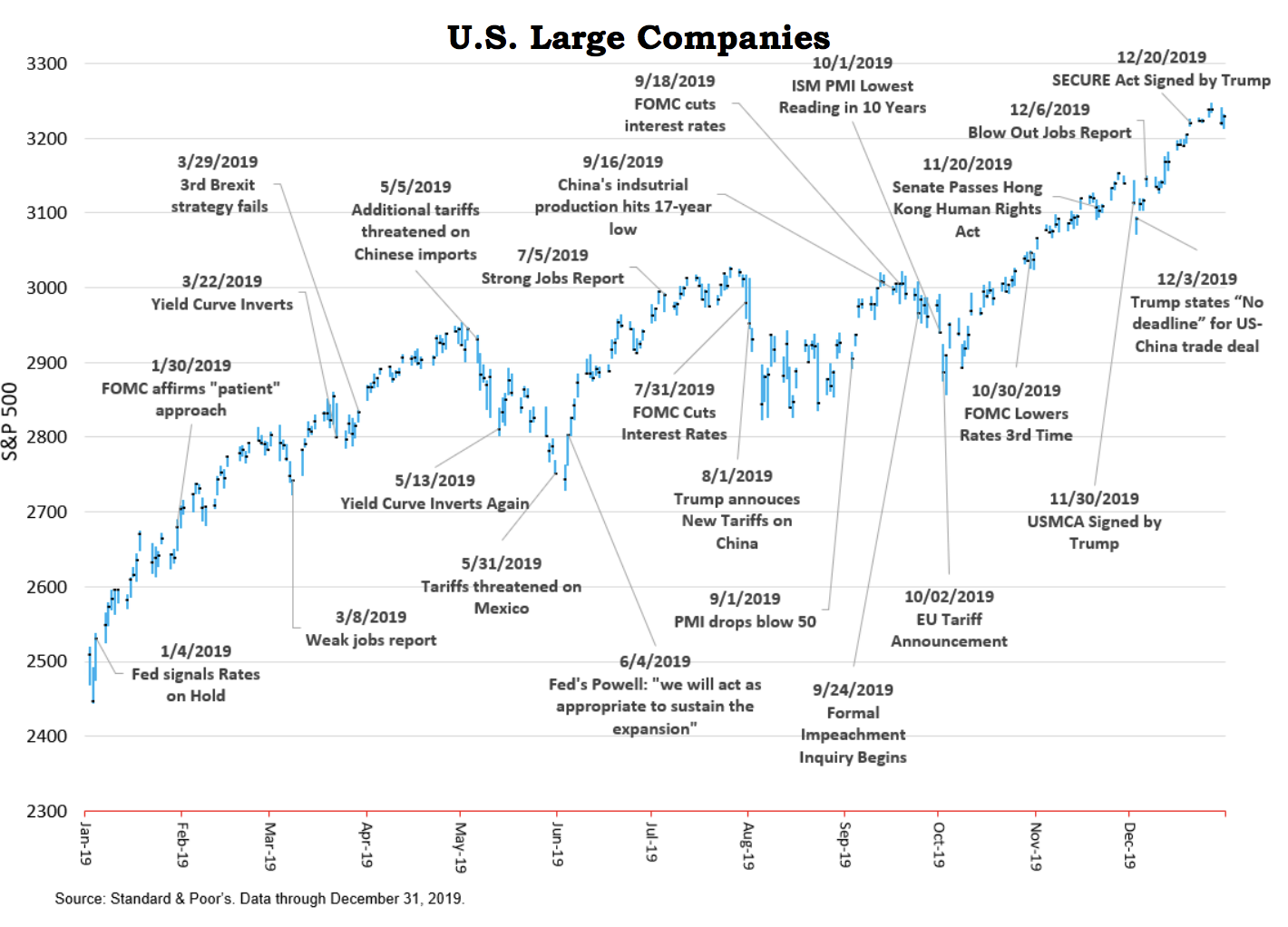 2019 turned out to be such a great year partly because the Fed took notice of that Christmas eve blow-out and reconsidered its credit tightening position.  At its March 2019 meeting the FOMC (Federal Open Market Committee) indicated it would hold rates steady and halt the shrinking of its balance sheet by September, exactly two-years after that process started.  Then in June, Fed Chairman Powell said, “we will act as appropriate to sustain the expansion” which investors interpreted positively.  What followed over the course of the year was a most impressive rally that reclaimed all the bear market’s losses and then some, closing out 2019 within all-time highs.  Investors who postponed their planned equity purchases or worse, sold their holdings fearing a temporary recession, did so to their own chagrin.

Patient and committed investors were rewarded handsomely throughout the year, including the fourth quarter. For the full year 2019, large U.S. companies (S&P 500) delivered an astounding 31.5% total return, followed by mid-cap U.S. companies (S&P 400) up 26.2%.  You know it was a good year when the worst major performer, emerging markets (MSCI EM), gained 18.4%.  Returns for the 4th quarter did not disappoint and were led by emerging markets (MSCI EM) +11.8% due to reduced trade tensions.  Even bonds produced decent returns for 2019 as falling interest rates boosted total returns.  Our short-term fixed-income benchmark, Bloomberg Barclays 1-5 Year Government/Credit gained 5.01% for 2019.

The yield curve inverted during 2019 bringing with it, doomsday recessionary predictions. An inverted yield curve means short-term rates move above longer-term rates and often precedes a recession; the key word being “often”, but not “always”.  In this case it did not happen as the Fed was able and willing to act in time to keep our economic engine running. The FOMC first paused, then reversed course from its credit tightening stance, reducing the fed funds rate three times in the second half of the year to a current range of 1.50% - 1.75%. The yield curve returned to a positive slope and the economic expansion, now the longest on record, continues. 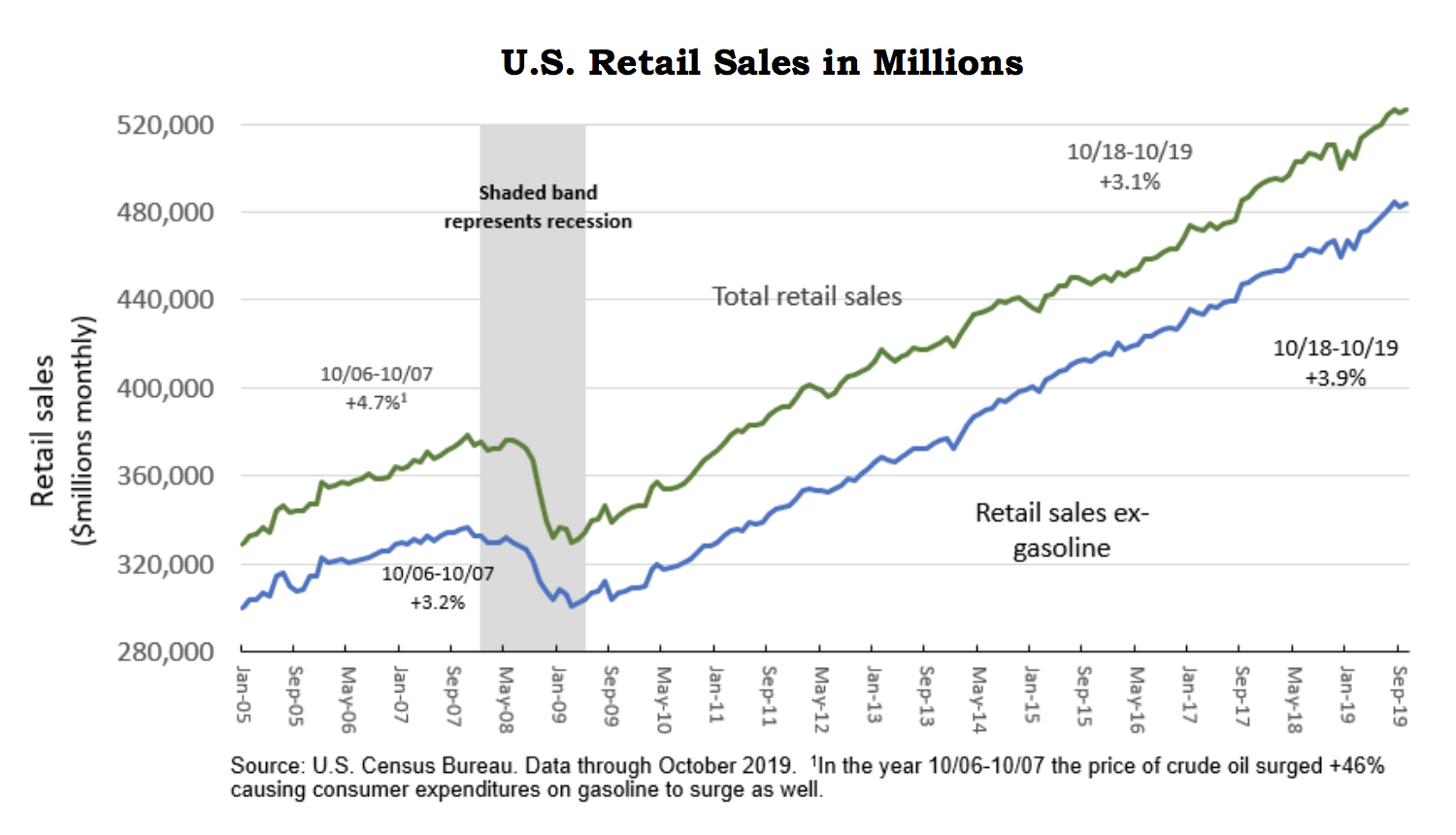 Wealthview’s crystal ball is not always reliable, but a recession does not appear to be on the immediate horizon, primarily due to the strength in consumer spending which comprises about 70% of the U.S. economy.  Fed Chairman Powell said last month that the Fed expects the U.S. economy to continue growing at a solid pace, though it faces risks from trade tensions and slower growth overseas. Of course, it won’t continue growing indefinitely, but it can continue for a long time.  How long is anyone’s guess.  In another recent address Powell said “…the U.S. economy is in a very good place.”

The economy is indeed in a very good place as evidenced by the state of the American consumer who is in great shape financially. Households have cleaned up their balance sheets from the Great Recession and their financial obligations ratio is very strong at an almost record low of 15%, leaving lots of disposable income for discretionary purchases. Additionally, they increased their personal savings rate to 7.8% which is far above post-recession period averages and bodes well for future spending.  All of this is due to numerous factors including a strong jobs market, low inflation and historic low interest rates which act like a tax cut for borrowers.  The current 3.5% unemployment rate is close to the December 1969 record low of 3.4%. 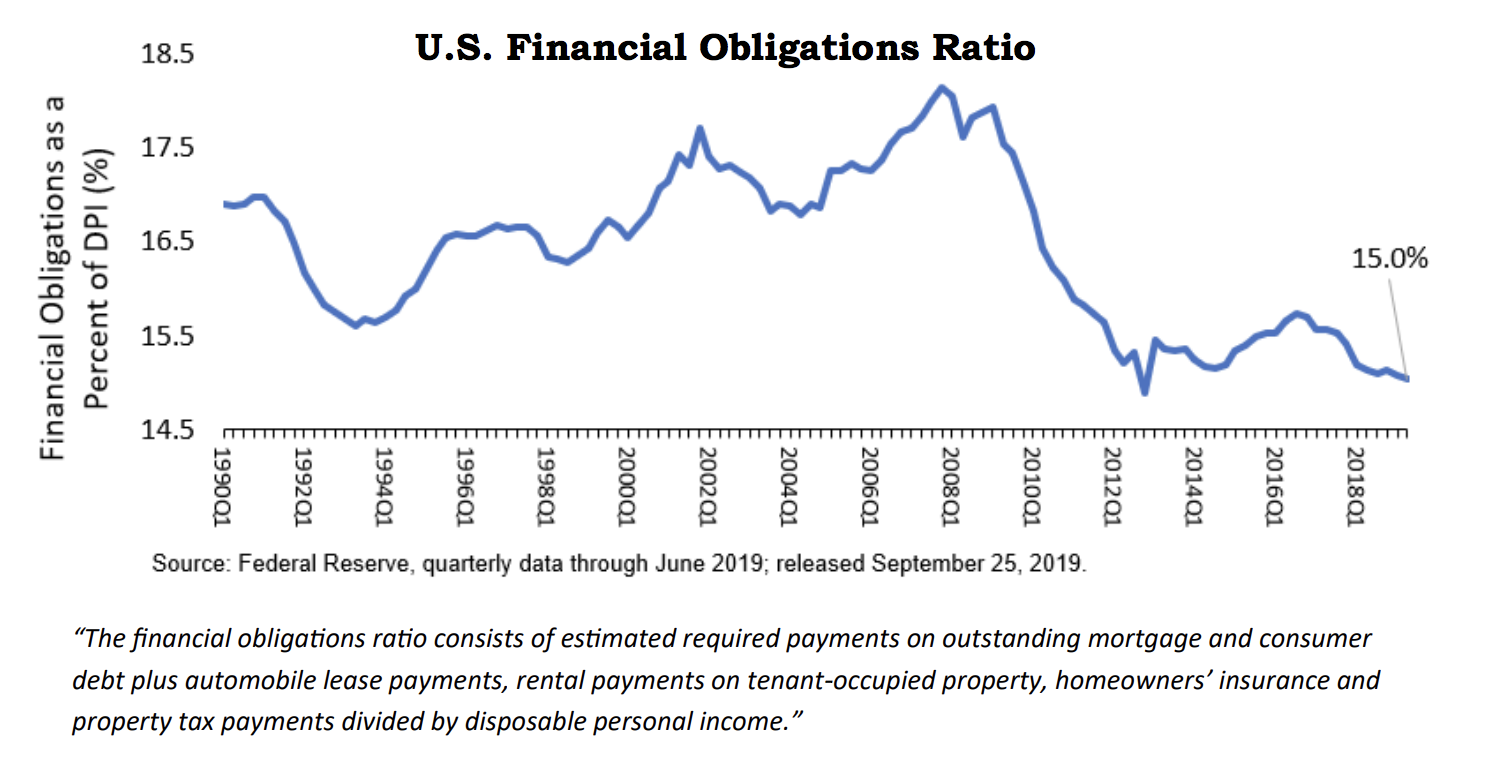 The U.S. economy grew 2.1% (annualized, after inflation) as measured by GDP (Gross Domestic Product) in 3Q-19, slightly below the 2.3%, 10-year post-recession trend, but a very respectable number.  4th quarter numbers have yet to be released, but the current estimate by the Atlanta Fed is 2.3%, up from an earlier estimate of 2.1%.  The Small Business Optimism Index is strong, consumer sentiment is high, the LEI (Leading Index of Economic Indicators) suggests continued expansion and inflation expectations are falling.  Current soft spots are in manufacturing and exports, both small components in our $20 trillion economy.  Sales drive earnings and earnings drive equity prices.  Earnings for the S&P 500 companies are projected to grow approximately 10% in 2020.  This number may prove too optimistic, but even a 5% earnings growth rate combined with a 2% dividend yield could produce a 7% total return in equites, nothing for which to apologize after the gains achieved in 2019.  Global GDP, after falling in 2019 to 3.0%, is expected to re-accelerate in 2020 to 3.4%.

There will always be risks over which one can worry.  A few of the current concerns include trade tensions with China, slowing economies overseas, the presidential impeachment outcome and inflation among others. If the unemployment rate sinks further, it may be difficult for new job formations to remain at their current lofty levels because companies will find it increasingly challenging to fill vacancies. This could lead to wage pressures and eventually to rising inflation.  However, recent wage gains have not increased the inflation rate because of continued gains in productivity.  On a positive note, Congress demonstrated rare bi-partisanship recently in passing the long-delayed USCMA (US-Canada-Mexico Agreement) which replaces the poorly constructed NAFTA (North American Free Trade Agreement).  Congress also just passed the SECURE Act which, according to its name (Setting Every Community Up for Retirement Enhancement Act of 2019) is intended to improve retirement security options for millions of Americans.

Anyone who sold equities on 12/24/18 fearing a recession had perfect timing - perfectly wrong timing.  They sold on the very day the market bottomed, when they should have been buying.  Longtime bear David Rosenberg issued a statement on 12/21/18 stating that “the economy will be in a recession within a year”.  Well, here we are one year later, and the economy is hitting on almost all cylinders and he could not have been more wrong. Investors who acted on that worthless prediction missed out on one of the greatest opportunities for permanent wealth creation that we’ve seen in decades.  Moving their growth-dedicated dollars to the sidelines (into cash or other low-yielding “guaranteed” investments) more than likely “guaranteed” they will be unable to maintain or grow their real purchasing power, a major goal of long-term investing.

Our advice - ignore the sensational, panic-inducing media who believe their job is to highlight the negative, because nothing sells like negative news.  Instead, go against the herd mentality and develop a sound financial plan with goals funded by low-cost, risk-appropriate, tax-efficient investment strategies and then get on with the business of living.  It can also pay to seek the guidance of professionals whose career aim is to help you define and achieve your life’s goals.  To those who partnered with Wealthview in 2019 we extend our sincerest appreciation for allowing us to play a part in your financial future.

Best wishes for a prosperous 2020.