A Year Like No Other: 3rd Quarter 2020 Market Commentary 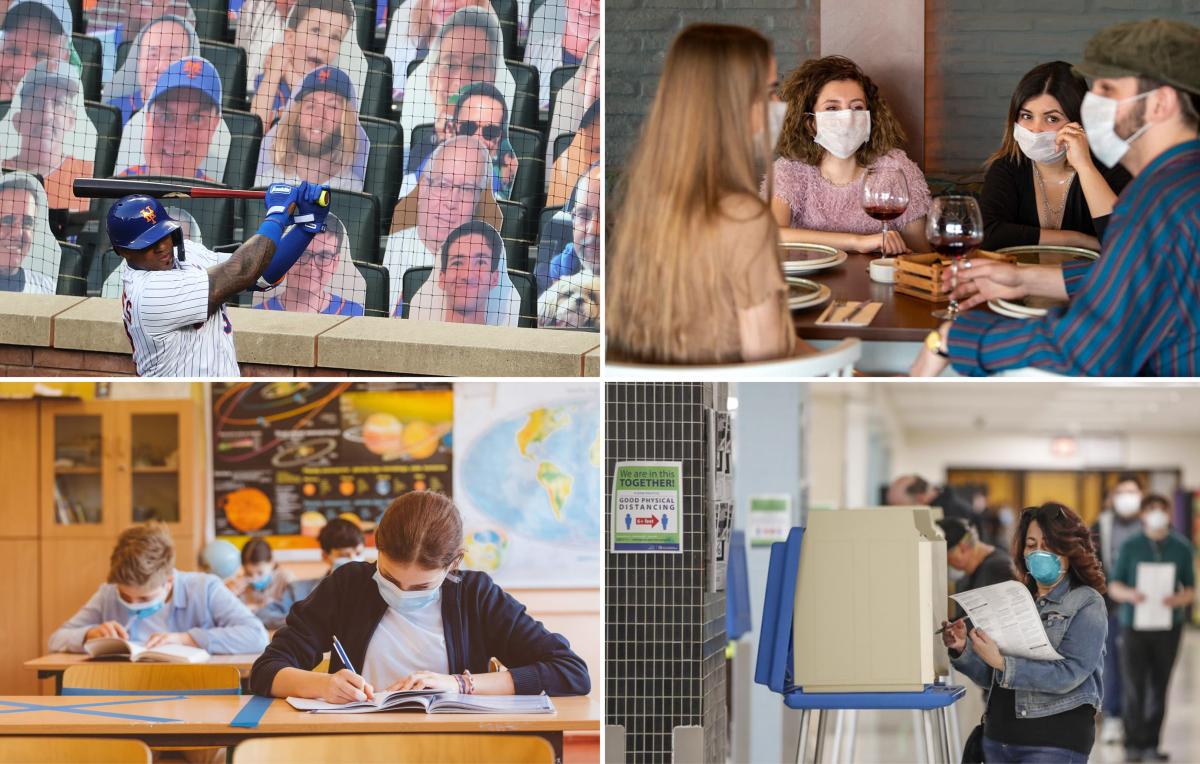 2020 has been a year like no other, and we still have three months to go. Thus far we have experienced a global pandemic, the highest unemployment rate since the Great Depression, the largest-ever drop in GDP (gross domestic product), nation-wide civil unrest, devastating hurricanes and wildfires, record-low interest rates and the fastest 35% stock market sell-off in history, followed by a complete recovery to new, all-time highs, then a 10% correction, followed by another rally.  Just as the fourth quarter got under way, the President and First Lady of the United States tested positive for COVID-19.  Hollywood could not create a movie with a more unbelievable script. 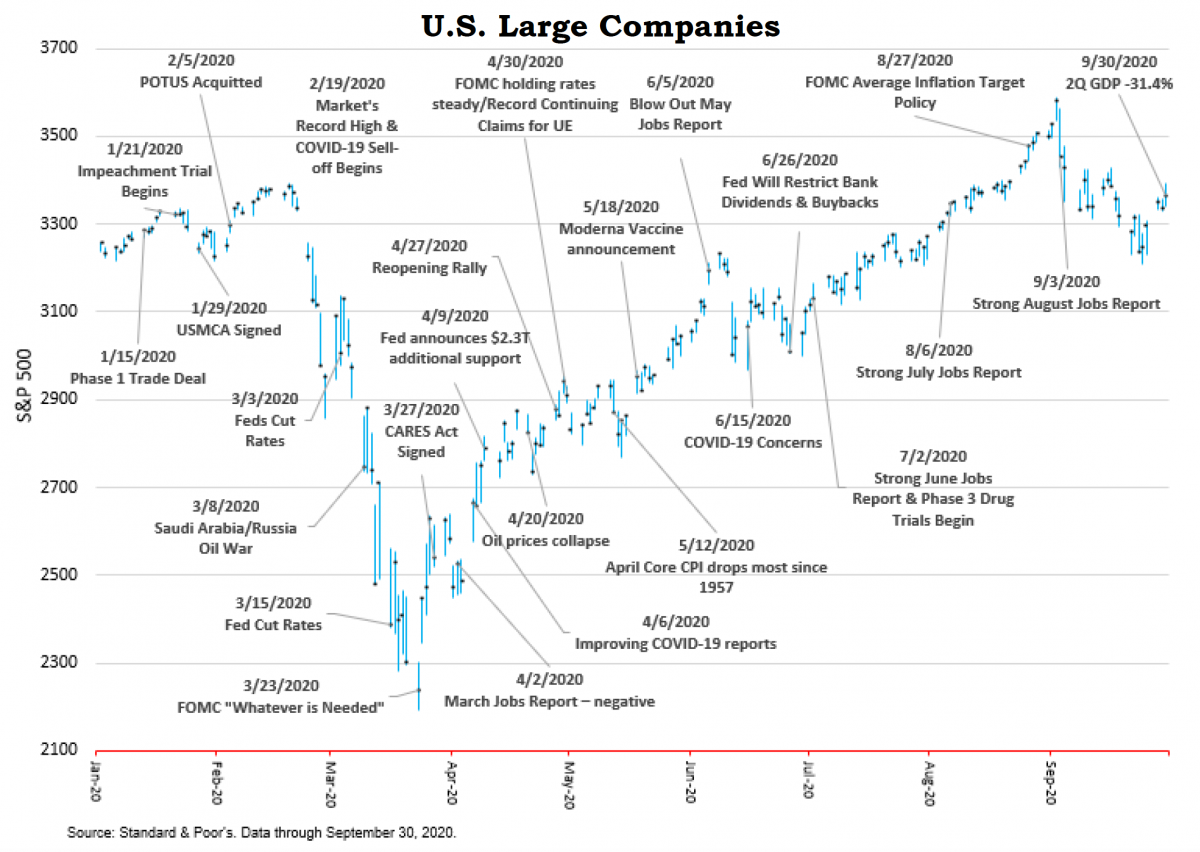 The S&P 500 and NASDAQ indexes hit all-time highs in mid-August, completely repairing the COVID-crash damage. The economy may not experience a V-shaped recovery, but thus far the stock market has achieved that feat.  On August 20th Apple had the distinction of being the first company with a market-capitalization of $2 trillion. Market-capitalization is the total valuation of a publicly traded company and indicates what it would cost to buy the entire company. In Apple’s case, that would be $2 trillion which is greater than the combined market-capitalization of all 2,000 companies in the Russell 2000 Index. The NAHB Housing Market Index reached an all-time high in August as builders saw increased demand for single-family homes and another 1.4 million jobs were created during the month dropping the unemployment rate to 8.4%.  Congress was bogged down mud wrestling over additional stimulus measures, so President Trump stirred the soup and signed an executive order extending enhanced unemployment benefits by $400 per week for six weeks beginning August 1. 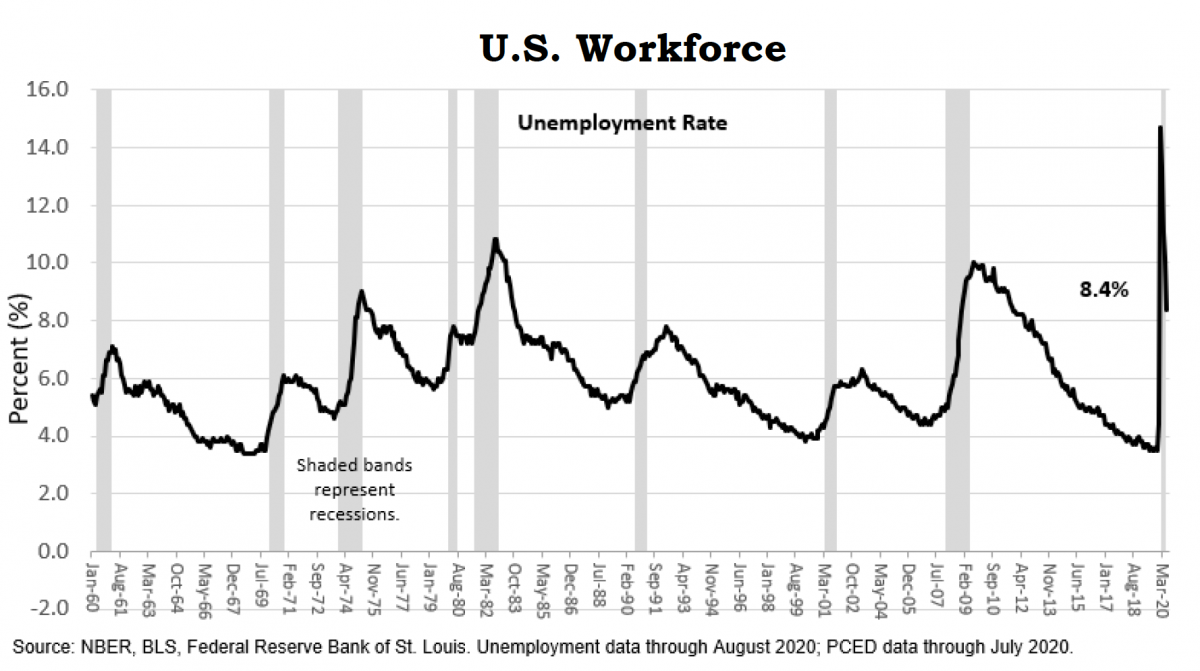 The Fed made an important announcement on August 27th that it was transitioning to an “average inflation target” policy.  This is a departure from its prior dual mandate to foster monetary conditions to achieve both stable prices and maximum sustainable employment.  Until recently, the Fed targeted a 2% optimal inflation rate, above which it would consider increasing interest rates, but inflation has failed to cooperate, running consistently below that number for years.  Now it appears the Fed will allow inflation to run above 2% concurrent with a drop in the unemployment rate so as to not inadvertently choke off the recovery.   The Fed views higher inflation as a more acceptable risk than potential deflation which can result from sustained recession-level unemployment rates.  Consequently, interest rates remain at all-time lows and the Federal Reserve keeps its foot on the economic gas pedal.  All indications are that they will continue their “pedal to the metal” policy for an indefinite period.

By September, equities started cooling off, possibly hinting at milder fall temperatures ahead.  The market gave back some of its earlier gains but still finished up, with large U.S. companies (S&P 500) gaining 8.93% and developed international markets (MSCI EAFE) up 9.56% over the past three months. The advances built on even bigger gains in the second quarter, producing the best two-quarter performance by large-cap U.S. companies since 2009.  Although small and mid-cap companies had a respectable third quarter, they have not fared well in 2020 as their fortunes are more dependent on a broadly based, robust economy.  Once the pandemic subsides and the economy recovers, look for these companies to make up ground on their larger cousins.

The labor market continued its improvement throughout the third quarter, evidenced by another jobs report released after the quarter’s end, which showed progress, albeit at a slower pace.  The September unemployment rate dropped to 7.9% from August’s 8.4% rate as 661,000 jobs were created.  The labor market has now recovered about 12 million of the 22 million jobs lost from the pandemic induced shutdown, but that still leaves 10 million people unemployed and a lot of repair work ahead.  As the quarter ended the Federal Reserve announced the nation’s 33 largest banks will face restrictions on dividends and share buybacks for another three months, citing the need to conserve capital during the coronavirus-induced downturn. The action is intended to “ensure that large banks maintain a high level of capital resilience,” the central bank said in a statement. “The capital positions of large banks have remained strong during the third quarter while such restrictions were in place.”

Estimates for GDP (U.S. gross domestic product), the broadest measure of economic activity, indicate the economy grew at an annual rate of 30% or more in the third quarter. That would restore a large portion of output lost in the spring when the coronavirus outbreak prompted the global lock down. GDP fell at a 31% pace in the second quarter after a 5% drop in the first, so we are still digging out of a pretty deep hole.   Current forecasts call for a slowing in the fourth quarter to an annual rate of 2.5%.

The equity elephant in the room in 2020 has been the over-riding influence on the market by growth stocks and in particular, the mega-cap stocks, especially the so-called FAANG companies – Facebook, Apple, Amazon, Netflix and Alphabet (Google).  These and other hot stocks have become momentum plays and gained attention because of their counter-cyclical benefits during the current pandemic.  A good example is Zoom Video Communications which has zoomed (pardon the pun) in price as social distancing created a strong demand by businesses and individuals to connect virtually.  The more money chasing these stocks, the higher they go which attracts more money - until it doesn’t.  Many seasoned and experienced investors are not impressed, having learned well the risks inherent in momentum investing, chasing the hot-dot, or over-concentrating in a few companies or sectors.

Queued up for the fourth quarter is a contentious supreme court justice confirmation battle, the President’s own battle with COVID-19 and the November elections.  Will Congress pass another stimulus package?  Will there be a second wave of infections as we try to move toward normalcy?  Will we see an effective COVID-19 vaccine before year-end?  Will either party win control over fiscal policy and impose their will with taxes and government spending? How long will the Federal Reserve continue its accommodative monetary policy?  Will inflation finally break out above 2%?  Will interest rates remain low? Will taxes increase? Will earnings recover? Will the President and First Lady recover from COVID-19? Those are some of the unknowns around which investors must attempt to navigate an effective investment strategy.

Question - What’s an investor to do in response to this crazy and uncertain pandemic-induced environment?   Answer - Nothing in particular.  All prudent investment strategies should follow a well-constructed, intelligent financial plan that anticipates the unpredictable which would describe 2020 pretty well.  Successful investors are doing the same thing in 2020 that they did in 2019, which was the same as in 2018, etc.  That would be to plan, execute, monitor, adjust, and carry on.  It’s that simple.  Boring, but simple.  Simple, but effective.  The one thing they never do is respond to the news du jour or market conditions, with the exception of possibly buying more shares in the world’s greatest companies when their prices are down.  They might acknowledge the day’s news brought to them by the hysterical, screaming, crisis-obsessed media, but they then turn their focus back to their day jobs, families, friends and pursuits to help make a better world for themselves, their loved ones and those less fortunate.

Best wishes for a safe and prosperous fall.